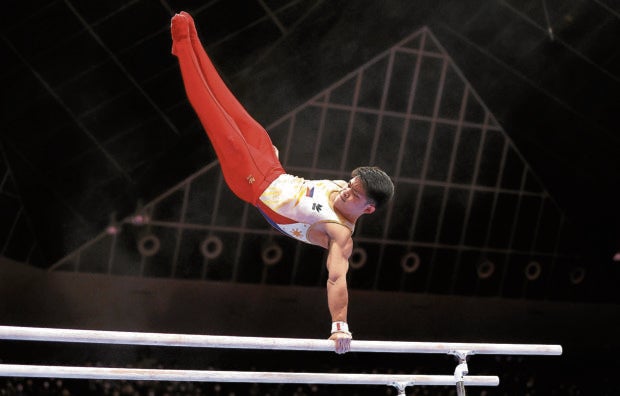 Two-time world champion Carlos Yulo will have an able team backing him in his bid for Olympic glory in Paris 2024. —REUTERS

Gymnast Carlos Edriel Yulo already possesses the tools that he needs to conquer the world. Now it’s time to build a team around him.

The Gymnastics Association of the Philippines (GAP), realizing it needs to bank on more than just Yulo’s pure talent, is close to finalizing a deal with a sports psychologist and a nutritionist dedicated exclusively for the two-time world champion.

“Having a sports psychologist is very important. We are now in the final stages of negotiation with Caloy’s psychologist as well as his nutritionist,’’ said Cynthia Carrion, the president of GAP.

Yulo is being eyed to chase Olympic glory anew in Paris 2024 after coming up empty-handed in Tokyo despite being an overwhelming gold favorite there.

Carrion flew to Kitakyushu, Japan, over the weekend and witnessed Yulo, who captured a gold medal and silver in the just-concluded World Artistic Gymnastics Championships. Yulo ruled the men’s vault, which is slowly becoming his new signature event, and finished with a silver in the parallel bars.

A team- or athlete-specific support staff is not a novel idea. Neither is it an untested one.

The boxing team to Tokyo, meanwhile, had a battery of coaches led by Australian Don Abnett and sports psychologist Marcus Manalo, with Aro also serving as nutritionist. The team bagged two silvers courtesy of Nesthy Petecio and Carlo Paalam and a bronze from Eumir Marcial.

The GAP hasn’t named the psychologist and nutritionist it is negotiating with but Carrion, who will attend the International Gymnastics Federation (FIG) congress and election next week in Turkey, where she is seeking a seat in the FIG board, has said she prefers someone already based in Japan, where Yulo currently resides.

Yulo’s vault and parallel bars triumphs are expected to generate incentives from the government. Republic Act No. 10699 or the National Athletes and Coaches Benefits and Incentives Act states that a gold medal in the world championship is worth P1 million while a silver could fetch P500,000.

The Philippine Sports Commission (PSC) said the 21-year-old champion will receive his bonuses despite a technicality that threatened to nullify the rewards.

“He will receive a bonus. Once it is recommended by GAP to the NSA (national sports association) affairs, they will endorse it to my office for board approval,’’ said PSC Chair William Ramirez.

The law Incentives Act states that world championships are only eligible for bonuses if at least 45 countries are participating in the event and it is held every two years. While 56 countries competed in the gymnastics worlds, the tournament is an annual event that skips Olympic years.

Because the Olympics was moved to this year due to the COVID-19 pandemic, this marked the first time in 25 years that the world championships and the Summer Games were held in the same year.

Several top gymnasts, including American superstar Simone Biles and other Tokyo Olympians, were absent from the world championships this year.

The last time the world championships was held was in 2019, when Yulo made history, winning the gold in the floor exercise. He finished fifth in that event this year, while failing to make the final of that discipline in the Olympics.

Meanwhile, Japanese gymnastics legend Kohei Uchimura said he would consider his future after finishing the world championships empty-handed on Sunday, but hinted his love for the sport may lure him back.

Uchimura finished sixth in the horizontal bar final—the only competition he entered this week to save wear and tear on his ailing shoulders.

The world championships were being held in his hometown of Kitakyushu in western Japan, and some had speculated that he would call time on his storied career afterwards.

But the 32-year-old shrugged off talks of retirement, saying the competition had refueled his fire.

“I can’t say anything about retirement at the moment—I need to take a rest and think about it,” said Uchimura, widely considered to be the best male gymnast in history. “I was reminded tonight just how much I like gymnastics. I’m not feeling right now that I don’t want to do it anymore. I was reminded how interesting it is.”

Uchimura dominated gymnastics for most of the previous decade, winning successive all-around Olympic titles in 2012 and 2016 and claiming 10 world championship golds.

But injuries have slowed him down in recent years.

—WITH A REPORT FROM AFP INQ