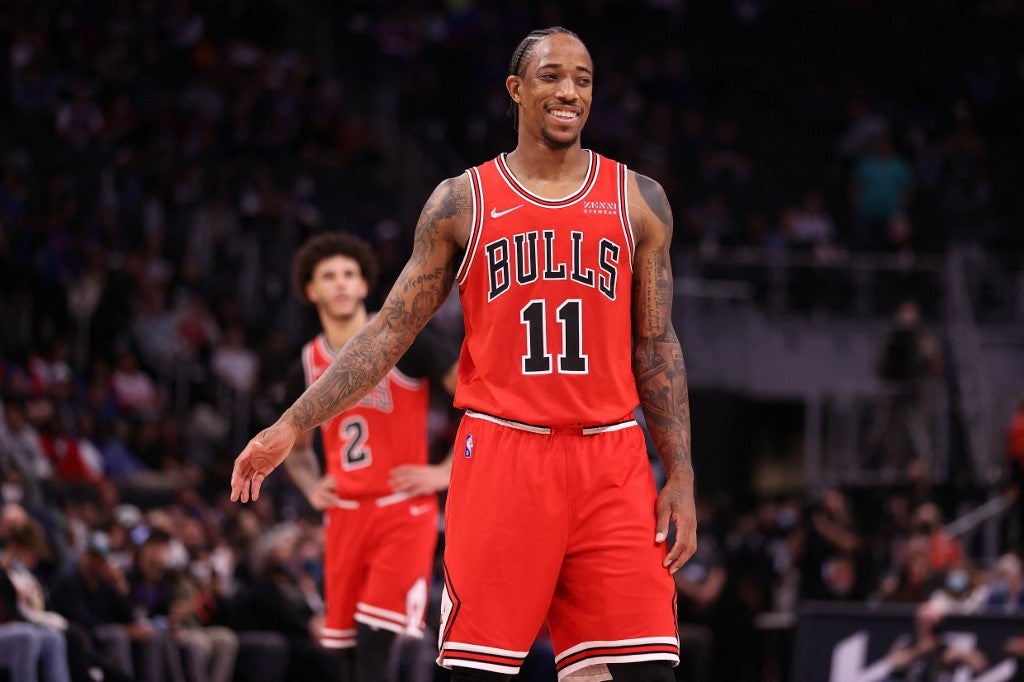 FILE – DeMar DeRozan #11 of the Chicago Bulls smiles in front of Lonzo Ball #2 while playing the Detroit Pistons during the second half at Little Caesars Arena on October 20, 2021 in Detroit, Michigan. Chicago won the game 94-88. Gregory Shamus/Getty Images/AFP

DeMar DeRozan led all scorers with 32 points, including a late game-clinching dunk, to lead the Chicago Bulls to a 107-99 home victory against the Utah Jazz on Saturday night.

The Jazz rallied to make it a game after falling behind by 17 points, but just didn’t have enough to overcome the Bulls in the final minute en route to their first loss of the season. The 4-0 start had been Utah’s best since the 2006-07 season.

Zach LaVine scored 26, Nikola Vucevic contributed 16 points with 12 rebounds, and Lonzo Ball added 11 points as the Bulls rebounded from their first loss of the young season to win for the fifth time in six games.

DeRozan: 32 PTS
LaVine: 26 PTS@DeMar_DeRozan and @ZachLaVine lead the charge for the @chicagobulls in their impressive home dub 🐂 pic.twitter.com/3iJFi6cKSz

Donovan Mitchell topped Utah with 30 points, including 22 in the first half although he shot just 3-for-15 in the second, and Rudy Gobert amassed 17 points, 19 rebounds and three blocked shots to lead the Jazz. Jordan Clarkson chipped in with 16 points off the bench, while Bojan Bogdanovic added 14 points.

The Jazz, who travel to Milwaukee for a game Sunday evening, played without All-Star point guard Mike Conley Jr. who took the night off for right knee injury maintenance.

Utah led 57-54 after the first half before Chicago seized momentum in the third quarter with a DeRozan-fueled 7-0 run. The Bulls, who led 79-72 after three quarters, opened the fourth on a 9-2 spurt and then stretched their lead to 17 at 94-77 after a LaVine alley-oop dunk with just over six minutes remaining.

Utah answered with an 11-2 run, with two 3s by Calrkson and another from Bogdanovic, to pull within 96-88 with 4:22 remaining. Shortly after, the Jazz crept within five points — 98-93 with 2:13 left — after a Gobert dunk and another Bogdanovic dunk.

Bogdanovic scored another bucket at the 47.3 mark to make it 105-99, and then had a chance to cut that lead in half. However, Bogdanovic missed his 3-point attempt and DeRozan iced the the Bulls’ win with a dunk with 21.9 seconds left.