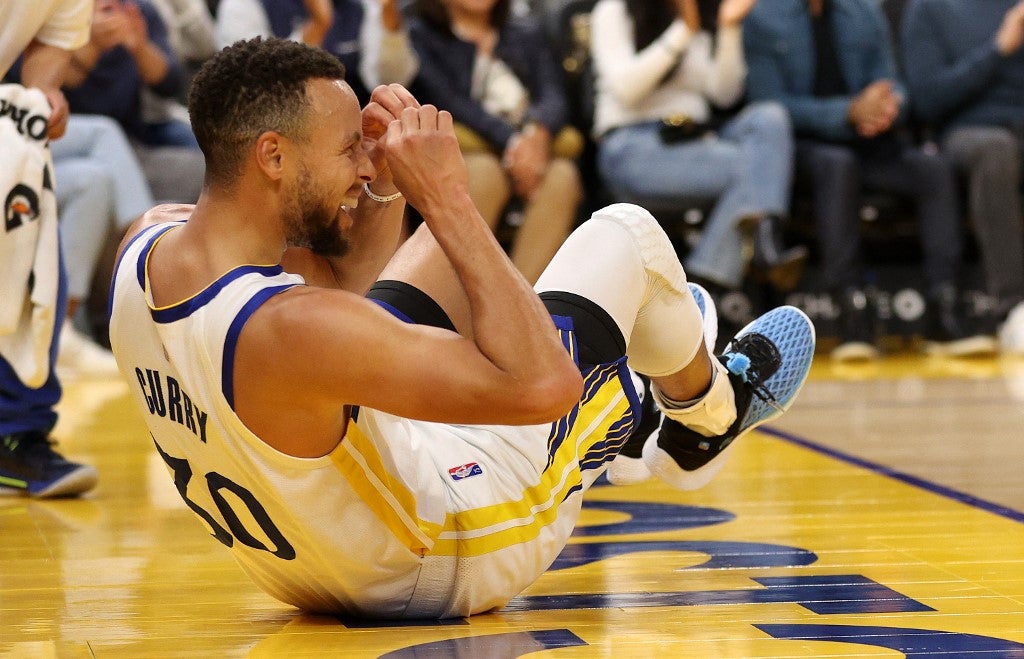 FILE – Stephen Curry #30 of the Golden State Warriors reacts after making a basket and getting fouled against the Memphis Grizzlies in the first half at Chase Center on October 28, 2021 in San Francisco, California. Ezra Shaw/Getty Images/AFP (Photo by EZRA SHAW / GETTY IMAGES NORTH AMERICA / Getty Images via AFP)

Stephen Curry rebounded from a lackluster first half with three 3-pointers in a two-minute flurry early in the third period Saturday night, sending the Golden State Warriors to a 103-82 demolition of the visiting Oklahoma City Thunder.

Curry finished with a game-high 20 points and Draymond Green chipped in with 14 as part of a double-double with a game-high 11 rebounds for the Warriors, who beat the Thunder for the second time in five days.

Shai Gilgeous-Alexander had a team-high 15 points for Oklahoma City, which was coming off a home win over the Los Angeles Lakers that came one night after a competitive 106-98 loss to Golden State on Tuesday.

With Curry scoring just five points, the Warriors led the rematch 55-44 at halftime and then just by nine after Oklahoma City’s Jeremiah Robinson-Earl opened the third period with a layup.

But Curry then nailed consecutive 3-pointers and, after Kevon Looney dropped in a layup, added a third long-range hoop to cap an 11-0 burst that opened a 20-point lead.

Wiggins and Jordan Poole totaled 14 points apiece and Otto Porter Jr. 10 for Golden State, which was coming off its first loss of the season on Thursday in an overtime affair against the Memphis Grizzlies.

The Warriors went 21-for-52 on 3-pointers, with Curry hitting six and Wiggins four in five tries. Golden State outscored Oklahoma City 63-24 from beyond the arc.

The one-sided fourth quarter featured the NBA debut of Golden State rookie Jonathan Kuminga, the No. 7 pick in the draft. After beginning the season on the sidelines due to a strained right patellar tendon, the 19-year-old contributed a 3-pointer and a steal in six minutes.

Lu Dort had 14 points and rookie Josh Giddey chipped in 10 to complement a team-high six assists for the Thunder, who were opening a three-game California swing.

Grizzlies take down Warriors again in OT in play-in rematch