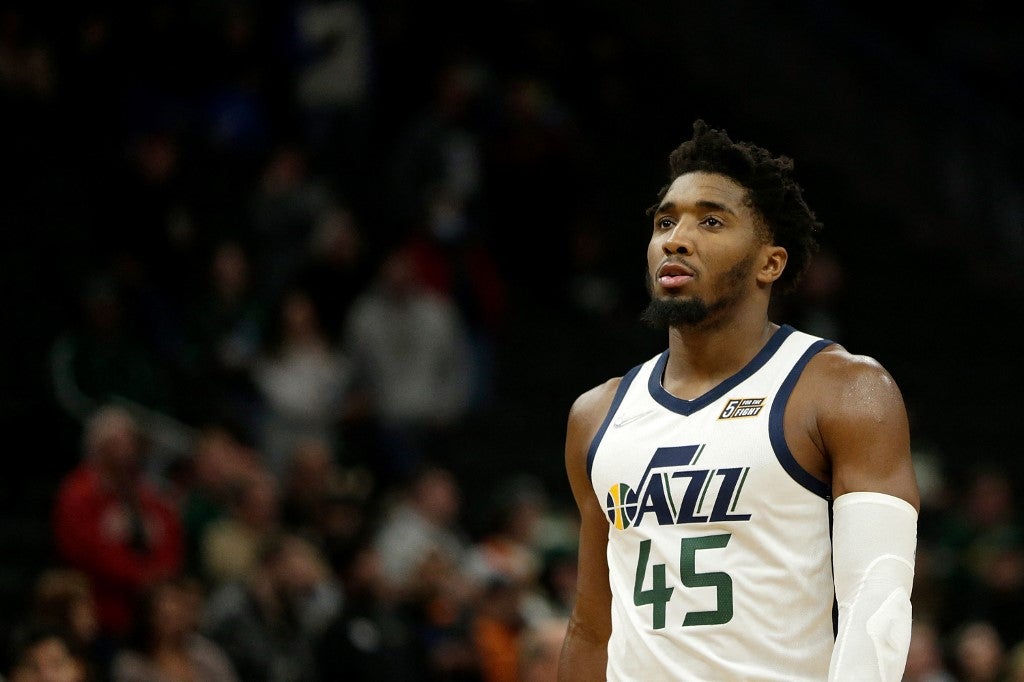 Donovan Mitchell #45 of the Utah Jazz looks up in the final seconds of the game against the Milwaukee Bucks at Fiserv Forum on October 31, 2021 in Milwaukee, Wisconsin. John Fisher/Getty Images/AFP (Photo by John Fisher / GETTY IMAGES NORTH AMERICA / Getty Images via AFP)

Donovan Mitchell scored 28, including 11 in the fourth quarter, and Mike Conley Jr. netted 20 points in his return to the lineup as the visiting Utah Jazz defeated the Milwaukee Bucks 107-95 on Sunday night.

Giannis Antetokounmpo led the Bucks with 25 points, seven rebounds and six assists, but Milwaukee still fell at home for the third time in its three-game homestand. Kris Middleton didn’t play because of a non-COVID-19 illness.

Utah led for most of the game — and never trailed — but the Bucks got within four points late in the fourth quarter after trailing by as many as 17. Grayson Allen’s hot hand played a big role in that rally, as the former Jazzman scored seven of his 18 points in the final minutes.

Jordan Clarkson, who had 15 points despite an 0-for-7 night from beyond the arc, put Utah up 84-67 late in the third quarter.

The Bucks chipped away at the lead to get within seven after two George Hill baskets made it 86-79 with eight minutes to go. A Bobby Portis Jr. jumpshot cut the deficit to five a minute and a half later.

That’s when Mitchell went to work, scoring seven points in just over two minutes as Utah pulled ahead 99-87 with just over three minutes remaining.

The @utahjazz move to 5-1! pic.twitter.com/SgqgJQvWVj

The Bucks weren’t quite finished, though.

Allen, the former Jazz player who replaced Giannis Antetokounmpo late in the game, sandwiched a pair of 3-pointers around a Thanasis Antetokounmpo dunk as Milwaukee clawed back to make it a four-point game, 99-95, with 1:39 remaining.

Mitchell padded the Jazz’s lead to six with an 8-foot shot, and Royce O’Neale made a huge defensive play by blocking an Allen 3-point attempt to all but end the Bucks’ comeback effort.

The victory was the fifth in six games for Utah, which suffered its first loss of the season in Chicago on Saturday night. The defending champion Bucks, meanwhile, dipped below .500 with a third-straight loss.