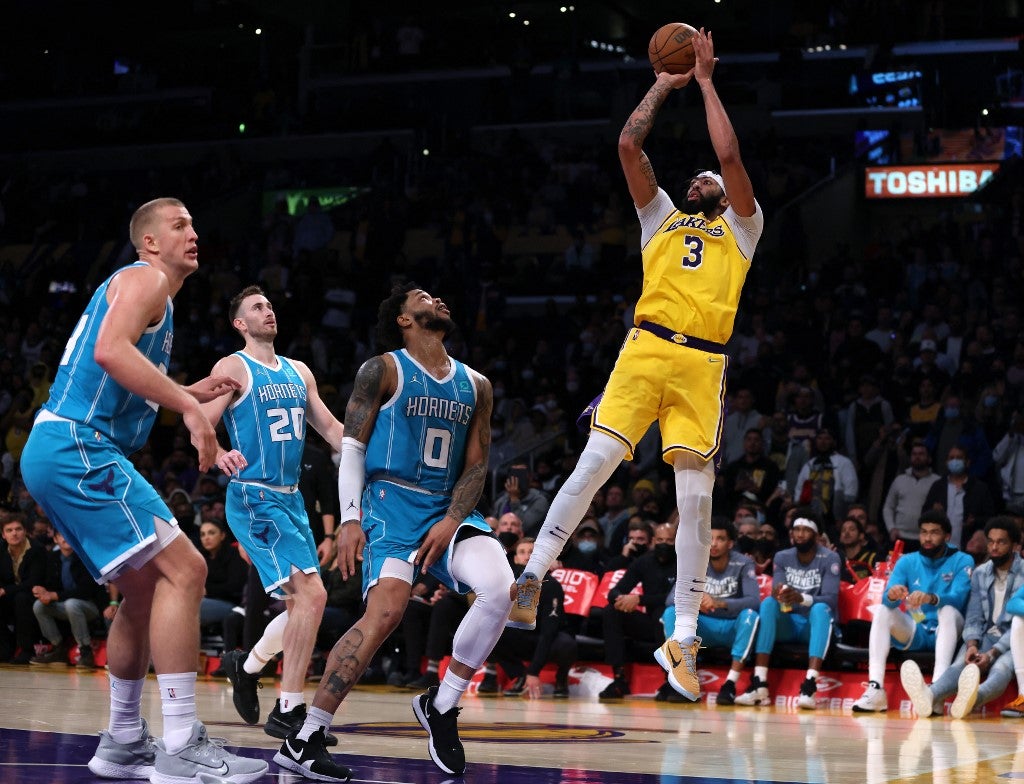 Anthony Davis #3 of the Los Angeles Lakers attempts a jumper in front of Mason Plumlee #24, Gordon Hayward #20 and Miles Bridges #0 of the Charlotte Hornets during a 126-123 Lakers overtime win at Staples Center on November 08, 2021 in Los Angeles, California. Harry How/Getty Images/AFP

Anthony Davis scored six of his 32 points in overtime and added 12 rebounds as the Los Angeles Lakers ended a two-game losing streak with a 126-123 overtime victory over the visiting Charlotte Hornets on Monday.

Carmelo Anthony had 29 points off the bench and Russell Westbrook had a triple-double with 17 points, 12 rebounds and 14 assists as the Lakers won for the first time in three tries since star LeBron James was lost for at least a week with an abdominal strain.

Terry Rozier scored 29 points for the Hornets and LaMelo Ball, a Los Angeles-area native, had his second career triple-double with 25 points, 15 rebounds and 11 assists.

Gordon Hayward had 21 points for the Hornets, who lost their fifth consecutive game. Charlotte went 0-4 on a California swing, including a 120-106 loss on Sunday against the Los Angeles Clippers.

Davis’ productive night came after he sprained his right thumb in a loss to the Oklahoma City Thunder on Thursday and left Saturday’s loss at the Portland Trail Blazers with a stomach ailment.

After the third quarter Monday, Davis retreated back to the locker room, where he said he vomited but returned and added a blocked shot on Rozier’s 3-pointer with 6.2 seconds remaining in overtime to help seal the victory.

Davis misfired on a 3-point attempt with 1.3 seconds left in regulation that could have won the game.

Bridges had 19 points for the Hornets, who still have one more game remaining on their road trip — at the Memphis Grizzlies. Mason Plumlee added 13 points and 10 rebounds for Charlotte.

The Lakers’ Rajon Rondo was ejected with 10:55 remaining for a flagrant foul on Rozier, swinging his arm straight down on the head of the Hornets guard from behind.

It was the second straight season the Hornets played consecutive games in Los Angeles against the Clippers and Lakers, and they went 0-4 in those games.