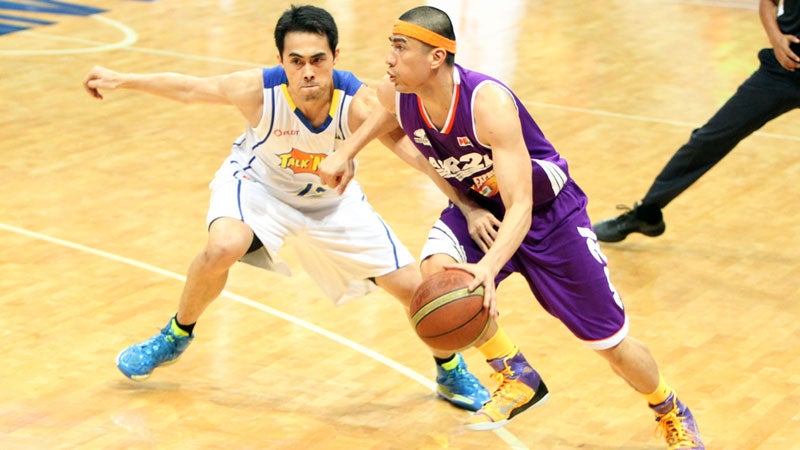 FILE––Mark Cardona of Air21 vs Larry Fonacier of Talk N Text during their old face offs in the PBA. PBA IMAGES

MANILA, Philippines–Aside from making his PBA comeback on the 3×3 stage, Mac Cardona is also looking forward to facing a familiar face in Larry Fonacier.

Cardona and Fonacier had countless battles with each other dating back to their collegiate days as stars for La Salle and Ateneo, respectively.

“He told me he’s happy to see when we saw each other earlier. We were batchmates in the PBA in 2005 and until now we’re still playing,” said Cardona, who plays for the Zamboanga Valientes, on Saturday during media day for the upcoming PBA 3×3 tournament.

Cardona and Fonacier played against each other twice in the UAAP Finals with the Green Archers winning the first encounter in 2001 and the Blue Eagles gaining redemption the following year.

Fonacier was named co-Finals MVP with Wesley Gonzales that season and it was also during Game 1 of the title series where the seven-time PBA champion will be best remembered for as a key member of Ateneo after he blocked Cardona’s two game-tying attempts as time ran out.

“I’m just happy to be playing against Larry. We were really competitive back then during our glory days with me at La Salle and even during the time when he was still with Alaska and now they’re going to witness that matchup again,” said Cardona, who finished his career at La Salle with two championships and a Finals MVP plum in 2004.

The 40-year-old Cardona, who last played in the PBA in 2017 when he suited up for GlobalPort, will be teaming up with Kyle Neypes, Gino Jumao-as and JR Cawaling.