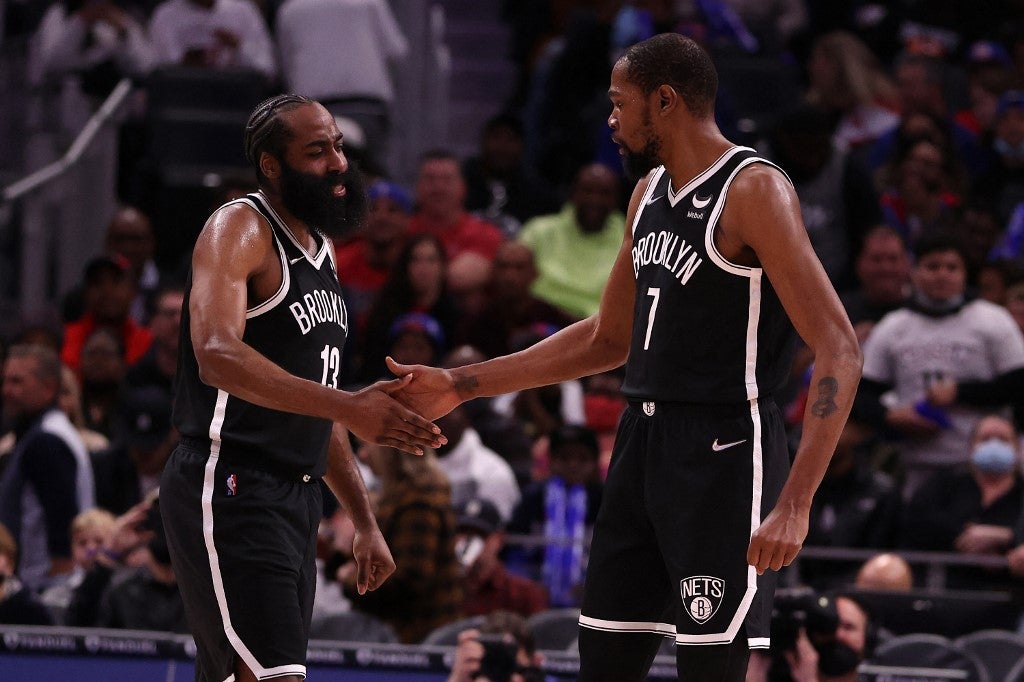 FILE – Kevin Durant #7 of the Brooklyn Nets celebrates a second half basket with James Harden #13 while playing the Detroit Pistons at Little Caesars Arena on November 05, 2021 in Detroit, Michigan. Brooklyn won the game 96-90. Gregory Shamus/Getty Images/AFP

When Kevin Durant and James Harden are both clicking offensively, it’s no secret that the Brooklyn Nets are hard to beat.

“Pray,” Harden said, jokingly, when asked what opposing defenses should do on such nights after the duo combined for 67 points and 20 assists in Friday’s win at New Orleans. “It’s difficult. We’re two unselfish basketball players. Obviously, Kevin is known for his scoring — efficient scoring — but he’s also a willing passer.

“We’ve just got to find ways to continue that ball movement and make sure that everybody’s involved on the court.”

Durant and Harden rose to stardom with the Thunder, playing together for three seasons before Harden was dealt to Houston before the 2012-2013 season.

Sunday’s game will be the first time they’ve returned together to play in Oklahoma City since they reunited with Harden’s trade from Houston to Brooklyn in January.

Harden had been slow rounding into form this season. Before Friday’s 39-point, 12-assist performance, he hadn’t scored more than 29 in a game this season.

“It’s always good for our team when we’re aggressive like that because we can create so much going to the paint,” Durant said.

The Nets have won back-to-back games and seven of their last eight after an up-and-down start to the season.

“You’re seeing us trying to put games together, and I think that’s the good part about it,” Durant said. “We’re figuring out what works for us on both ends. Now it’s on us to put it together for a full 48.”

Durant is averaging 29.4 points, his highest scoring average since 2013-14, when he won MVP honors with Oklahoma City.

The Thunder enter the game on a four-game winning streak after Friday’s 105-103 home victory over Sacramento.

Oklahoma City trailed by 18 late in the third quarter before rallying. In four of their five wins this season, the Thunder have trailed by at least 16 before coming back to win.

“It teaches the 48-minute lesson,” Oklahoma City coach Mark Daigneault said. “It brings a very tangible, emotional example of the length of the game and that you’re never quite out of it.”

Luguentz Dort has fueled the last two Thunder triumphs. Wednesday, Dort led the Thunder with 27 points, 10 above his previous best scoring output of the season in a 108-100 win in New Orleans.

Then Friday, after Dort scored on a tip-in to put Oklahoma City ahead in the closing minutes, the Kings tied the score and regained the ball with a chance to hold for the last shot. Yet, Dort poked away the ball from De’Aaron Fox as he tried to crossover Dort, and the Thunder guard streaked up the court for a tiebreaking layup with 1.7 seconds left to lift Oklahoma City to victory.

Dort has continued to enhance his reputation as one of the league’s strongest defenders, especially on the ball.

“He’s just a monster,” Daigneault said. “And we’ve got a bunch.”

Sunday’s meeting is the first of two between the teams this season.