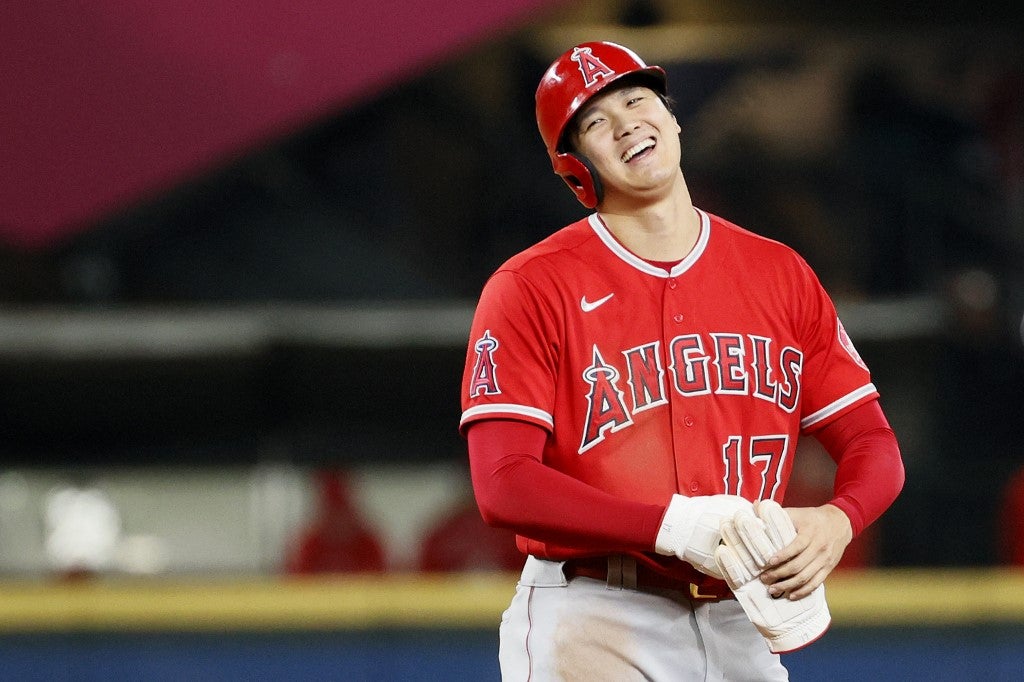 (FILES) In this file photo taken on October 2, 2021 Shohei Ohtani #17 of the Los Angeles Angels reacts as he stands on second base during the sixth inning against the Seattle Mariners at T-Mobile Park in Seattle, Washington. (Photo by Steph Chambers / GETTY IMAGES NORTH AMERICA / AFP)

Double-threat Shohei Ohtani of the Los Angeles Angels was named Most Valuable Player of Major League Baseball’s American League on Thursday, making him only the second Japanese player to win the award.

Ohtani, often compared to MLB great Babe Ruth because of his ability to pitch and hit at an elite level, was the unanimous pick over Toronto Blue Jays players Vladimir Guerrero Jr. and Marcus Semien in voting by the Baseball Writers’ Association of America.

“MVP is something I was shooting for, obviously, I think any player is as long as they’re playing baseball professionally,” said Ohtani via a translator. “But I was more appreciative of the fact that American fans – just the USA baseball – was more accepting and welcoming (of) the whole two-way idea compared to when I first started in Japan.

“I have always dealt with a lot of doubters, especially from my days in Japan but I try to not let that pressure get to me.

Shohei Ohtani is the only player in @MLB history to do what he did in 2021. pic.twitter.com/hkVwyueCYh

“This is my first time winning MVP so that is special alone but getting it unanimously makes it that much more special and helps me get more motivated to keep on putting up good numbers next season.”

The 27-year-old is the first Japanese player to win the award since Ichiro Suzuki earned the honours in 2001 as a member of the Seattle Mariners.

The Tokyo Tower will be illuminated in Los Angeles Angels colours on Friday to celebrate Ohtani’s accomplishment, MLB said in a statement.

“Growing up I watched Ichiro and he also won MVP and was someone I looked up to and got me actually wanting to play in the Big Leagues one day,” said Ohtani. “Hopefully I can be that type of figure to the kids watching me right now and hopefully one day I could play with one of those kids watching me. That would be really special.”

A mix of power and speed rarely seen on Major League diamonds, Ohtani’s 46 homers were just two off the MLB lead shared by Guerrero and Kansas City’s Salvador Perez.

On the mound he overwhelmed batters with a 100mph (160 kmph) fastball and was speedster on the base path stealing 26 bases.

The MVP was just the latest in a season packed with honours for Ohtani, also named the 16th recipient of the special Commissioner’s Historic Achievement Award.

The honour goes to a group or person who has made a major impact on baseball and is presented at the commissioner’s discretion.

“Shotime,” as Ohtani is known in the United States, was also named among the 100 most influential people of 2021 by the Time Magazine.

It’s been something special to witness what you’ve accomplished as a teammate. You have put together a season of your own…

“It’s been something special to witness what you’ve accomplished as a teammate. You have put together a season of your own… WELL DESERVED, #SHOTIME!!! #MVP,” tweeted Trout immediately after the announcement.

Philadelphia Phillies Bryce Harper took National League MVP honors, picking up the award for the second time. He also won the award in 2015 with the Washington Nationals.