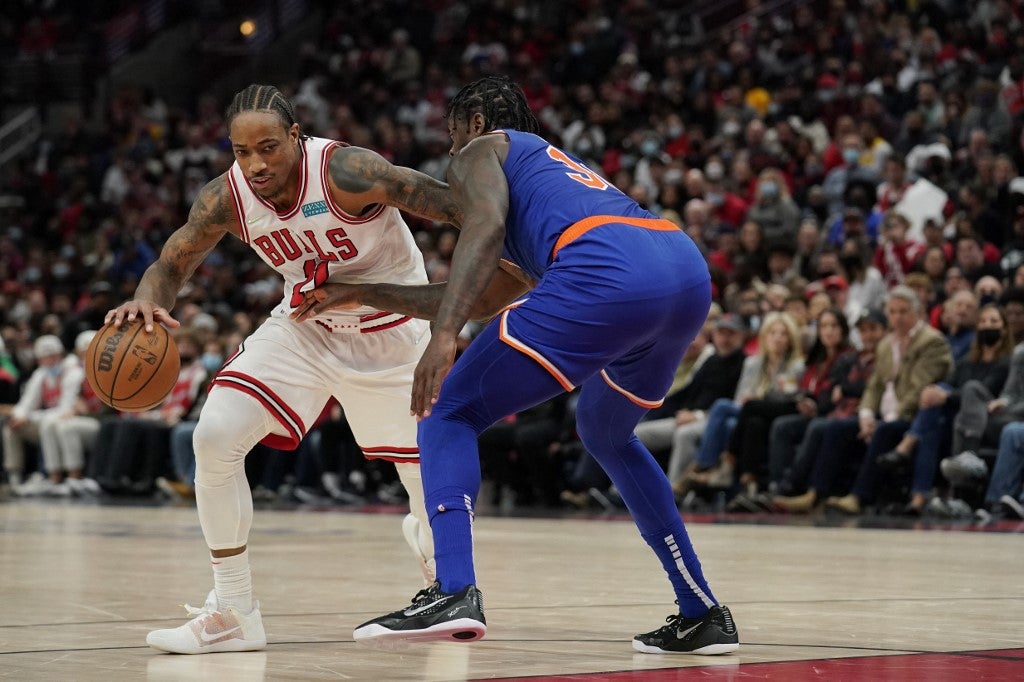 DeMar DeRozan #11 of the Chicago Bulls dribbles the ball against Julius Randle #30 of the New York Knicks in the second half at United Center on November 21, 2021 in Chicago, Illinois. Patrick McDermott/Getty Images/AFP

DeMar DeRozan scored 31 points and Zach LaVine followed with 21 as the host Chicago Bulls defeated the New York Knicks 109-103 on Sunday night, picking up their fourth win in five games.

DeMar does it again!@DeMar_DeRozan records his sixth 30-PT game of the season, putting up 31 in the @chicagobulls win 🙌 pic.twitter.com/cYWrsV60Jc

Javonte Green had nine rebounds for the Bulls.

Julius Randle recorded 34 points and 10 rebounds for the Knicks, who have lost two of three. Alec Burks (13 points), Immanuel Quickley (12) and Obi Toppin (10) followed in the scoring column, while RJ Barrett had nine points and 15 rebounds.

The Knicks outscored the Bulls 29-21 in the third quarter, but their 74-72 edge to begin the final period was short-lived. White and Derrick Jones Jr. drilled treys for Chicago in the first 1:06 of the fourth as the hosts grabbed a 78-74 lead, an advantage they didn’t relinquish.

Chicago shot 38.8 percent in the first half, compared to 35.1 percent for New York. The Bulls took a 51-45 lead into intermission behind 12 points from DeRozan and eight each from LaVine and Ball. Randle led all scorers at the break with 14 points. Derrick Rose followed with nine, while Barrett grabbed eight rebounds.

New York remained thin in the frontcourt, as Mitchell Robinson was assigned to concussion protocol after absorbing a shot to the face Saturday during a home victory against the Houston Rockets. Taj Gibson still is out with a groin strain.

Kemba Walker scored seven points in nearly 18 minutes for the Knicks, who have taken precaution in playing Walker in the second game of back-to-backs.

Nikola Vucevic (COVID-19 protocol) remains out for the Bulls.

The teams are set to conclude the season series with games Dec. 2 and March 28 at Madison Square Garden.