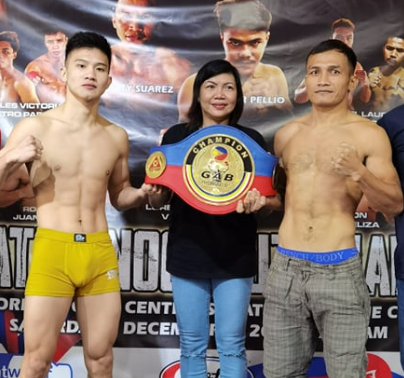 MANILA, Philippines—Unbeaten pugilist Carl Jammes Martin aims to take his first Philippine title in the super bantamweight division when he takes on champion Mark Anthony Geraldo in just the third 12-rounder of his career.

Martin, (17-0, 15 knockouts) will try to snatch away the Philippine Games and Amusements Board super bantamweight championship from Geraldo (38-9-3) on Saturday at The Flash Grand Ballroom inside Elorde Sports Complex in Parañaque.

Geraldo, 30, looks to be the toughest opponent yet for the 22-year-old Martin with the 14-year veteran the only man to beat IBF super flyweight champion Jerwin Ancajas.

“This could be the best and most difficult fight that I have because he’s already a veteran and the Philippine champion,” said Martin in Filipino.

Martin began his career in 2016, a time when Geraldo was already nine years into his own.

Though he never fought for a secondary title, Geraldo had fights against former World champions Nordine Oubaali and McJoe Arroyo while also squaring up against challengers Takuma Inoue and Arthur Villanueva.

Martin, meanwhile, sees a victory against Geraldo would boost his stock as he plans to venture into the regional title picture in 2022.