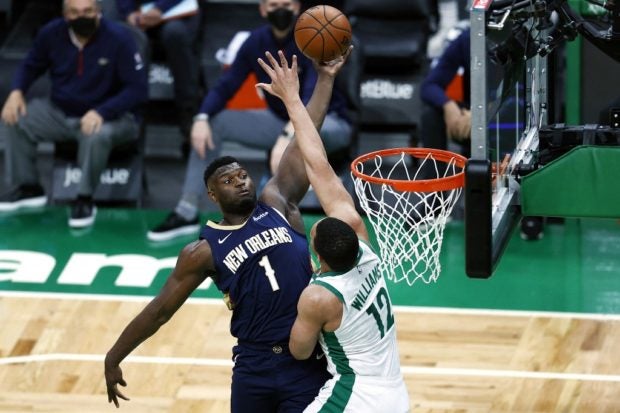 Zion Williamson of the New Orleans Pelicans takes a shot against Grant Williams of the Boston Celtics during the first quarter at TD Garden on March 29, 2021 in Boston, Massachusetts.  (Getty Images via AFP)

LOS ANGELES – Zion Williamson, the New Orleans Pelicans star whose NBA rise has been hampered by injury, has suffered another setback in his return from right foot surgery, the team said Saturday.

The 21-year-old had surgery in July and had been aiming for a return to the court in December.

But now it’s not clear when he might be back on an NBA court as his training is reduced “for an extended period.”

“After experiencing persistent soreness in his right foot, Zion Williamson underwent medical imaging which showed a regression in the bone healing of his fifth metatarsal,” the Pelicans said in a statement.

“As a result, the volume and intensity of his training will be reduced for an extended period to help allow for further bone healing.

“Additional updates will be provided as warranted,” the team said.

Pelicans coach Willie Green said last week that as Williamson had begun more intense on-court activities he had felt some soreness in his foot.

The team had hoped that a brief return to low-impact work would solve the problem for the third-year pro, who missed almost half of his rookie season with a knee injury.