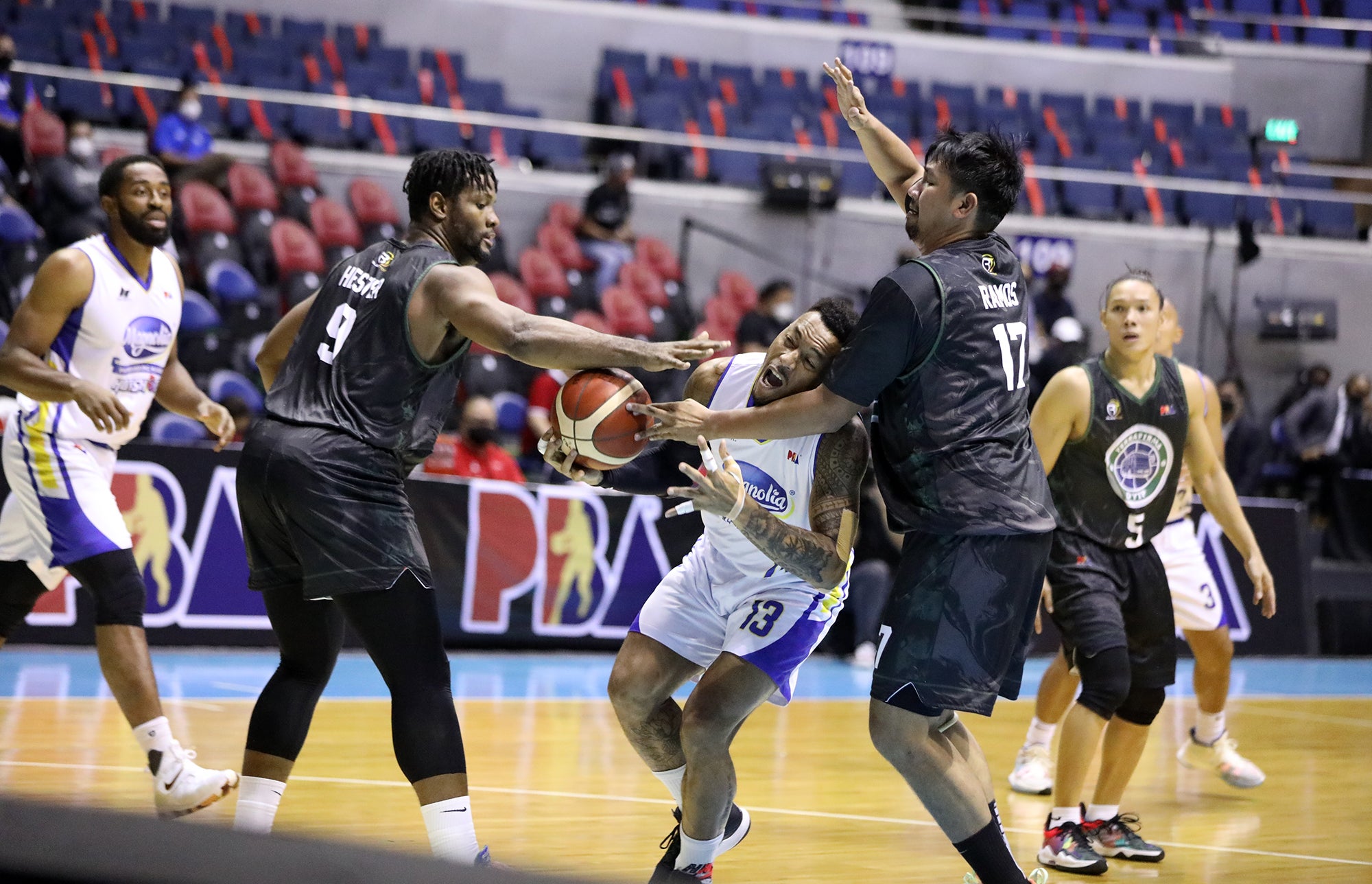 Calvin Abueva (No. 13) gave comebacking fans something to cheer about in Magnolia’s victory over Terrafirma. PBA IMAGES

The highlight play was greeted by something that hadn’t been heard in quite a while—spectators’ cheers.

Abueva went on to cap off his scintillating performance with 17 points and 11 rebounds in the Hotshots’ 114-87 blowout of Terrafirma, a result that drew another round of applause.

“That’s what the players miss the most,” Chito Victolero said. “We love playing for the fans, especially Calvin. He’s a jolly person and he really likes putting a show for the fans.”

The PBA finally welcomed spectators back to its games for the first time since the coronavirus pandemic upended its way of life in March of last year.

“I’m just so glad [the fans are back],” Abueva said after the game. “As I’ve said, the moment we took the court, we were overcome with excitement.”

“Even with just 20 percent [restriction] for the crowd, [at least] there are people watching us,” added the do-it-all forward, who led Magnolia’s locals in scoring.Paul Lee chipped in 16 points in a promising return to form, backstopping former Best Import winner Mike Harris’ double-double of 30 points and 15 rebounds.

Terrafirma, on the other hand, got the goods from Antonio Hester, who had 21 points in the Dyip’s second loss in three games. 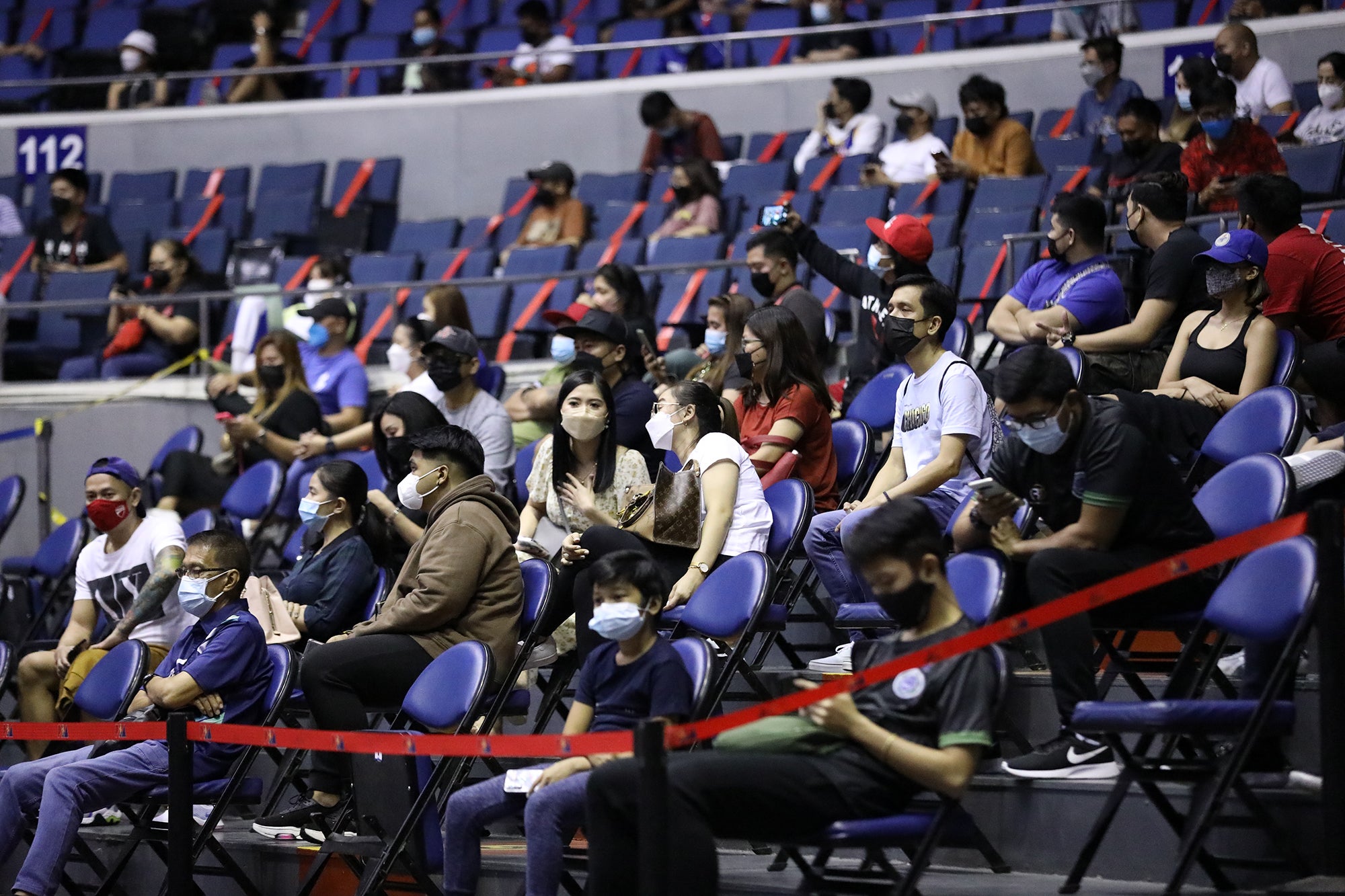 Fans nearly fill out the allowed seating areas at the Big Dome, a welcome surprise for the league that was expecting a much lower Wednesday turnout. —PHOTOS COURTESY OF PBA IMAGES

The significance of Magnolia greeting fans upon their return to the Big Dome was not lost on trivia hunters. The Hotshots were among the last to play in front of a crowd before the pandemic sent sports in limbo for six months. When the PBA finally crawled back to action, it held two tournaments in bio-secure environments, devoid of spectators.

The PBA could’ve opted to bring in more than those who showed up at the Big Dome for Wednesday’s doubleheader.

But it decided to start slow for easier crowd management.

The Big Dome, the league’s perennial venue, had also set a cap of 3,000 to 4,000 individuals for the tournament, way below the allowed 50 percent threshold set by the national pandemic task force for alert level 2 areas.

Patrons who watched the game had to show proof of vaccination and a government identification card. They were also made to wear a mask at all times. Distanced seating was employed within the venue.

These protocols will likely govern spectators for the meantime.

“You can now hear cheers and jeers from fans,” said PBA commissioner Willie Marcial. “This is a product of all of our hard work. We’re making a lot of people happy.”

As limited as the capacity was, a total of 1,480 seats were occupied, much to the delight of the league.

“I was even goofing around with my staff [earlier in the day], telling them to just prepare a few hotdogs,” Marcial said. “It’s a Wednesday, after all, and many people are still scared to go out and about. But several seats were occupied. It’s really heartwarming to see the people’s reception.”