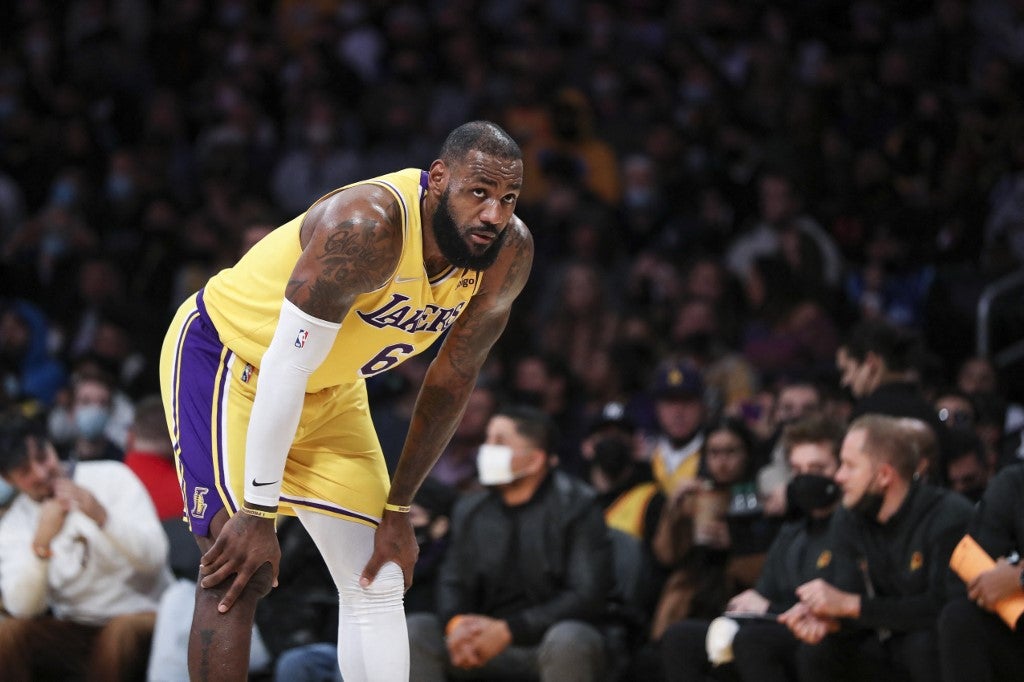 LeBron James #6 of the Los Angeles Lakers reacts during the game against the Phoenix Suns at Staples Center on December 21, 2021 in Los Angeles, California. Meg Oliphant/Getty Images /AFP

LeBron James’ latest foray into the NBA’s Christmas Day showcase will not be the star-studded affair the league anticipated when the schedule came out in the middle of August.

James will appear in his 16th Christmas Day game Saturday when his struggling Los Angeles Lakers host the Brooklyn Nets, who will welcome back James Harden but will be without Kevin Durant and remain significantly short-handed due to the league’s COVID-19 health and safety protocols.

“It’s a game that both teams want to win, no matter what circumstances,” James said. “Is it going to be one of the premier games that I’m accustomed to playing on Christmas Day? No. So many guys out. You know this whole protocol thing has gotten a lot worse for a lot of the teams in the league right now.”

James will tie Kobe Bryant for the most Christmas Day appearances. James (383) also needs 13 points to pass the late Lakers’ legend for the most points in the showcase.

But this version of the Lakers is struggling to find its footing, especially since Anthony Davis suffered a sprained MCL on December 17. Davis is out until mid-January, and since then Avery Bradley, Kent Bazemore, Malik Monk, Austin Reaves and Trevor Ariza — along with coach Frank Vogel — have entered the health and safety protocols.

Los Angeles is on a season-worst four-game skid although James has scored at least 30 points in three straight games. He scored 36 points Thursday, but it occurred in an ugly 138-110 home loss to the San Antonio Spurs when the Lakers allowed their second-most points of the season and a season-worst 18 3-pointers.

“We have no chemistry with any lineup from the simple fact that we haven’t logged any minutes,” James said. “All of our defensive guys are in health and safety protocols. We don’t need a full roster. We just need some of our guys back.”

By all indications, the Lakers are not getting any players back from the health and safety protocols. They will get reinforcements in the form of Darren Collison and Stanley Johnson, who inked 10-day contracts Friday.

The Nets will play for the first time since a 100-93 home loss to the Orlando Magic on December 18. Since then they saw games against the Denver Nuggets, Washington Wizards and Portland Trail Blazers postponed due to so much of their roster entering the health and safety protocols.

When the Nets last took the floor, they were without nine players, including Kyrie Irving, who is only eligible to play in road games due to his vaccination status.

Harden missed three games but was cleared Thursday, along with Paul Millsap and Jevon Carter. De’Andre Bembry was cleared Friday.

Durant will miss his second straight game after entering the protocol and fourth overall due to a since-healed ankle injury. The Nets also will be without veterans Bruce Brown, James Johnson and LaMarcus Aldridge along with rookies Day’Ron Sharpe, Cam Thomas, David Duke Jr. and Kessler Edwards, who filled in admirably last week.

“We just do the best we can,” Brooklyn coach Steve Nash said Friday. “We got a lot of guys coming off an extended break. Nobody’s in great condition so we have to manage the group, try to be as competitive as possible and at the same time, be careful.

“Guys coming out and playing a game after an absence like this is tricky. We’ll do what we can. A lot of these decisions are still to be made before the game, during the game, as the game goes on, so we just have to be very fluid, adaptable and take it as a great opportunity.”