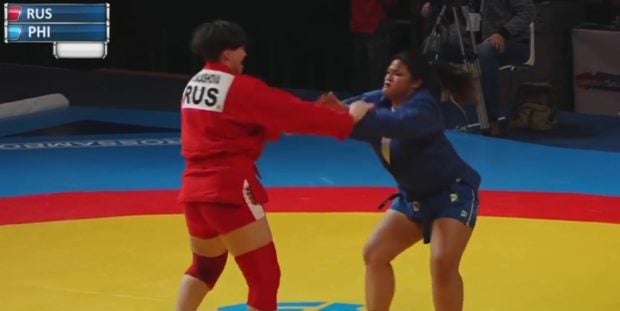 Sydney Sy noticed a palpable change among her competitors during the recent World Sambo Championships in Tashkent, Uzbekistan.

“In my weight category, they had all become 40 to 50 kilograms heavier,” Sy said.

“When we got full recognition in the [Tokyo] Olympics, a large number of judokas moved over to sambo,’’ said Tancontian, himself a former multiple medalist national judoka. “You can just imagine how big the participants were in the recent world championships. Sydney lost in the first round against a 135-kg entry from Kazakhstan.’’

The influx of new and bigger opponents has forced Sy to set her sights on a lower, more limited weight class.

“It’s going to be very challenging,” she said. “My opponents in the lower categories are much faster, I have to keep up with them and maintain my power and stamina at the same time.”

That’s exactly what her training in France hopes to accomplish. The 2018 World Sambo Championships bronze medalist has set up camp in the European country with the help of the Philippine Sports Commission, in the hopes of mapping out a scientific plan of action that will allow Sy to keep her strengths despite her weight cut.

Sambo is stylistically similar to old-time judo, and in a lot of ways is influenced by the latter, but with some differences in rules, protocol and uniform.

Sambo wrestling allows various types of leg locks just like judo. It prohibits chokeholds and focuses on throwing, groundwork and submissions with very few limitations on holds and gripping.

With need to spar, Sy trains in Paris