John Riel Casimero had just completed training for a title defense before pulling out on the eve of the weigh-in due to gastritis. —photo from PROBELLUM

Any plans to unify the world bantamweight title belts will still have to go through John Riel Casimero—for now.

The World Boxing Organization (WBO) said it would retain the Filipino firebrand as its 118-pound champion after Casimero complied with the sanctioning body’s show cause order regarding his controversial pullout from a title defense against Paul Butler that was supposed to take place last Dec. 11 in Dubai.

“We believe the submitted evidence suffices for a justified cause, and therefore, Casimero retains the WBO Champion status,” wrote the WBO in a resolution posted on the organization’s website last Dec. 23, one that championship committee chair Luis Batista Salas signed.

The WBO decision means Casimero will continue to be the third man in the mix of boxers looking to unify the bantamweight crown. The other two fighters are Japanese star Naoya Inoue, who holds the World Boxing Association and International Boxing Federation belts, and Nonito Donaire Jr., the Filipino star who owns the division’s World Boxing Council strap.

In the four-belt era, no boxer has yet unified the bantamweight crowns, something that Donaire said he was looking forward to accomplishing.

“Unified! That’s what we’re looking for,” said the 39-year-old Donaire after beating Filipino Reymart Gaballo early this month via knockout. “That’s what we’re going for, [to become the] unified champion of the world.”

Donaire was looking to forge a showdown with Inoue, who he previously lost to in a fight-of-the-year showdown in November 2019, that would make either man a three-belt champion and a step closer to unification. 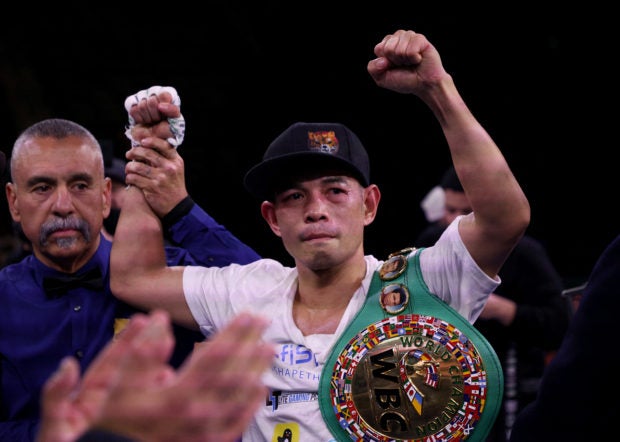 “Me and Naoya have much respect for each other, I believe Richard [Schaefer of Probellum Promotions] is gonna make it happen,” said Donaire.

As things stand, though, the brash-talking Casimero will still have a say in the battle for a unified champion.

Donaire and Casimero could have turned the battle for a single bantamweight king into a two-fighter battle, had they mixed it up in a proposed showdown slated last April. But Donaire pulled the plug on that fight over Casimero’s refusal to submit himself to rigorous drug-testing protocols. Casimero also insulted Donaire’s wife, Rachel.

Casimero was scheduled to defend his WBO belt against mandatory challenger Butler, but on the eve of the weigh-in, the Filipino was allegedly admitted to the American Hospital Dubai at 2 a.m. (United Arab Emirates time) due to viral gastritis.

That forced him to bolt the fight at Dubai’s Coca-Cola Arena. There were rumors that Casimero used the hospital as a fire exit over his inability to make weight, which would have had him stripped of his belt.

But the WBO resolution quashed all that talk.

“There is no controversy as to the cause of Casimero’s physical impediment to engaging in the WBO Bantamweight Mandatory Championship Bout against Paul Butler per the medical documents furnished to the WBO,” the organization wrote.

“In essence, all the supportive evidence concluded that Casimero’s diagnosis was Viral Gastritis. Furthermore, these findings were rendered by duly licensed physicians and certified by the respective medical institutions. Therefore, we deem it unnecessary to challenge these findings through independent medical review.”

The WBO, however, could still strip the 32-year-old Casimero of his title if he pushes through with a planned exhibition bout against YouTube personality Jormiel Labador Fitness on Dec. 28.