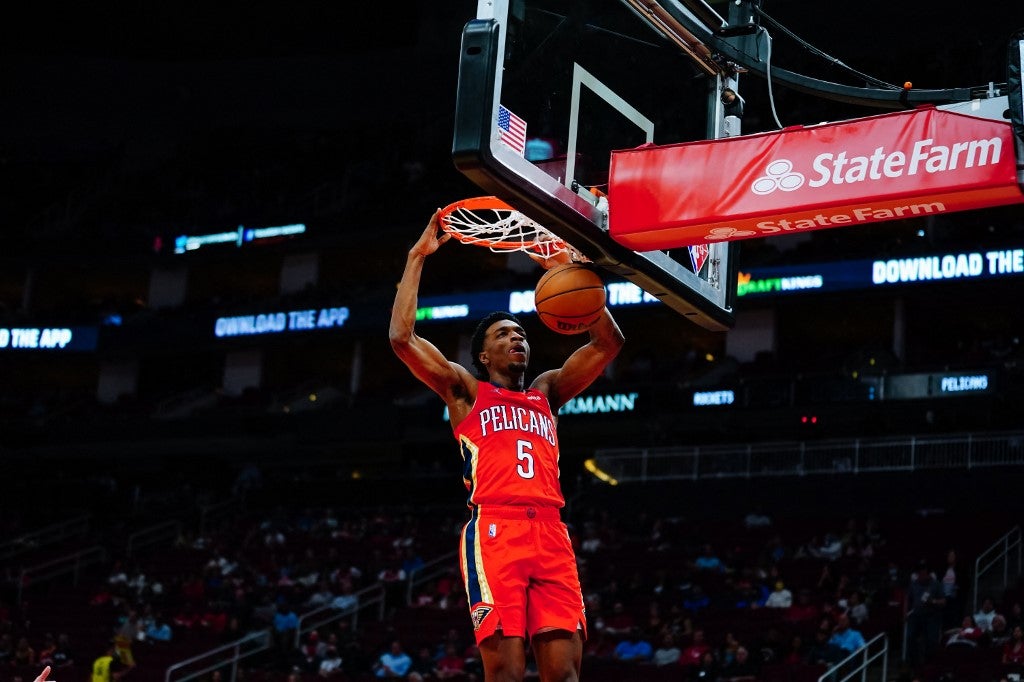 FILE–Herbert Jones #5 of the New Orleans Pelicans dunks the ball during the game against the Houston Rockets at Toyota Center on December 5, 2021 in Houston, Texas. Alex Bierens de Haan/Getty Images/AFP

Herbert Jones scored a season-high 26 points and Garrett Temple scored all 17 of his points in the fourth quarter as the host New Orleans Pelicans rallied to defeat the Cleveland Cavaliers 108-104 Tuesday night.

Devonte’ Graham scored 18 points, Jonas Valanciunas returned from a two-game absence due to a non-COVID illness to get 15 points and 10 rebounds, and Gary Clark added 12 points for the Pelicans. New Orleans won for the fifth time in six games despite trailing by as many as 23 points late in the first quarter.

Markkanen scored the first four points of the fourth quarter, and a 3-pointer by Love pushed Cleveland’s lead to 90-78.

Mobley made two free throws, but Temple answered with two more 3-pointers to give the Pelicans their first lead at 99-97 with 3:18 left.

Graham added a 3-pointer to push the lead to five points with 1:30 left.

Isaac Okoro made one of two free throws and Love hit another 3-pointer to end a 7 1/2-minute field goal drought for the Cavaliers and get them within 102-101 with 46 seconds left.

Love made a 3-pointer with 1.5 seconds left before Graham hit two free throws.

Saving the best for the last quarter 🔥@GTemp17 scores all 17 of his points in the fourth to help the @PelicansNBA complete the 23-PT comeback and take the win! pic.twitter.com/jQrtKTMjvR

The Cavaliers scored the first four points of the third quarter to take a 14-point lead.

Graham scored nine points to help the Pelicans pull within 83-76 at the end of the third quarter. They outscored Cleveland 32-21 in the fourth quarter.

Both teams played without their leading scorers.

Pelicans forward Brandon Ingram was sidelined by Achilles soreness that knocked him out of a 117-112 loss at Oklahoma City on Sunday.