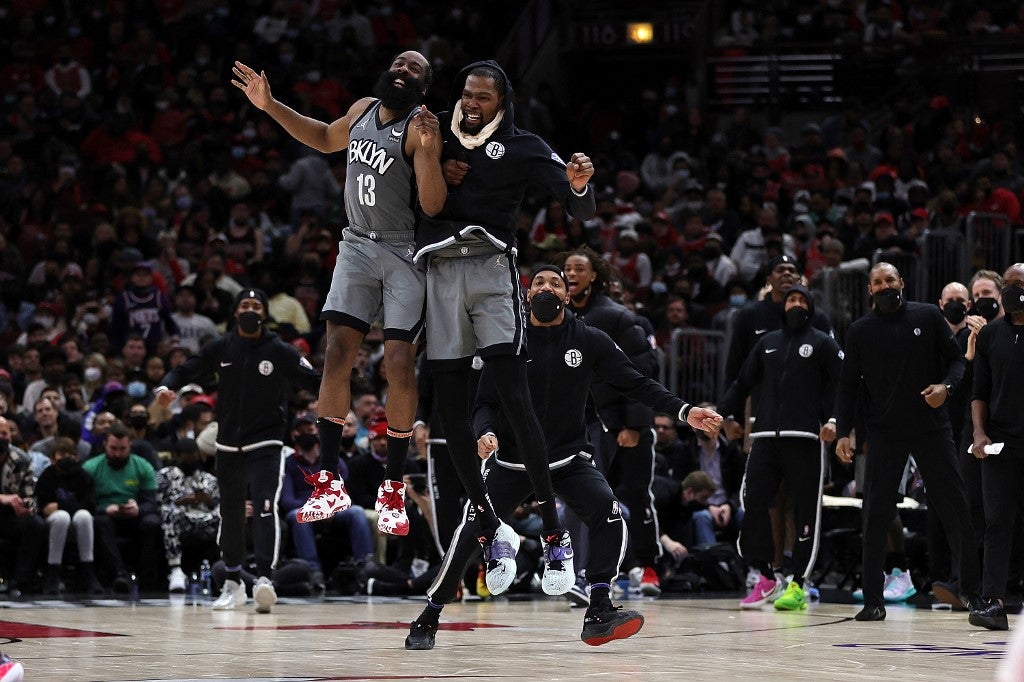 James Harden #13 and Kevin Durant #7 of the Brooklyn Nets celebrate after a score during the second half of a game against the Chicago Bulls at United Center on January 12, 2022 in Chicago, Illinois. Stacy Revere/Getty Images/AFP

Kevin Durant scored a game-high 27 points and James Harden notched 25 points and 16 assists to lift the visiting Brooklyn Nets to a 138-112 rout of the Chicago Bulls on Wednesday in a matchup of the top two teams in the Eastern Conference.

A 22-0 run spanning the third and fourth quarters shifted the advantage to Brooklyn, which avenged a 23-point defeat in Chicago on Nov. 8 and a four-point home loss to the Bulls on Dec. 4.

The torrid third quarter established the tone on a night when the Nets led by as many as 38. Brooklyn shot 12-for-18 and committed just one turnover in the third while closing the quarter on a 30-8 run after a Nikola Vucevic layup tied the game at 71 at the 8:43 mark.

Seeking their first regular-season sweep of the Nets since 1997-98, the Bulls still claimed their first season series against Brooklyn in five years.

Brooklyn finished at 56.3 percent from the floor, including 17-for-32 accuracy from long range. Chicago shot 46.9 percent.

Sharpe and Harden snagged seven rebounds apiece to help the Nets win the battle along the boards 41-35. Lonzo Ball had seven assists for Chicago, which lost for the second time in 12 games.

Chicago’s Derrick Jones Jr. left the game after just 36 seconds with a right knee injury. Jones appeared to land awkwardly while jumping for the ball and was helped to the locker room by team training staff.

Nic Claxton missed the game for Brooklyn because of left hamstring tightness.