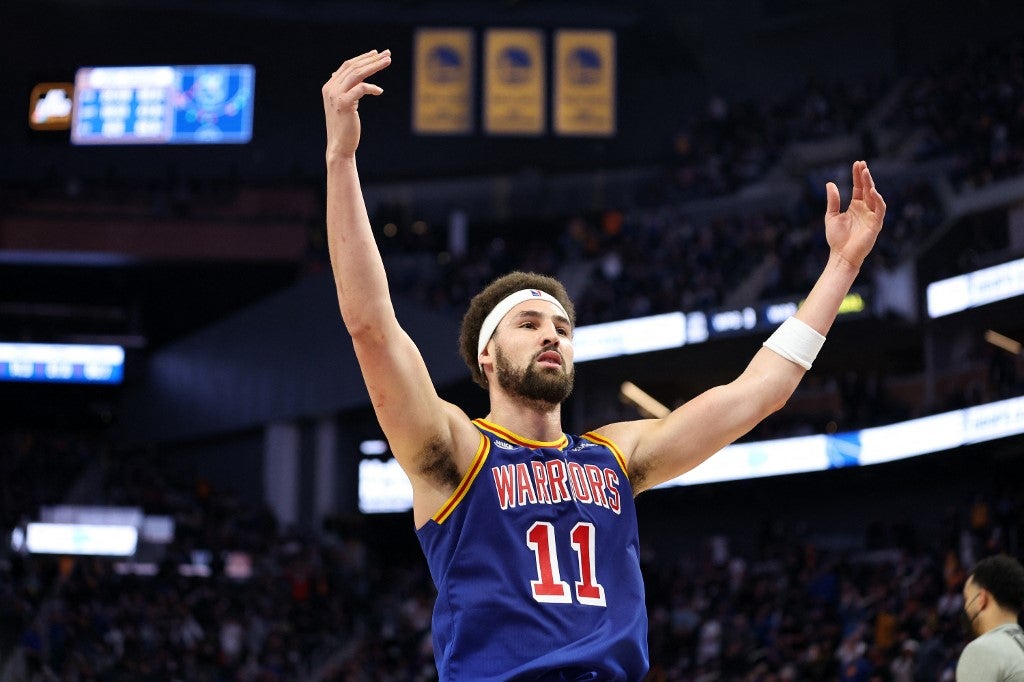 Klay Thompson #11 of the Golden State Warriors reacts at the end of the first half of their game against the Detroit Pistons at Chase Center on January 18, 2022 in San Francisco, California. Ezra Shaw/Getty Images/AFP

Klay Thompson had the best performance of his five-game-old season Tuesday night, hitting three 3-pointers among a game-high 21 points as the Golden State Warriors opened a seven-game homestand with a 102-86 romp over the Detroit Pistons in San Francisco.

Andrew Wiggins chipped in with 19 points and Stephen Curry had 18. Thompson, still early in his comeback from ACL and Achilles injuries, played 22 minutes.

Rodney McGruder, playing for the first time since his trade to the Denver Nuggets was voided, paced the Pistons with a season-high 19 points off the bench.

Coming off a 1-3 trip, the Warriors wasted little time getting back in the swing of things, getting nine points from Wiggins, six from Curry and five from Thompson in a game-opening, 26-13 flurry.

The advantage mushroomed to 66-38 by halftime and maxed out at 73-39 in the fourth minute of the third quarter before the Warriors coasted to their third consecutive home win.

Leading the way in the @warriors win, Klay Thompson went off for 17 PTS in the first half on his way to a season-high 21 PTS! 💧 pic.twitter.com/EBufdpSX2e

Thompson, who had shot just 35.7 percent both overall and on 3-point attempts while averaging 13.8 points in his first four games, went 6-for-13 from the field and 3-for-8 from long distance.

He also made all six of his free throws, making him 11-for-11 at the line for the season.

Curry, who also found time for a game-high eight assists and three steals, added four 3-pointers and Wiggins had three for the Warriors, who outscored the Pistons 42-27 from beyond the arc.

Golden State rookie Jonathan Kuminga responded to his third start of the season with his first double-double, grabbing a season-best 10 rebounds to complement 12 points.

Kevon Looney also had 10 rebounds for the Warriors, who outrebounded the guests 54-50.

McGruder, who had been inactive for Detroit’s previous three games, scored 11 more points than he’d recorded in any game this season. He sank four of the Pistons’ nine 3-pointers.

Hamidou Diallo added 16 points, Isaiah Stewart 14, Trey Lyles 13 and Saddiq Bey 10 for the Pistons, who had won three of their previous five games.

Rookie Cade Cunningham shot just 3-for-10 and was limited to eight points for Detroit, which was opening a four-game Western swing that continues Wednesday night in Sacramento.

Diallo and Stewart both logged double-doubles, Diallo with a game-high 13 rebounds and Stewart with 11 boards.