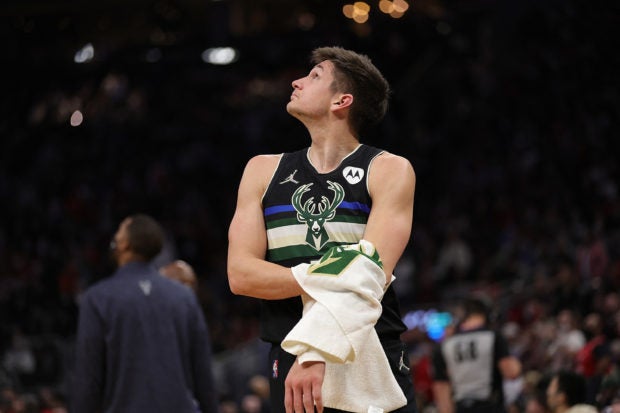 Grayson Allen of the Milwaukee Bucks looks to the scoreboard before being ejected for a hard foul against Alex Caruso #6 of the Chicago Bulls during the second half of a game at Fiserv Forum on January 21, 2022 in Milwaukee, Wisconsin.  (Getty Images via AFP)

LOS ANGELES – Milwaukee Bucks guard Grayson Allen has been suspended for one game for breaking the wrist of Alex Caruso of the Chicago Bulls in Friday night’s NBA game in Milwaukee.

The league’s disciplinary officials decided to suspend Allen after he was slapped with a flagrant two foul call by officials during the third quarter of the Bucks 94-90 win. Allen was ejected after the penalty call.

Caruso went up for a layup on a fast break with 5:45 remaining in the third, — and, while he was in mid-air — Allen grabbed his arms and spun him around, sending the Bulls guard crashing to the floor where he landed on his right wrist.

Caruso will miss six to eight weeks with the fracture.

“Dude just grabbed me out of the air,” Caruso said. “I don’t know what else you can do about it. I’m just glad that I didn’t have any major scary injuries right away.”