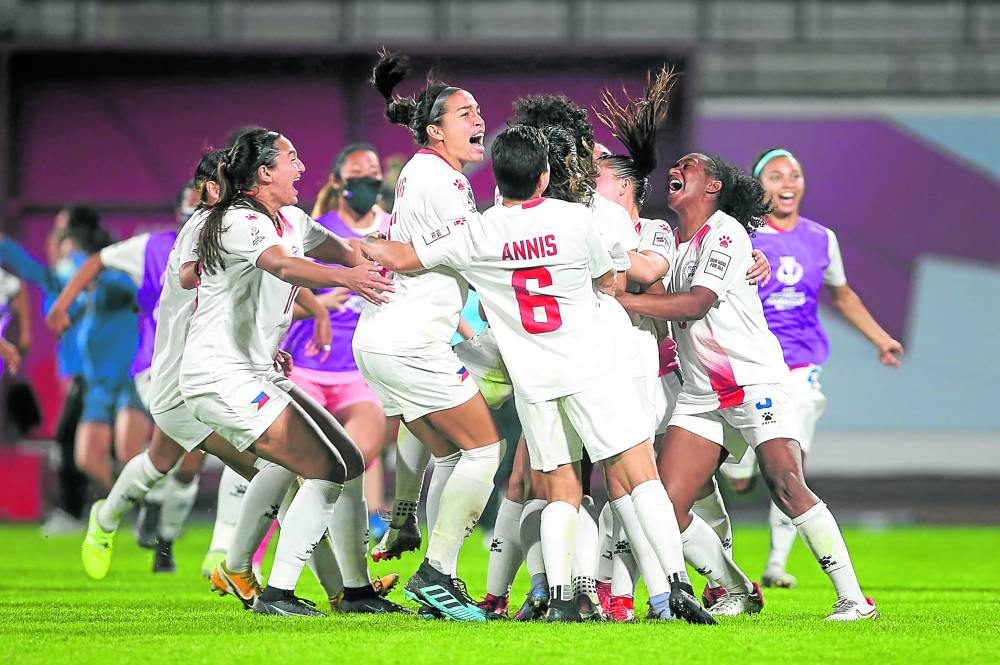 The jubilant Filipinos erupt in wild celebration after a 4-3 win in the penalty shootout against the Taiwanese.

MANILA, Philippines–History, an opponent ranked 25 places higher and expectations that the team was willing to settle for what it had already achieved. There were so many things going against the Philippines women’s team on Sunday night.

Fortunately, this was a team—a race, too, actually—built to fight through anything.

“We do not stop fighting,” said goalkeeper Olivia McDaniel, who would embody that grit in a quarterfinal showdown with Chinese Taipei. “There was just a sense of we have to do this. There was no way we’re not going to win the game. It wasn’t pressure, just a sense of pride for the whole team.”

“Filipinos, our resilience is legendary,” said forward Sarina Bolden during a Zoom press conference on Monday. “No matter what, you’ll see Filipinos working so hard and putting their heart, their souls into everything that we do.”

And so Bolden walked toward the ball for her penalty kick as a tense atmosphere thickened the air at Shiv Chhatrapati Sports Complex in Pune, India. From somewhere behind her, a voice shot out. “All yours, Sarina. All yours!” Inside her head, another voice. “Pick a spot and commit to it.”

Tied with former powerhouse Chinese Taipei after full-time at 1-1 and at 3-3 after 11 penalty kicks, a handful of key saves and one miss that the stout-hearted McDaniel credited to divine intervention, Bolden had a chance to send the Philippines to where it had never been before.

“I just wanted to finish it,” she said.

That she did, delivering a shot beyond the reach of Taiwanese goalkeeper Cheng Su-Yu for the winning goal that sent the Philippines to the women’s World Cup. This was the first Filipino football team—men or women—to make it to the sport’s grandest stage.

While Bolden provided the winning goal, it was McDaniel who was all over the heart-stopping finale.

After conceding three penalties, including one where she guessed right and “dove correctly but just couldn’t get there,” the 24-year-old keeper caught a key break with the Philippines trailing, 3-2.

Hsu Yi-Yun had McDaniel outfoxed—and the Taiwanese at the cusp of victory—but her shot found the left pole, and reeled the Philippines back into the match.

“The one off the post, the first one that Chinese Taipei unfortunately missed—fortunately for us—I thought, ‘wow, that was Jesus,’” McDaniel said, laughing. “So I thought, let me carry it my way next and I’ll get the next two.”

Pouncing on a weak decision by Su Sin-Hsin, Chinese Taipei’s final attempt, McDaniel kept the Philippines within a goal of sending the penalties into sudden death.

The Filipinos still needed a tying kick, and it was McDaniel who coolly banged one home through the lower left corner.

“There was no doubt in my mind that she was going to make that,” Bolden said.

With the game tied, McDaniel again played hero, jumping on a poor attempt by Zhuo Li-Ping, who tied the game at full time, to set the stage for Bolden.

And now, the team is in the World Cup, which will be hosted by New Zealand and Australia next year.

“I don’t known if it will feel real anytime soon,” Bolden said. “Just being women and setting that bar and showing other Filipino girls that hey, we can make it to the World Cup. If that’s your dream, look at us. Fight for your dream, fight for what you love.” Olivia McDaniel seals the deal for the Filipinos with this brilliant save. —PHOTOS FROM AFC

That’s exactly what this team did. Fight. And although it accomplished something for the country, in some way, the win over Chinese Taipei was also a fulfillment of the players’ personal dreams.

“I started dreaming of playing [in the World Cup] ever since I saw the [US women’s national team in the 1999 World Cup] in their penalty shootout with China and seeing Brandi Chastain rip her shirt off after they won,” McDaniel said.

“That was just everything I wanted,” added McDaniel, who watched the game belatedly on YouTube when she was “8 or 9.”

Quinley Quezada scored in the 49th minute to give the Philippines a 1-0 lead, but Zhou silenced the Filipinos with an agonizing equalizer. A right-footed player, Zhou fired a left-footed long shot that looked wide, only to curl its way home via the top corner in the 83rd minute.

With no one scoring in extra time, the game went to a shootout.

Ting Chi and Wang Hsiang-Huei alternated with Sara Castañeda and Tahnai Annis for a 2-2 tie.

“Before I made the two saves, I was getting a bit frustrated. But I thought ‘it will come, it will come; just be patient.’ You can’t get frustrated with yourself. It’s a hard task for someone to go in there and stop a point blank shot,” McDaniel said.

🎥 From the bench down to celebrations on the field, witness the raw emotion the very moment the #PWNT made history as captured by our very own @camillewilson95.

Then, trouble for the Philippines as Chen Ying-Hui scored, but Jessica Miclat missed. As Miclat walked back to the team, Bolden gestured to her to keep her chin up.

Then came Hsu’s miss, followed by the dramatic sequence of events that wound up making history.

“It’s an unbelievable achievement by the group, and a moment in history for the country, you won’t be able to take that away from the group,” said Philippines head coach Alen Stajcic, who spearheaded the rise of the squad.

“The coaching staff really did a great job,” said Cedelf Tupas, the former Inquirer football beat reporter who is now the national team’s media officer. “There was new talent yes, but they still needed to get turn the team into a cohesive unit and they only had three challenging months to do it.”

The Philippines now heads into a semifinal showdown with Asian heavyweight Korea, which upset Australia in their semifinal duel, 1-0.