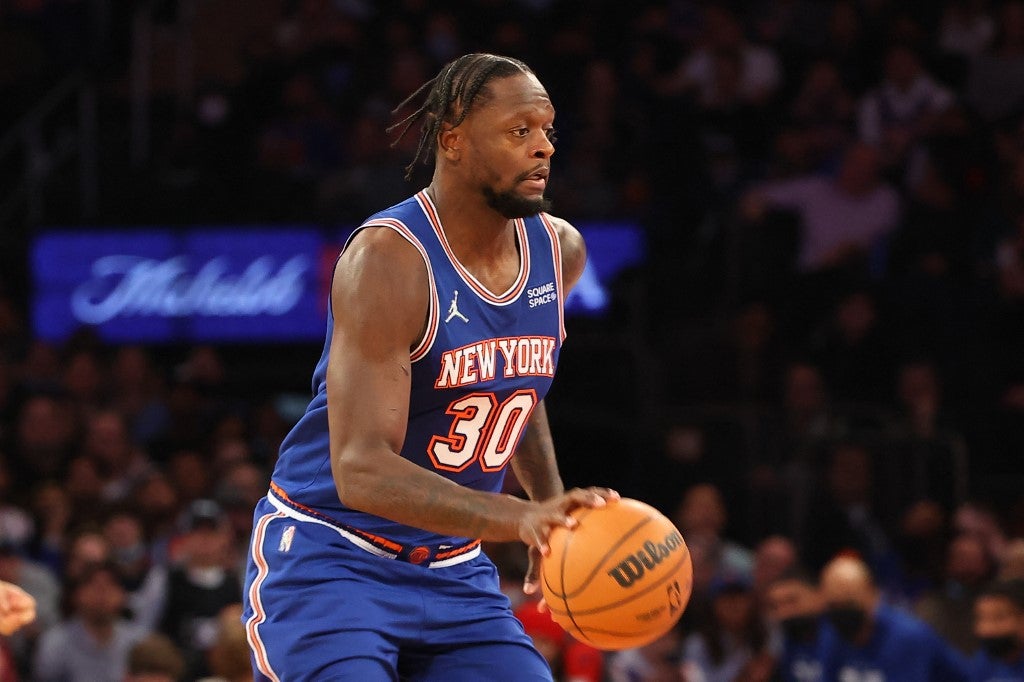 Julius Randle #30 of the New York Knicks dribbles up court during the first quarter against the Memphis Grizzlies on February 2, 2022 at Madison Square Garden in New York City. Rich Graessle/Getty Images/AFP

Julius Randle, RJ Barrett and Immanuel Quickley combined for 102 points and the New York Knicks exploded for 83 in the second half Monday night en route a come-from-behind, 131-115 triumph over the host Sacramento Kings.

Randle put up a career-high 46 points, Barrett chipped in with 29 and Quickley went for a season-high 27 off the bench. Their scoring allowed New York to earn a second win in as many days immediately after a seven-game losing streak.

De’Aaron Fox paced the Kings with 24 points to complement a game-high seven assists.

Using a game-opening, 12-2 run and 50 percent shooting in the first half, the Kings ran off to as much as a 20-point lead by the midpoint of the second quarter.

Still down 15 at the break, the Knicks used seven 3-pointers, three by Randle, to surge into an 81-80 lead with 4:34 left in the third quarter and gradually pulled away from there to win comfortably.

Julius Randle was DOMINANT in the second-half, erupting for 33 points to lead the @nyknicks to the comeback victory and notching a career-high in points and three-pointers made! #NewYorkForever@J30_RANDLE: 46 PTS, 10 REB, 8 3PM pic.twitter.com/YTdIJtFJlc

His 46 points were one more than his previous career-best, which occurred as a member of the New Orleans Pelicans in a game against the Portland Trail Blazers on March 15, 2019. He hadn’t totaled more than 35 previously in a game this season.

Randle also found time for a team-high 10 rebounds to complete his 29th double-double of the campaign.

Quickley’s 27 points, a big chunk of which came on 10-of-11 free-throw shooting, represented the second-highest total of his career. On Jan. 24, 2021, Quickley scored 31 at Portland.

Evan Fournier, who had three of the 3-pointers, added 15 points for the Knicks, who evened their record at 2-2 on a seven-game trip.

Domantas Sabonis put up 19 points and a game-high 13 rebounds for the Kings, who were returning home from a 2-3 trip that ended with a one-point loss to the Dallas Mavericks on Saturday.

Harrison Barnes (23 points), Donte DiVincenzo (13) and Davion Mitchell (10) also scored in double figures for Sacramento, which lost despite shooting 48.8 percent from the field. The Knicks finished at 51.1 percent.