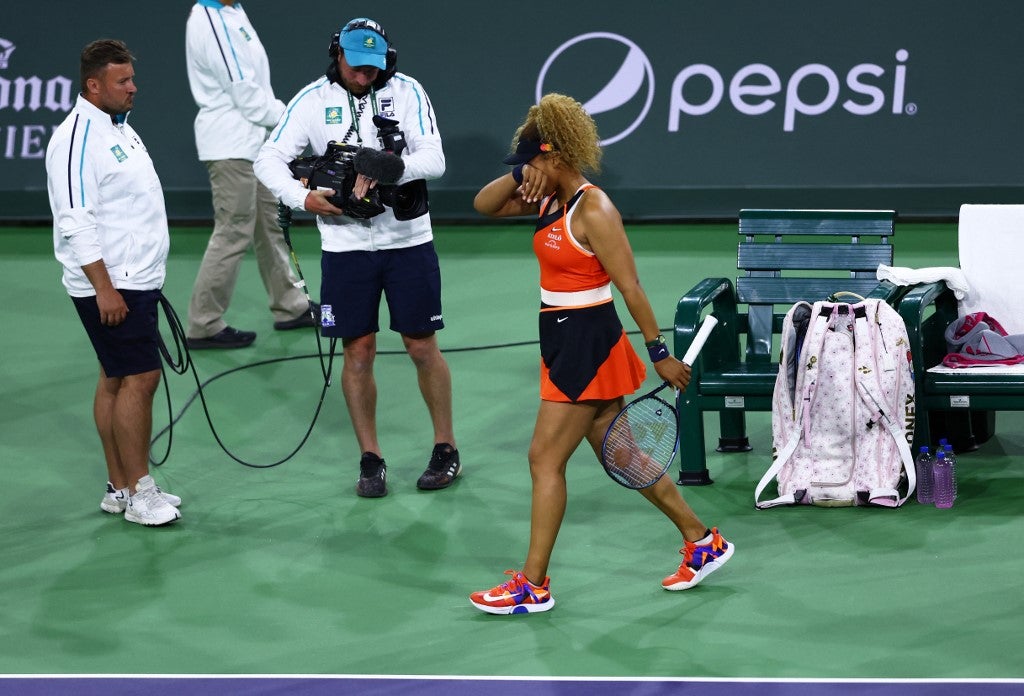 Naomi Osaka of Japan walks back to the baseline after becoming upset from a comment made by a spectator while playing against Veronika Kudermetova of Russia in their second round match on Day 6 of the BNP Paribas Open at the Indian Wells Tennis Garden on March 12, 2022 in Indian Wells, California. Clive Brunskill/Getty Images/AFP

INDIAN WELLS, Calif. – Naomi Osaka was rattled by a heckler early in her second round match against Veronika Kudermetova on Saturday and never recovered as she fell 6-0 6-4 at Indian Wells.

After being broken in the first game, a fan shouted “Naomi, you suck” and Osaka could later be seen wiping away tears.

After the match, the event’s 2018 champion addressed the crowd on center court, saying the incident reminded her of when Venus and Serena Williams were booed at the tournament in 2001.

“I’ve been heckled before and it didn’t really bother me,” Osaka said while holding back tears.

“But being heckled here. I’ve watched video of Venus and Serena get heckled here and if you’ve never watched it, you should watch it. And I don’t know why, but it went into my head and got replayed a lot.”

“I just want to say thank you and congratulations,” she concluded.

Osaka has been open about her struggles with mental wellness in the past and took a break from the sport following her upset loss at last year’s US Open. She said she was in a great place emotionally coming into the tournament. Veronika Kudermetova of Russia celebrates to the crowd after her straight-sets victory against Naomi Osaka of Japan in their second-round match on Day 6 of the BNP Paribas Open at the Indian Wells Tennis Garden on March 12, 2022 in Indian Wells, California. Clive Brunskill/Getty Images/AFP

Kudermetova stayed locked in despite the drama and continued her hot start to the year, outplaying the four-time Grand Slam champion even when she regrouped in the second set.

“It was a really tough match for me against Naomi,” she said.

“She is a great player, she’s a good fighter, and I’m really happy about my performance today. I was so focused and I’m so happy to be here and play in front of you guys.”

Naomi Osaka at peace with herself ahead of Indian Wells tournament