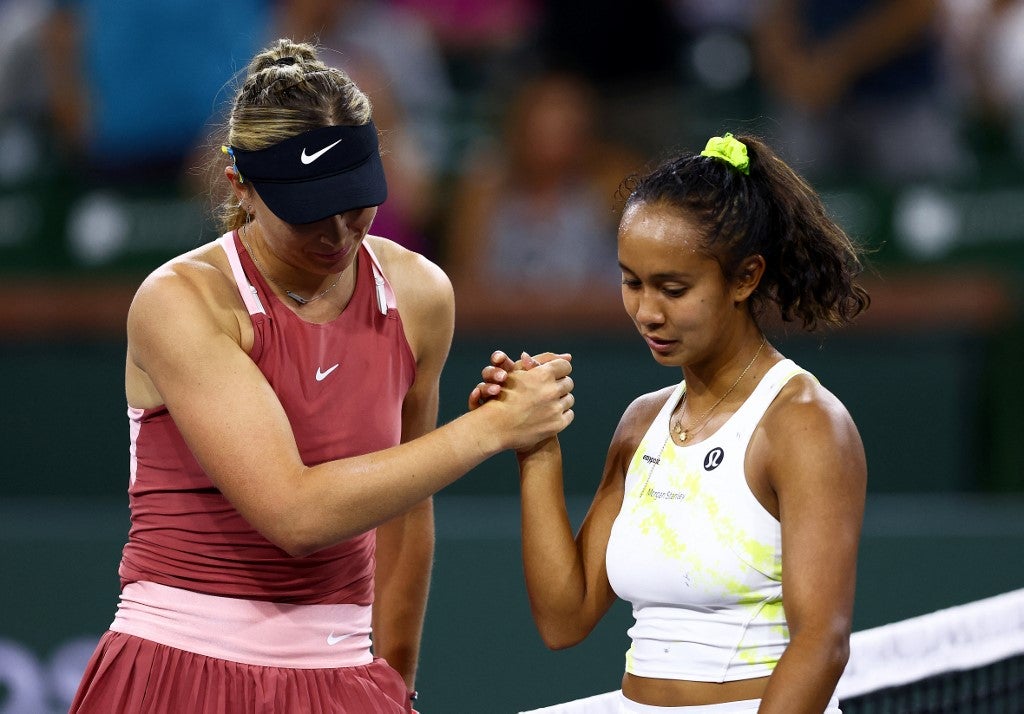 Paula Badosa of Spain shakes hands at the net after her straight sets victory against Leylah Fernandez of Canada in their fourth round match on Day 9 of the BNP Paribas Open at the Indian Wells Tennis Garden on March 15, 2022 in Indian Wells, California. Clive Brunskill/Getty Images/AFP

Seeking to become the first woman to defend the Indian Wells title in over three decades, Paula Badosa powered past Leylah Fernandez 6-4 6-4 to reach the quarterfinals on Tuesday while Simona Halep and Iga Swiatek also advanced.

Badosa, who is looking to emulate Martina Navratilova’s feat of retaining the crown in 1990-91, converted three out of her 12 break point opportunities and the Spaniard held her nerve in key moments of the tight contest to prevail.

The Sydney champion has not dropped a set at the WTA 1000 tournament in the Southern California desert, as she looks to secure only the fourth title of her career. Badosa takes on Veronika Kudermetova or Marketa Vondrousova next.

Badosa drew first blood in the opening set when she broke for a 4-3 lead and although U.S. Open runner-up Fernandez hit back with a break, the Spaniard raised her level to take the early advantage in the contest.

After a sluggish start to the second set, she held serve in a five-deuce game to go up 5-3 before closing out the victory.

Halep dispatched fellow Romanian Sorana Cirstea 6-1 6-4 as the former world number one, who won the tournament seven years ago, cruised through the first set with help from her error-prone opponent.

Cirstea took a 2-0 lead to start the second but the two-time major champion battled back, sealing the victory when the world number 27 sent a backhand wide on match point. A beaming Halep blew a kiss to the television cameras, pumped her fist and waved excitedly to the crowd at Stadium One after winning the Romanian derby. Halep is now 19-0 in matches against her compatriots.

“But I go on court and just think about myself, I don’t pay attention to who I have to play. I have a plan that I have to do, and today was a pretty solid victory. I felt good on court.”

Halep will have her hands full in the quarters when she faces Petra Martic after the Czech defeated Ludmilla Samsonova 7-6(6) 6-4.

World number 79 Martic has been hot in the desert, taking out 19th seeded Tamara Zidansek in the second round before outlasting U.S. Open champion Emma Raducanu on Sunday.

Martic said having a short memory has been key to her recent run of success.

“I’m a bit of a perfectionist so that definitely doesn’t help always,” she told reporters. “I try not to judge myself for the mistakes… I just try to compete and fight until the end.”

Kerber broke early in the third for a 3-1 lead but the third seeded Swiatek broke back to level at 3-3 and rolled on.

The 20-year-old will face Madison Keys on Wednesday after the big-serving American sent British qualifier Harriet Dart packing with a 6-1 6-4 victory.

Greek Maria Sakkari also went through when her opponent Daria Gavrilova retired while trailing 4-1 due to an adductor problem.