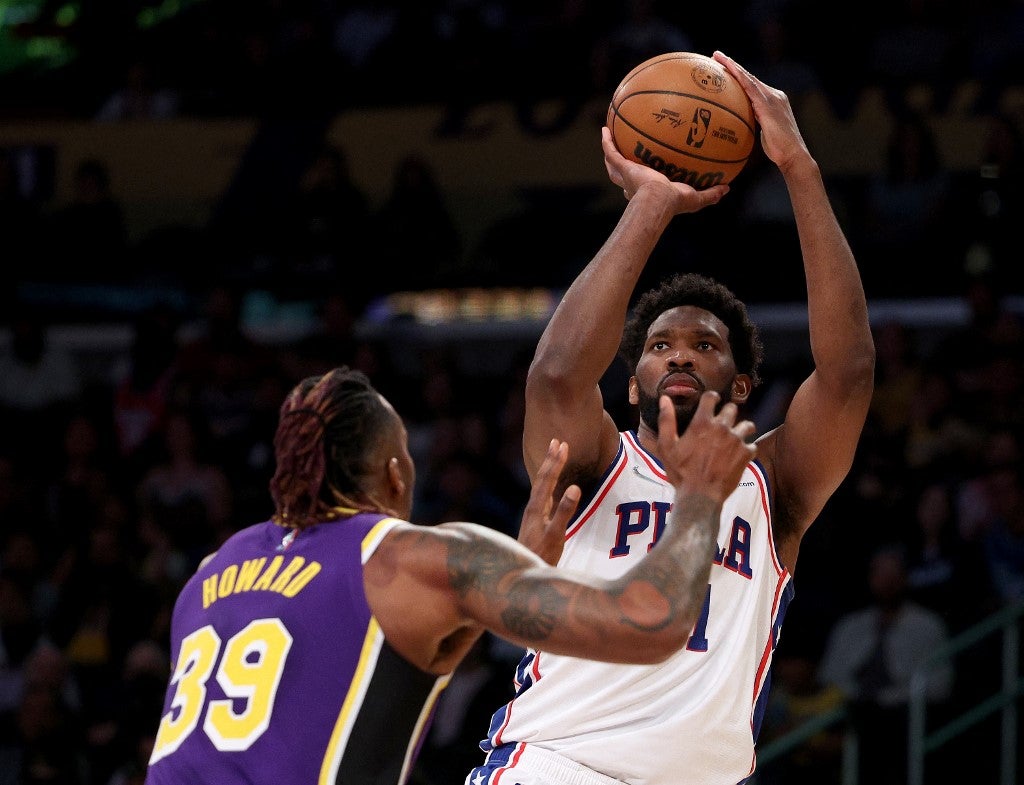 Joel Embiid #21 of the Philadelphia 76ers scores on a jumper over Dwight Howard #39 of the Los Angeles Lakers during the first half at Crypto.com Arena on March 23, 2022 in Los Angeles, California. Harry How/Getty Images/AFP Copyright 2022 NBAE

James was a late scratch from the Lakers lineup with left knee soreness, but Dwight Howard helped pick up the slack in his absence. Howard scored 24 points — his most in a game since November 2018 — and matched Russell Westbrook for the top mark on the team Wednesday.

🔥 @JoelEmbiid does it on both ends in the @sixers win!

Behind the veteran duo, Los Angeles went into the fourth quarter trailing by just two points. The Lakers remained within striking distance throughout the final period, but they could never quite bridge the gap.

Tyrese Maxey and Tobias Harris backed Embiid and Harden with 21 and 20 points, respectively. Maxey also dished seven assists and grabbed five rebounds to finish the night with a plus-minus rating of 17, second on the Philadelphia roster only to Embiid’s plus-20.

Maxey and Harris keyed a crucial Sixers run late, as Austin Reaves scored on a putback with 5:31 remaining in regulation that pulled the Lakers to a 107-104 deficit. Harris scored on the ensuing Philadelphia possession, then rebounded a missed free-throw attempt by Howard.

Maxey added a bucket on the other end, then hit a 3-pointer following a Lakers turnover. The quick 7-1 burst gave the Sixers some cushion down the stretch and Los Angeles was unable to pull within a single possession the rest of the way.

Los Angeles finished with the edge in points in the paint at 66-60, and connected on one more 3-point attempt than Philadelphia. The Sixers shot 10-of-27 from the deep, and the Lakers went 11-of-30.

Los Angeles also dominated in bench points, with Malik Monk’s 23 and Carmelo Anthony’s 20 pacing the Lakers to 48 total. Philadelphia’s reserves finished with 27 points, led by Georges Niang and DeAndre Jordan each with nine.