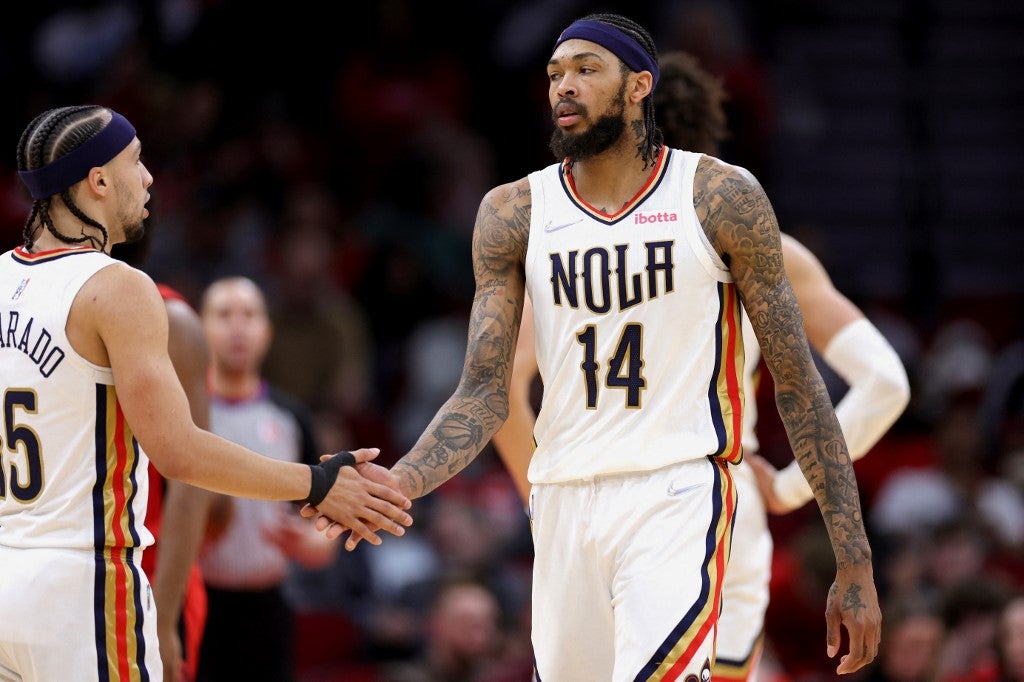 Brandon Ingram #14 high fives Jose Alvarado #15 of the New Orleans Pelicans during the second half at Toyota Center on February 06, 2022 in Houston, Texas. Carmen Mandato/Getty Images/AFP

Brandon Ingram returned from a 10-game absence to score 26 points and the host New Orleans Pelicans overcame a 23-point deficit to beat the Los Angeles Lakers 116-108 on Sunday night.

The Lakers (31-43) led by 23 in the second quarter and by 20 at halftime, but rookie Trey Murphy III, who finished with 21 points, led a third-quarter comeback before Ingram, who had been sidelined by a hamstring strain, took over in the fourth.

The Pelicans rally from a 23-point deficit to take down the Lakers in NoLa! pic.twitter.com/MmFRQr8n2l

Jonas Valanciunas added 19 points and 12 rebounds, CJ McCollum scored 18 and Herbert Jones Jr. had 16 points and a season-high six steals for the Pelicans (32-43), who moved a half-game in front of the Lakers into ninth place in the Western Conference.

The comeback was one point short of the largest ever for New Orleans, which clinched the season series against the Lakers with one game remaining April 1 in Los Angeles.

LeBron James scored 39 points, Malik Monk added 23 and Russell Westbrook had 18 for the Lakers, who were outscored 67-39 in the second half.

Valanciunas made two free throws to give New Orleans its first lead of the game at 98-96 with just over eight minutes left. Los Angeles briefly regained a one-point lead, but Ingram scored seven points as the Pelicans took a 111-105 lead.

Monk’s 3-pointer cut the lead in half, but Valanciunas made a layup and McCollum added a basket via a goaltending call on James. That gave New Orleans a 115-108 lead with 29.5 seconds left.

James made two 3-pointers and two more baskets as the Lakers scored the first 12 points of the game and took a 31-23 lead at the end of the first quarter. They held a 69-49 halftime lead.

Murphy led a third-quarter charge by the Pelicans, who got within two points twice before Westbrook’s layup gave Los Angeles a 94-90 lead at the end of the period. Murphy scored 16, making all three of his 3-point attempts, as the Pelicans outscored the Lakers 41-25 in the period.

NBA: Spurs tighten up play-in chase with win over Pelicans