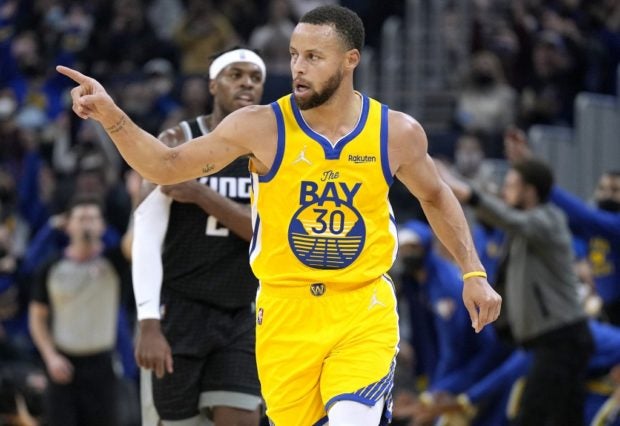 LOS ANGELES – Golden State guard Stephen Curry says he is “very optimistic” he could return from a foot injury in time for the Warriors’ NBA playoff opener against Denver on Saturday.

Curry, sidelined almost a month with a sprained ligament in his left foot, said on teammate Draymond Green’s podcast that he did not want to miss a minute of the Warriors’ return to the playoffs after a two-year absence.

“The goal has always been game one, the goal still remains game one,” Curry said.

“Very optimistic that it’ll be game one.

“And we know what time of year it is. We haven’t been in the playoffs for two years, it is kind of weird to think about that. I’m so freaking juiced because I know how much I love that environment. I don’t want to miss any of it.”

Curry took part in the Warriors’ first playoff practice on Wednesday, when he said he was feeling “pretty good” after drills, shooting and skills work.

Curry finished the regular season with averages of 25.5 points, 6.3 assists and 5.2 rebounds over 64 games.

“We know what he brings, what he does on the court and how he helps out and how he makes things difficult for other teams and easier for us,” Payton said. “So we’re just sticking to the game plan.”

The Warriors went 1-6 without Curry from March 20-30, but closed the season on a five-game winning streak to grab the third seed in the Western Conference.

The Warriors face a searching first-round test against a Nuggets team led by Nikola Jokic, who is in the race for a second straight NBA Most Valuable Player award.

The Serbian star finished the season averaging 27.1 points, 13.8 rebounds and 7.9 assists per game.

“He’s dangerous in every regard — no matter how you play him, he’s got an answer for you,” Warriors coach Steve Kerr said.

“It’s pick-your-poison. He can score one-on-one down on the block, brilliant passer. We’re going to have to be really, really sharp, because he’s not only one of the best players in the league, he’s one of the smartest. He’ll pick you apart if you’re not aware and on guard.”

In other first-round series getting underway on Saturday, the Dallas Mavericks host the Utah Jazz with injury concerns surrounding Mavs star Luka Doncic.

The Memphis Grizzlies host the Minnesota Timberwolves in game one of their Western Conference series, while in the East Joel Embiid and the Philadelphia 76ers host the Toronto Raptors.

On Sunday, the Boston Celtics host the Brooklyn Nets while Giannis Antetokounmpo and the reigning champion Milwaukee Bucks open against the Chicago Bulls.

Eastern Conference top seeds Miami and West leaders Phoenix open at home on Sunday, although both were awaiting the outcomes of Friday’s final play-in games to learn their opponents.

The Heat will face either the Cleveland Cavaliers or Atlanta Hawks while the Suns will take on either the Los Angeles Clippers or New Orleans Pelicans.