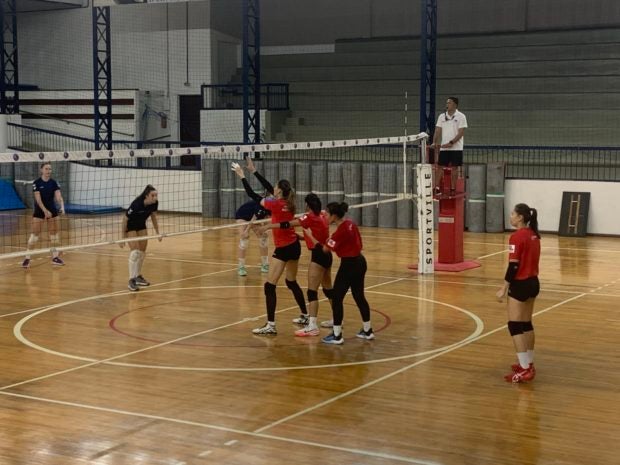 BARUERI, BRAZIL—Gifted with height, athleticism and cohesiveness, the hometown squad exudes a menacing appearance that could involuntarily strike fear in the heart of the opposition.

The Philippine national women’s volleyball team readily dismissed such talk and toppled the Barueri Volleyball Club under-21 squad right on its turf in straight sets, 33-31, 26-24, 25-20, 25-17, on a chilly Wednesday evening.

Jaja Santiago and Ces Molina gamely put up a gallant stand, saving the PH spikers from the brink in the first two sets along with the heroics of middle blockers Ria Meneses, Dell Palomata and setter Kyle Negrito.

Trailing by 11 points in the second frame, they turned to power-smashers Alyssa Valdez and Kat Tolentino for redemption as the Filipinos surprisingly erased the deficit and were eventually two sets up going into the third.

“Barueri’s under-21 has been together for three years. When the players get older, they simply move on to the elite team,’’ said head coach Jorge Edson Souza de Brito, pointing out the movement and recruitment of players at BVC, a Superliga A professional team.

The national spikers, who won two of their three tuneup matches in the two-week training camp, will face the under-21 BVC club team anew on Thursday.

“They (Barueri) had the opportunity to win a set in two occasions, but we were able to capitalize on their mistakes and defend well in order to pull through,’’ said de Brito.

Following a 36-hour journey from Manila, De Brito and the coaching staff composed of Odjie Mamon, Grace Antigua, Raffy Mosuela and Tina Salak immediately subjected the team to a workout the day after before playing a Superliga A club in Sao Caetano on the same day.

“The team has been consistently improving since arriving here. They have already adjusted and you can see it during practices and during the games,’’ said PNVF executive board member and national team chairperson Tony Boy Liao.

By reversing the Brazilians twice, the PH spikers eventually took the third set as well built on the continued assault of Santiago and Tolentino through the well-timed sets launched by Iris Tolenada.

The national squad again trailed at the beginning of the fourth frame, but Jema Galanza, team captain Aby Marano, Majoy Baron and Negrito found holes in Barueri’s defense and finished off the home squad for good.

The PH spikers are aiming to secure a medal in the SEA Games to end a long drought that started when the team claimed a bronze medal in the 2005 SEA Games in Manila.

“I will disclose to you my evaluation of the team after tomorrow’s (Thursday) match,’’ said De Brito, elated with the ongoing progress of the team since the group arrived a week ago.