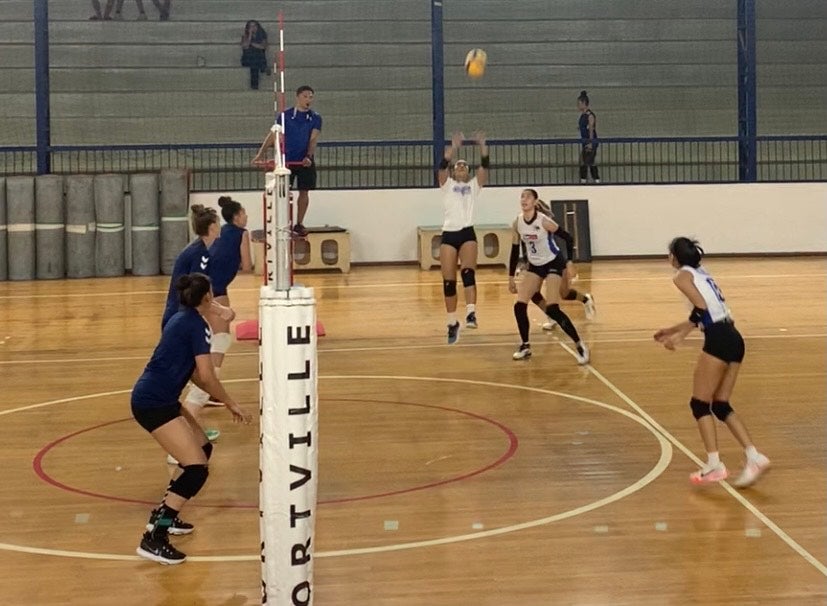 Filipino spikers in another tune-up vs under-21 squad of the Barueri Volleyball Club. JUNE NAVARRO/INQUIRER

BARUERI, BRAZIL—The Philippine women’s national volleyball team concluded its series of friendlies with another walloping triumph over the under-21 squad of the Barueri Volleyball Club, a clear indication of the country’s readiness in the fast approaching 31st Southeast Asian Games in Hanoi, Vietnam.

Mylene Paat and Jaja Santiago pummeled the Brazilian end of the floor without leniency, teaming up with fellow Premiere Volleyball League stars Alyssa Valdez and Ces Molina in an emphatic 25-18, 25-14, 25-23, 25-18 win before a clique of wildly cheering Filipino fans at Sportville here.

Team captain Aby Marano also showed prowess in the middle frames together with Dell Palomata and Ria Meneses as setters Iris Tolenada and Kyle Negrito seamlessly provided the scoring chances that made the team look good.

Liberos Kath Arado and Dawn Macandili were likewise operating with high efficiency on the defensive end as the PH spikers warded off the Brazilian attacks with super receiving at the back row.

“Since we came here, we really improved a lot. We started from zero and have gradually improved in all areas. But of course it’s not enough,’’ said de Brito as the team prepares to wrap up its two-week training camp with one final practice session on Wednesday.

The power-hitting Paat delivered 17 points, highlighted by 13 attacks and two blocks, and Santiago smashed her way to 15 points while Valdez had 13 points, including four service aces for the Filipinos, who defeated the same squad three games in a row.

Also feature Premiere Volleyball League stars Jema Galanza, Kat Tolentino and Majoy Baron, the national spikers dropped their first tuneup together as a team against Brazilian club squad Sao Caetano less than a day after arriving from a long 36-hour trip from Manila.

The never dropped a single tuneup since then, crushing Sesi Sorocaba in straight sets on the enemy’s turf before getting the better of the BVC under-21 team in three matches.

“I can use any player because I trust them as a team. We always find the best way to utilize our players,’’ said de Brito, backed by a highly competent coaching staff of former national team players Odjie Mamon, Grace Antigua, Raffy Mosuela, Tina Salak and physical therapist Grace Gomez.

The team will head back to Manila on Wednesday night and arrive in the country on Friday afternoon. De Brito announced a two-day rest before returning to practice on May 2. They are due to leave for Hanoi, Vietnam on May 10 where the campaign to win a medal begins.

The Philippine National Volleyball Federation headed by its president Ramon “Tats’’ Suzara has brought the women’s squad here for a two-week camp supported by the Philippine Sports Commission, Philippine Olympic Committee, Rebisco, PLDT and the City of Taguig.