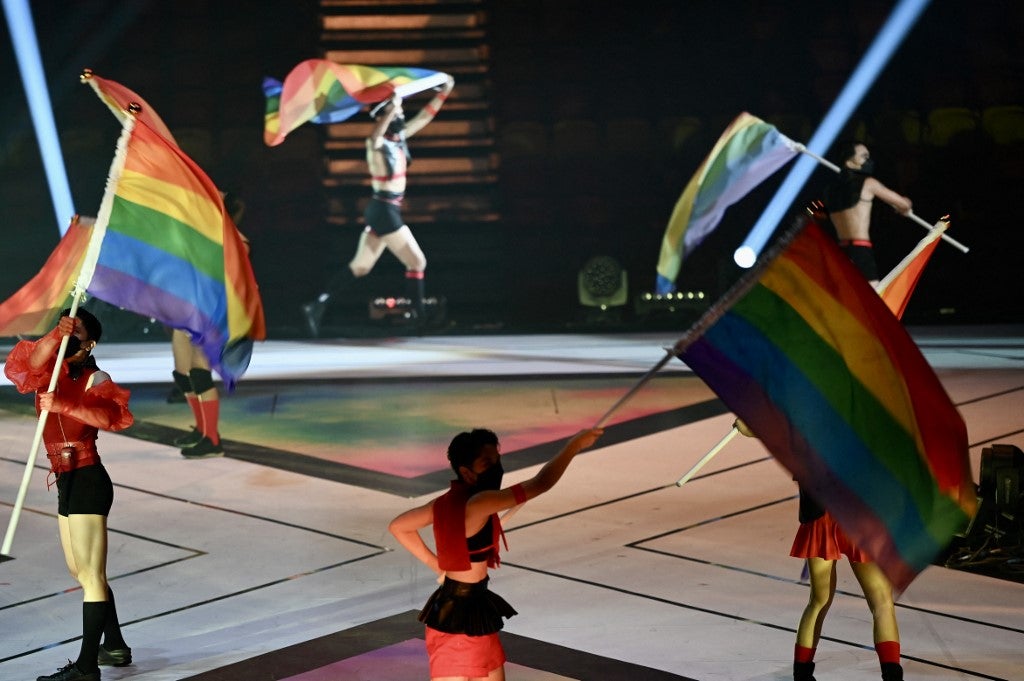 Dancers perform on a stage during the opening ceremony of the Asia Pride Games in Taipei on April 29, 2022. (Photo by Sam Yeh / AFP)

Taiwan on Friday opened the inaugural Asian Pride Games with a colorful ceremony drawing hundreds of athletes and spectators, as the island shifts away from a zero-COVID policy despite a surge in infections.

The games are the successor to The Straits Games, founded in Malaysia 20 years ago and considered the first international gay sports tournament in Asia.

Taiwan, the first place in Asia to legalize gay marriage, was chosen to host the newly named games for 2021 but the event was postponed a year because of the pandemic.

Organizers went ahead despite a sharp uptick in infections after Taiwan’s government signaled plans to move away from its zero-COVID policy.

But international representation has been severely curtailed by Taiwan’s strict border controls that have stopped most foreigners from entering the last two years.

Organizers say around 2,500 Taiwanese and 250 mostly Taiwan-based foreign athletes are set to compete in 12 categories open to heterosexual, gay and transgender people. Athletes stand with rainbow flags during the opening ceremony of the Asia Pride Games in Taipei on April 29, 2022. (Photo by Sam Yeh / AFP)

At Friday’s opening, singers and dancers took the stage in a basketball stadium in Taipei, some waved rainbow flags and ribbons while drag queens lip-synched pop songs.

Taiwan has been on the vanguard of the gay rights movement in Asia, becoming the region’s first place to legalize same-sex marriage in 2019.

But games organizer Yang Chih-chun said there has been little progress in the rest of Asia, which he described as “a desert for marriage equality”.

“We’ve worked very hard to make the event happen amid the pandemic as we hope that by hosting it in Taiwan, other Asian countries can see hopes for equality in same-sex marriage and in sports,” he told AFP.

Six transgender athletes will compete in the non-binary gender division in body-building, added Yang, president of the Taiwan Gay Sports and Movement Association.

The Asian Pride Games is the only gay-themed sporting event in the region this year, after the Gay Games to be co-hosted by Hong Kong and Mexico’s Guadalajara was postponed to 2023.

China is the only major economy in the world still hewing to a zero-COVID strategy and Hong Kong remains cut off internationally as it enters its third year of strict pandemic controls.

As a result multiple sporting and conference events have been cancelled in Hong Kong.

For the Asian Pride Games, Taiwanese athletes will be able to compete under the name “Taiwan.”

Organizers of the Gay Games had previously said Taiwan would need to go by “Chinese Taipei”, the name it uses for major sporting events such as the Olympics because of Chinese pressure.

Beijing regards Taiwan as its own territory and baulks at any use of the island’s name.

Last year AFP revealed the Taiwan Gay Sports and Movement Association had decided not to send a team to the Gay Games in Hong Kong because of fears their athletes and staff could be arrested if they waved the island’s flag or used its name.