Jordan Poole of the Golden State Warriors goes to the basket against De’Anthony Melton of the Memphis Grizzlies during Game One of the Western Conference Semifinals of the NBA Playoffs at FedExForum on May 01, 2022 in Memphis, Tennessee.  (Getty Images via AFP)

WASHINGTON – Reserve guard Jordan Poole had 31 points, nine rebounds and eight assists to power the Golden State Warriors over the Memphis Grizzlies, 117-116 in an NBA playoff series opener Sunday despite the ejection of Draymond Green.

“Big win for us to start the series, get home court advantage,” Warriors guard Stephen Curry said. “And get greedy in the second game.”

The Western Conference second round best-of-seven matchup will continue Tuesday at Memphis. Klay Thompson of the Golden State Warriors reacts during the game against the Memphis Grizzlies during Game One of the Western Conference Semifinals of the NBA Playoffs at FedExForum on May 01, 2022 in Memphis, Tennessee.  (Getty Images via AFP)

Curry added 24 points for Golden State while Andrew Wiggins had 17 and Thompson 15.

Morant had 34 points, 10 assists and nine rebounds and Jaren Jackson had 33 points and 10 rebounds for Memphis.

The Warriors were delivered a major setback when forward Green, a star defender in Golden State’s title runs in 2015, 2017 and 2018, was ejected in the second quarter for a flagrant-2 foul, striking Brandon Clarke in the face and pulling him down  by the jersey.

“This is a huge game to win, especially with him going out early,” Poole said. “We were able to fill in for the energy he has.”

The Warriors responded with a strong third-quarter start.

“We were determined,” Warriors coach Steve Kerr said. “We knew that was a tough break that didn’t go our way. We were shocked by the decision. We went on a run in the third quarter to get the lead. That established we weren’t going anywhere.”

Poole scored a playoff career high in 38 minutes off the bench, hitting 12-of-20 from the floor and 5-of-10 from 3-point range.

“He’s a hooper, ultimate confidence in himself,” Curry said. “You can’t teach that preparation for the moment. You either have it or you don’t and he does.” 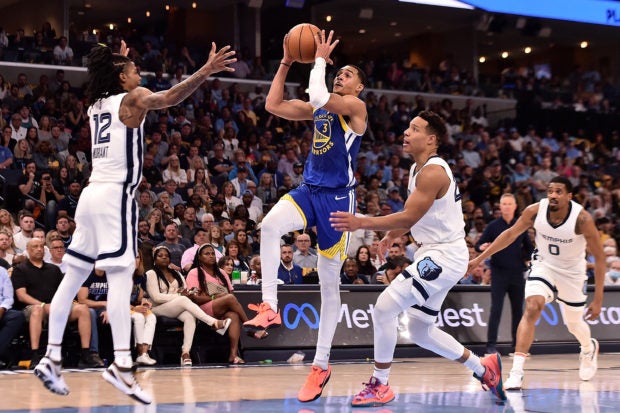 Jordan Poole of the Golden State Warriors goes to the basket against Ja Morant of the Memphis Grizzlies during Game One of the Western Conference Semifinals of the NBA Playoffs at FedExForum on May 01, 2022 in Memphis, Tennessee.  (Getty Images via AFP)

Poole led the Warriors with 14 first-half points and added 10 in the third quarter as Golden State took a 91-90 lead.

“At the core we’ve got championship DNA and we want to utilize that,” Curry said. “At this stage that’s what it’s all about.”

Poole scored seven points in a 12-3 run to open the fourth and give the Warriors a 103-93 lead before the Grizzlies battled back.

Thompson missed two late free throws and Memphis had a final shot but Morant missed a driving layup at the buzzer.

“He had a great look. It just didn’t happen to go in,” Memphis coach Taylor Jenkins said. “I love the way our guys competed. It just wasn’t good enough.”