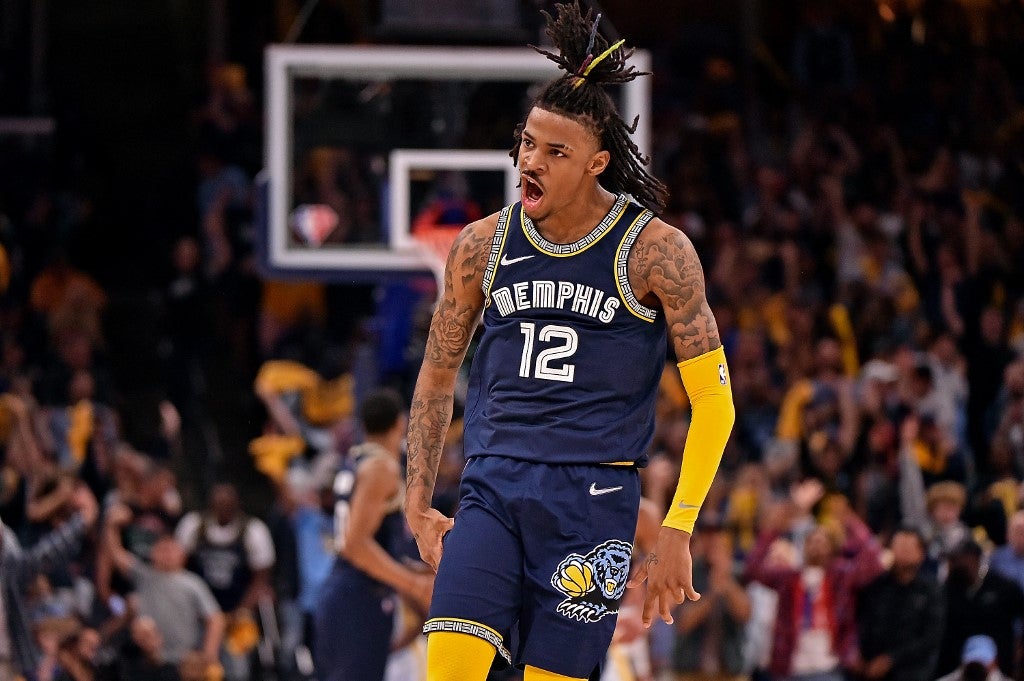 Ja Morant #12 of the Memphis Grizzlies reacts against the Golden State Warriors during Game Two of the Western Conference Semifinals of the NBA Playoffs at FedExForum on May 03, 2022 in Memphis, Tennessee. Justin Ford/Getty Images/AFP

Ja Morant exploded for 47 points, tying his postseason high, and scored Memphis’ final 15 points as the Grizzlies evened their Western Conference semifinal series against the visiting Golden State Warriors at a game apiece with a 106-101 victory on Tuesday night.

In a game that featured the ejection of Grizzlies defensive ace Dillon Brooks and stitches to Warriors star Draymond Green’s face, Memphis avenged a 117-116 home loss in Game 1 as the best-of-seven travels to San Francisco for Games 3 and 4 on Saturday and Monday.

Morant’s late flurry began after Stephen Curry nailed a 3-pointer that gave third-seeded Golden State a 95-91 lead with 4:33 to go.

The young standout’s step-back 3-pointer with 2:28 remaining put the Grizzlies on top 98-97. After Curry countered with a layup, Morant dropped in a 7-foot floater to give Memphis the lead for good with 1:42 to go.

Golden State hung within 102-101 with 40.2 seconds remaining after Green dropped in a layup, but Morant countered with another floater with 30.7 seconds left to open a three-point advantage.

Following Klay Thompson’s traveling violation, Morant iced the win with two free throws with 13.2 seconds remaining. He equaled his point total in a loss to the Utah Jazz in the first round of last season’s playoffs.

EVERY BUCKET of @JaMorant's 47-point (ties playoff career-high) performance to tie up the series for the @memgrizz! #GrindCity@JaMorant: 47 PTS, 8 REB, 8 AST, 3 STL, 5 3PM

Morant shot 5-for-12 on 3-pointers, helping the Grizzlies outscore Golden State 42-21 from beyond the arc.

Despite hitting just 3 of 11 3-point attempts, Curry led the Warriors with 27 points. Jordan Poole added 20, while Andrew Wiggins had 16 and Thompson, who went just 2-for-12 on treys, had 12.

Green finished with a game-high 10 rebounds to go with seven assists and six points. Curry also had nine rebounds while tying Morant with eight assists.

In a tight game from start to finish, the Grizzlies led 56-51 at halftime, but two early incidents were much more significant than the five-point difference.

Just 2:52 into the game, Brooks was ejected for a hard swipe at Gary Payton II’s head on a layup attempt. Brooks was slapped with a flagrant foul-2, which includes an automatic ejection, while Payton was lost for the rest of the game with a left elbow injury incurred on his hard fall.

Seconds later, Green took an inadvertent elbow to the right side of his face from Xavier Tillman, forcing him to leave the game and requiring stitches. He was able to return to start the second quarter.

Morant had 23 of his 47 points in the first half, during which the Warriors missed 15 of 19 from long range. The Grizzlies missed 13 of 20 treys.