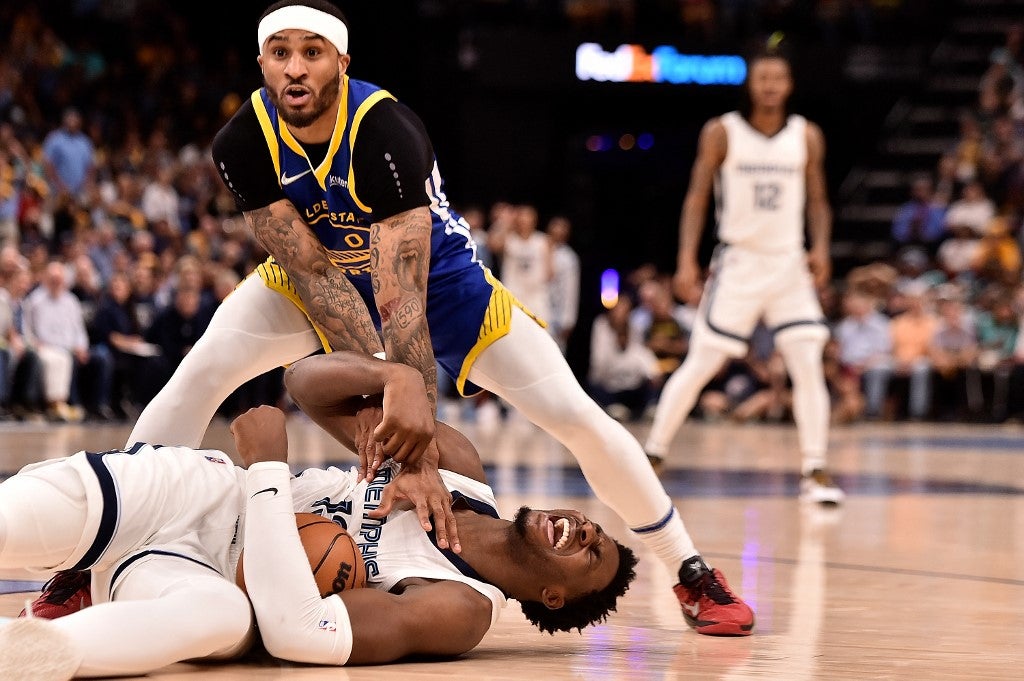 FLE–Gary Payton II #0 of the Golden State Warriors and Jaren Jackson Jr. #13 of the Memphis Grizzlies fight for the ball during Game One of the Western Conference Semifinals of the NBA Playoffs at FedExForum on May 01, 2022 in Memphis, Tennessee. Justin Ford/Getty Images/AFP

Brooks was tossed from a bruising game two of their NBA playoff series after less than three minutes of the first quarter for an ugly mid-air challenge that flattened Payton as he drove for a basket.

Payton, an increasingly influential figure for Golden State during the postseason, collapsed in agony and played no further part in the game, eventually won 106-101 by Memphis.

Kerr revealed Payton had suffered an elbow fracture — and could not hide his disdain for Brooks’ actions.

“I don’t know if it was intentional, but it was dirty,” Kerr said.

“But there’s a code in this league that players follow where you never put a guy’s season or career in jeopardy by taking somebody out in mid-air and clubbing him across the head and ultimately fracturing Gary’s elbow.”

Payton, 29, has had a nomadic professional career and only joined the Warriors last year from Canada’s Raptors 905 team, who play in the NBA’s minor G League.

“This is a guy who’s been toiling trying to make it the last six years in this league, finally found a home and just playing his butt off this year,” Kerr said.

“He’s in the playoffs, this should be the time of his life, and a guy comes in and whacks him across the head in mid-air.

“Dillon Brooks broke the code. That’s how I see it.”

“He broke the code” pic.twitter.com/KNI4GNPpsS

“It’s a tough way to start the game,” Curry said. “Feel bad for GP (Payton). This was his time to shine and a play like that knocks him out of the game.

“Everyone was frustrated by the play. GP’s tough so when you see him in pain like that you know it’s not something light.

“When something like that happens it pisses you off.”

There was further controversy in the first quarter when Warriors star Draymond Green was bloodied by a swinging arm from Xavier Tillman.

Green needed stitches in the locker room following the incident but is likely to face a fine from the NBA after making a one-fingered gesture to fans as he left the court for treatment.

“If you’re going to boo somebody who’s bleeding in the eye after being elbowed in the face, you should get flipped off,” Green told reporters later.

“I’ll take the fine… if they’re gonna be that nasty, I can be nasty too. I’m assuming they cheered because they know I’ll be fined. Great. I make $25 million a year, I should be just fine.”