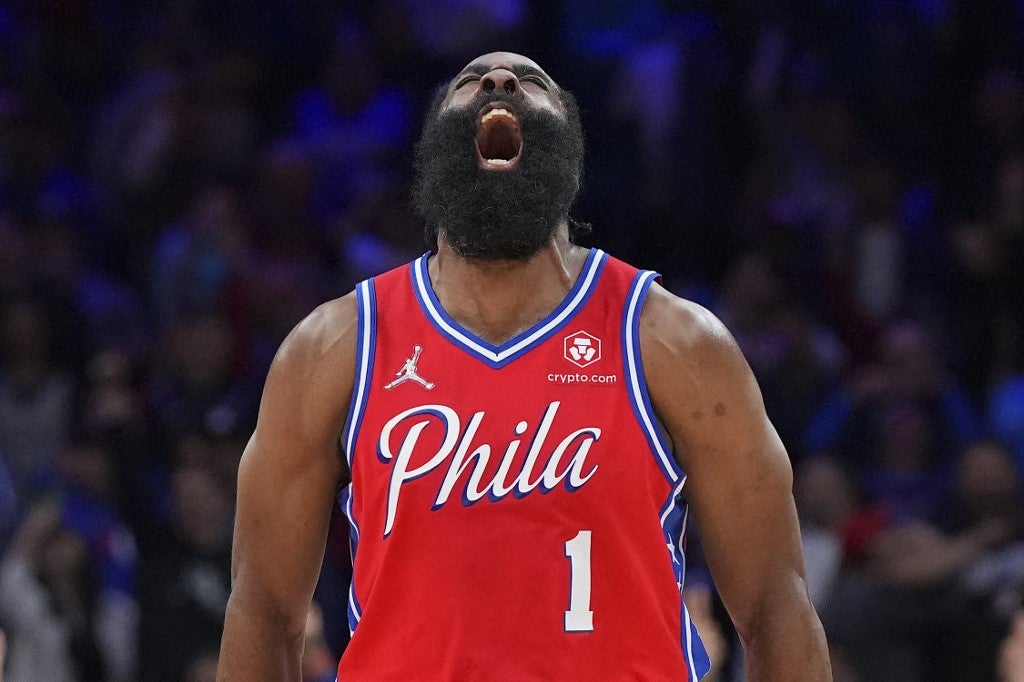 James Harden #1 of the Philadelphia 76ers reacts against the Miami Heat in the second half during Game Four of the 2022 NBA Playoffs Eastern Conference Semifinals at the Wells Fargo Center on May 8, 2022 in Philadelphia, Pennsylvania. The 76ers defeated the Heat 116-108. Mitchell Leff/Getty Images/AFP

Harden added nine assists and seven rebounds, applying the killing blow by drilling a 3-pointer with 1:07 remaining for a 114-103 advantage. The 76ers also got 24 points and 11 rebounds from Joel Embiid, while Tyrese Maxey hit for 18 points.

Harden took control in the 4th and led the @sixers to the Game 4 win to tie the series!

Game 5 of the series is set for Tuesday night in Miami, where the Heat easily won the first two games. But that was against a Philadelphia team missing Embiid, who was sidelined with a concussion and a fractured orbital bone in his right eye suffered in Game 6 of the 76ers’ first-round series win over Toronto.

Jimmy Butler was splendid in defeat for Miami, scoring a game-high 40 points on just 20 field goal attempts. However, he again didn’t have enough help from his teammates. Bam Adebayo added 21 points, but just two other Heat players hit for double figures.

The first quarter was classic back-and-forth basketball. Miami used the foul line to its advantage, drawing two fouls on Harden and Tobias Harris. But Philadelphia kept pace with a 3-point barrage and took a 30-28 lead into the second period, thanks to two Embiid foul shots with 8.4 seconds left.

Harden overcame his foul trouble in the second quarter to score 13 points, including a 3-pointer that capped a 12-2 run that gave the 76ers a 56-46 advantage. They took a 64-56 margin to halftime when Maxey canned a runner with 5.0 seconds on the clock.

Philadelphia extended the advantage to 11 early in the third quarter before the Heat steadily reeled it in behind Butler. He had a six-point possession to cut the lead to 74-70, and Miami drew within two before a Georges Niang layup made it 89-85 76ers after three.