SEA Games venues in Vietnam to be opened to spectators 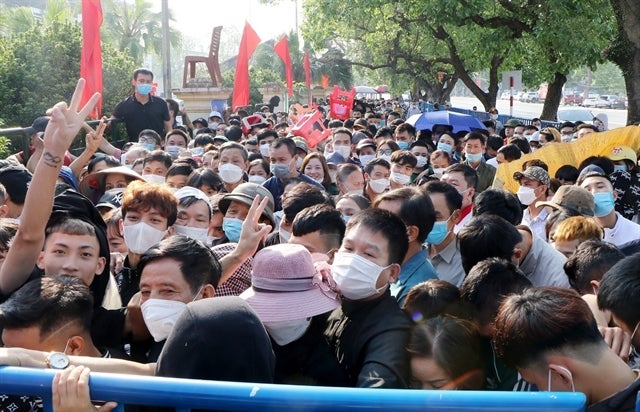 HANOI — Just a month ago, Vietnam was a hotspot for coronavirus cases in the region, now it is opening its Southeast Asian Games venues to the public including that of football which attracts tens of thousands of spectators.

Philippine delegation chief of mission Ramon Fernandez emerged from the final chiefs of mission meetings before the biennial games formally open on Thursday.

“The host country will open the venues to the fans and spectators as long as they strictly follow health and safety protocols,” said Fernandez, who is a member of the Philippine Sports Commission board.

Just like in the Philippines, cases in Vietnam has dropped to just over 3,000 average new cases the past week from as high as hundreds of thousands two months ago during the Omicron-fueled surge.

The country has already lost one major gold medal source when swimmer Luke Gebbie tested positive before planing into this capital.

The SEA Games is the second of biggest sporting event held in this part of the world behind last year’s Tokyo Olympics which was held behind closed doors.

There will be no charges at the gates, according to Fernandez, except for the crowd-drawer football events which will be held in big venues like Cam Pha Stadium for women’s competitions.

Public will also be allowed in the opening ceremonies on Thursday at My Dinh Stadum which seats 40,000 people.

“Tickets will only be sold during football matches where a large volume of spectators are expected,” said Fernandez.

Five to watch at SEA Games: From Olympic champions to trailblazers