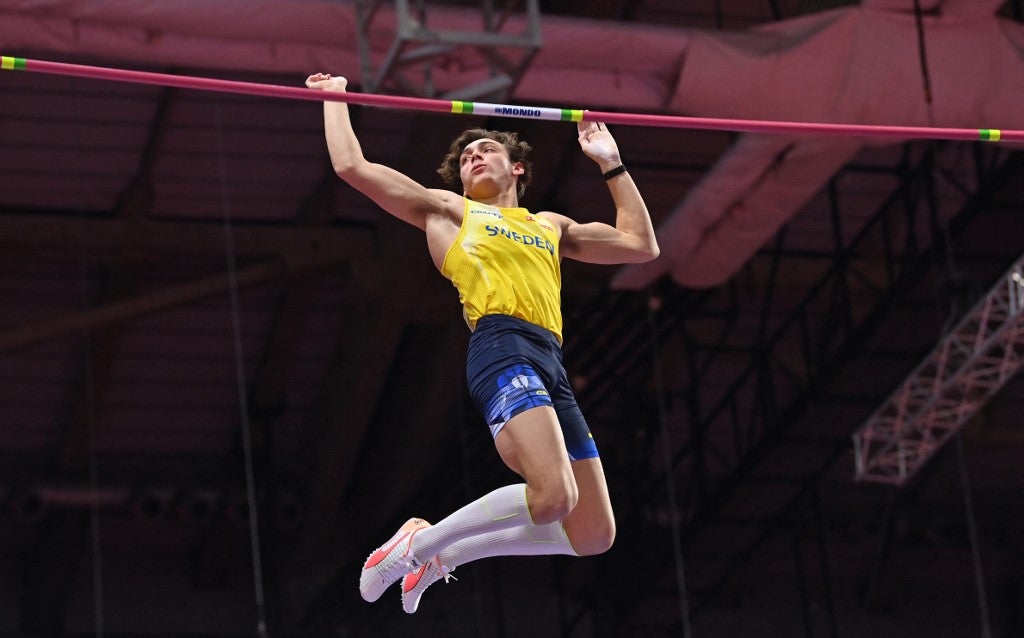 Sweden’s Armand Duplantis competes and breaks the new world indoor record in the men’s pole vault during The World Athletics Indoor Championships 2022 at the Stark Arena, in Belgrade, on March 20, 2022. (Photo by ANDREJ ISAKOVIC / AFP)

World record-holder Armand Duplantis made a smooth if unspectacular start to his outdoor season on Friday, winning the men’s pole vault at the Eugene Diamond League with a vault of 5.91m.

The US-born Swede — known as “Mondo” — had victory in hand when he made three failed attempts at 6.07 and said that left a sour taste in his mouth.

“I feel like when I go into any competition I want to get over six meters now,” said Duplantis, who set two world records in two weeks at the World Indoor Championships in March, taking the new benchmark to 6.20m.

He won at the Diamond League in Doha earlier this month, but that competition was moved indoors because of high winds, making Friday his first outdoor competition in a season where the World Championships will be held at the same venue in Eugene in July.

Duplantis said he was “just trying to get a feel for outdoors” at the event, held at Hayward Field.

American Chris Nilsen was second with a vault of 5.81, unable to match the 6.00 he set in South Dakota earlier this month. Norway’s Sondre Guttormsen was third, also clearing 5.81.

France’s Renaud Lavillenie, the 2012 Olympic champion who has a personal best of 6.16m, had a disappointing night, unable to clear 5.61m.

“Winning was the most important thing, but … I’m a little bitter about not hitting that 6.07 bar,” Duplantis said. “I felt good jumping … just barely nicked it off all three times.”

The pole vault had originally been scheduled for Saturday, but was moved, along with the women’s discus and high jump, because of expected rain.

Tokyo Olympic gold medallist Valarie Allman of the United States won the women’s discus with a throw of 68.35m. Her Croatian rival Sandra Perkovic was second with a throw of 65.50m and Germany’s Kristin Pudenz (62.58m) was third.

Until the decision to hold the field events on Friday, the highlights of the night were expected to be world record attempts in both the men’s and women’s 5,000m — neither of which came to fruition.

Ethiopia’s Milkesa Mengesha, who briefly seized the lead at 4,000m but couldn’t hold Cheptegei off, finished second in 13:01.11 and Kenya’s Daniel Simiu Ebenyo was third in 13:10.61.