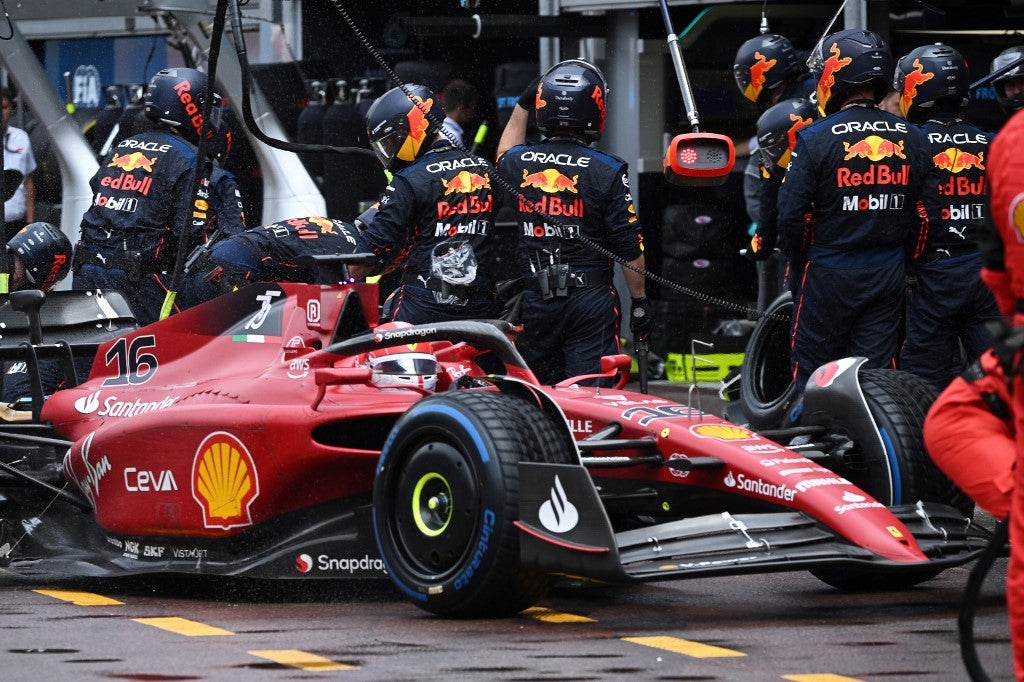 Ferrari’s Monegasque driver Charles Leclerc drives in the pit lane during the Monaco Formula 1 Grand Prix at the Monaco street circuit in Monaco, on May 29, 2022. (Photo by CHRISTIAN BRUNA / POOL / AFP)

A crestfallen Charles Leclerc reluctantly criticized his Ferrari team on Sunday after their bungled strategy and confused communications cost him a likely victory in his home Monaco Grand Prix.

The Mexican came home ahead of Carlos Sainz in the second Ferrari and his Red Bull teammate world champion Max Verstappen for his third career victory, after winning the 2020 Sakhir Grand Prix and the 2021 race in Baku.

Leclerc’s race hinged on a mistaken pit-stop call when he came in behind Sainz in a ‘double-stack’ as Ferrari sought to switch to slick dry tires in changing conditions.

But as he came in, the team realized rivals Red Bull were ‘under-cutting’ them by doing the same and attempted to change their decision and request him to stay out as he was poised to regain his lead.

“I don’t understand what made us change our minds,” said Leclerc. “We got ‘undercut’ and then stuck behind Carlos. There were a lot of mistakes and we cannot afford to do that.

“I’m used to getting back home disappointed, but we cannot do that, especially in a moment, now, where we are extremely strong. We need to take opportunities. We cannot lose points like this.

“I love my team. We will come back stronger, but it hurts a lot.’

He added that it was not only the bungled change of instruction that was mistaken, but the original decision to bring him in to swap from intermediates to ‘slick’ dry tires.

“The first one was a clear decision and a very wrong one. From that moment onwards, the mess started. I don’t know if it was panic – I don’t hear all the background stuff between the team so it’s not up to me to judge.

“The last message I had was not clear because I was told to come in and then to stay out, but I was already in the pit lane — and that’s when I let it out on the radio because I knew it was done.”

Asked, by Sky Sports, if he felt let down Ferrari, he was careful with his words.

“Let down is not the word,” he said. “Sometimes mistakes can happen, but there have been too many mistakes today.”

Sainz was also disappointed and claimed he might have won if he had not been released from his pit stop behind a slow lapped car.

“That cost me a win,” said the Spaniard. “We made the right call, pitted for the hard tyre, but an out-lap is never easy. I won’t complain too much. In this sport, it costs you.”

“Overall, it’s a disappointing result and a difficult race,” he said. “I understand Charles’ disappointment – he thinks something was wrong in our decisions.

“I think we underestimated the pace of the intermediate tires and we should have left him out longer, maybe to later on. Mistakes do happen and, more importantly, we need to understand why.”

Binotto added that Ferrari felt that Red Bull had breached the regulations by crossing a yellow line on exiting the pit lane. Race marshalls, however, later rejected the Ferrari complaints.

Binotto admitted that the team had made other errors including releasing Sainz and Leclerc into difficult track positions.

“It’s down to mistakes we need to analyze, a lot of situations that have not been in our favor. We made mistakes and I will take responsibility for that.”