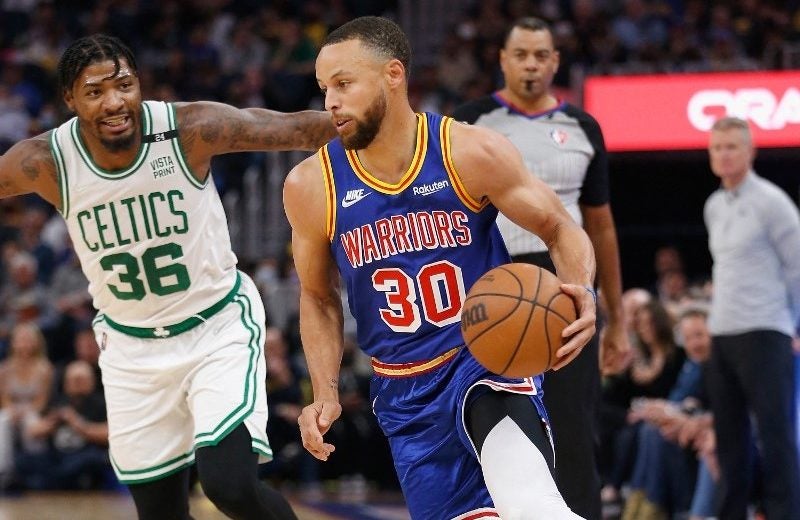 Stephen Curry #30 of the Golden State Warriors drives to the basket against Marcus Smart #36 of the Boston Celtics in the first quarter at Chase Center on March 16, 2022 in San Francisco, California. Lachlan Cunningham/Getty Images/AFP

One week before the regular season opened, the Golden State Warriors were 12-to-1 to win the NBA Finals.

Now, at the start of Finals week, the Warriors are favored to beat the Eastern Conference champion Boston Celtics and claim a fourth NBA title under Steve Kerr.

Some could be holding even larger potential payoffs on underdog Boston if they took advantage of major sportsbooks installing the new-look team as a 50-1 longshot.

The series underdog at +130 in the 2022 Finals, the Celtics are 3.5-point underdogs in Game 1, scheduled for Thursday (Friday in Manila) at Chase Center in San Francisco.

Just 10 days ago, Boston was still 10-to-1 to win the Finals at DraftKings, BetMGM and Caesars, and 12-to-1 at PointsBet.

A $250 bet before the Eastern Conference finals on the Celtics to win the title would pay $2,500 if Boston can pull the upset.

Read Next
Juico back in POC’s good graces; two new NSAs admitted
EDITORS' PICK
Karding damage to infrastructure at P23M
House energy committee chair Arroyo bats for cheap electricity
Reignite your passion with the vivo Y35
Individuals affected by ‘Karding’ now over 157,000
Bongbong Marcos says PH ‘open for business’ with new Clark Airport terminal
Newbie gamers are in for a treat with the power-packed feature of vivo Y16
MOST READ
LPA enters PAR, may develop into tropical depression
Angelica Panganiban ‘duguan, sugatang mom’ one week into breastfeeding
Security guard shoots 2 other guards dead inside Makati subdivision
Badoy not with Office of the President, NTF-Elcac, under Marcos admin — solon
Don't miss out on the latest news and information.