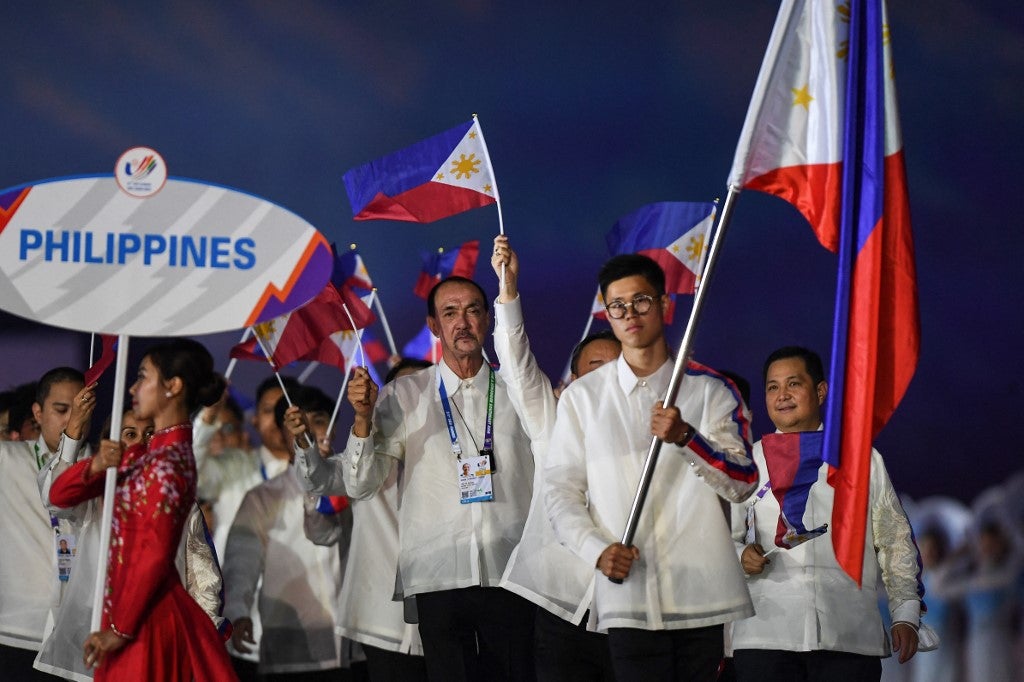 Members of the Philippine contingent led by pole vaulter EJ Obiena hold their national flags during the opening ceremony of the 31st Southeast Asian Games (SEA Games) at the My Dinh National Stadium in Hanoi on May 12, 2022. (Photo by Nhac NGUYEN / AFP)

The region’s sporting powers will have a shot at proving who is top dog among them when Cambodia hosts the 32nd Southeast Asian (SEA) Games next year.

The tradition of host countries running away with the overall title will be shelved with very few expecting Cambodia, a country of just over 17 million, to hoard a majority of the golds in Phnom Pehn.

“It’s anybody’s ballgame,” said Philippine Olympic Committee (POC) president Abraham “Bambol’’ Tolentino on Tuesday, when he guested in the Philippine Sportswriters Association. “That’s with due respect to Cambodia, of course.”

In the last three stagings of the biennial meet, the host country (2017 Malaysia, 2019 Philippines, 2022 Vietnam) had always won—in runaway fashion at that—the overall title. In the two previous SEA Games before those years (2013 Myanmar, 2015 Singapore), it was Thailand that won the overall titles.

The Philippines finished fourth (52 gold, 70 silver and 105 bronze medals) behind Vietnam, Thailand and Indonesia in the recent SEA Games.

A large fraction of those 70 silvers came from subjective sports and 27 of them against Vietnamese athletes.

“The host country has the advantage and we have to accept that,’’ said Tolentino.

And Tolentino is hoping the country can become a serious contender for the overall title in Cambodia, a relatively “neutral” host.

“We are looking to send a full contingent to Cambodia with entries in all sports. We’re just waiting for the final list of events,’’ said Tolentino.

Cambodia is set to lay down the list of events within the month, after which the POC will cascade the information to the national sports associations for them to plan ahead and prepare early.

Phnom Pehn will stage the Games on May 5 to May 16 next year.

“We can prepare early for a longer training period. Since the SEA Games in Vietnam is still fresh in our minds, we can review all our shortcomings during the competitions and improve on them going to Cambodia,’’ said Tolentino.