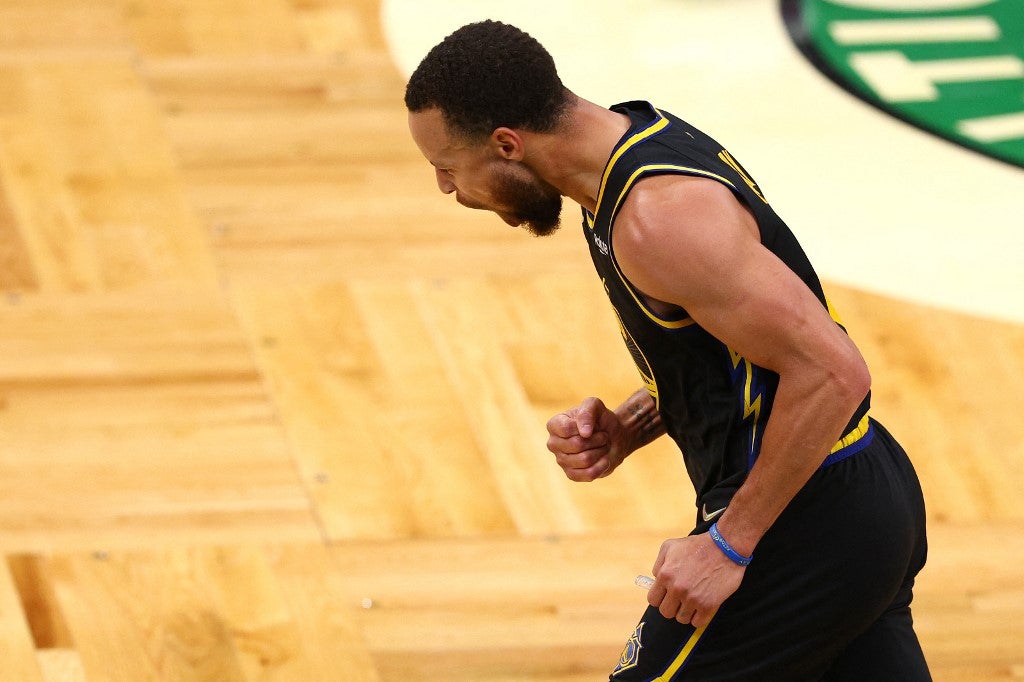 Stephen Curry #30 of the Golden State Warriors celebrates a basket in the fourth quarter against the Boston Celtics during Game Four of the 2022 NBA Finals at TD Garden on June 10, 2022 in Boston, Massachusetts. Elsa/Getty Images/AFP

Stephen Curry recorded 43 points and 10 rebounds and the Golden State Warriors evened the NBA Finals at two games apiece with a 107-97 victory over the host Boston Celtics in Game 4 on Friday night.

Curry made 14 of 26 field-goal attempts — including 7 of 14 from 3-point range — while moving with ease on the left foot he injured late in Game 3. His previous high in this year’s postseason was 34.

Game 5 in the best-of-seven series is Monday at San Francisco.

Golden State finished the game with a dominating 17-3 burst over the final five minutes.

Smart drained a 3-pointer to give Boston a 94-90 lead with 5:18 remaining, but the Warriors answered with 10 consecutive points. Wiggins scored on a putback, Thompson hit a 3-pointer and Curry sank a floater for a 97-94 edge with 3:49 to play.

Neither team scored for more than two minutes before Curry buried his seventh 3-pointer to make it a six-point margin with 1:42 to go.

Al Horford ended the Celtics’ drought by hitting a 3-pointer with 1:32 left. However, Golden State’s Kevon Looney made a layup with 1:04 to play and Curry sank 5 of 6 free throws down the stretch to seal it.

The Warriors scored the first five points of the third quarter to tie the score at 54, but Boston responded with a 9-2 push to move ahead by seven.

Curry scored 14 points in the quarter and made four 3-pointers, with three of the treys coming in the final 4:19. The last one gave Golden State a 79-78 edge with 58.5 seconds left in the stanza.

Tatum had 16 points as the Celtics led 54-49 at halftime. Curry had 19 before the break for the Warriors.

NBA: ‘Energy’ behind Celtics with chance to build lead on Warriors

NBA Finals: Draymond Green says he must be better as Warriors look to tie