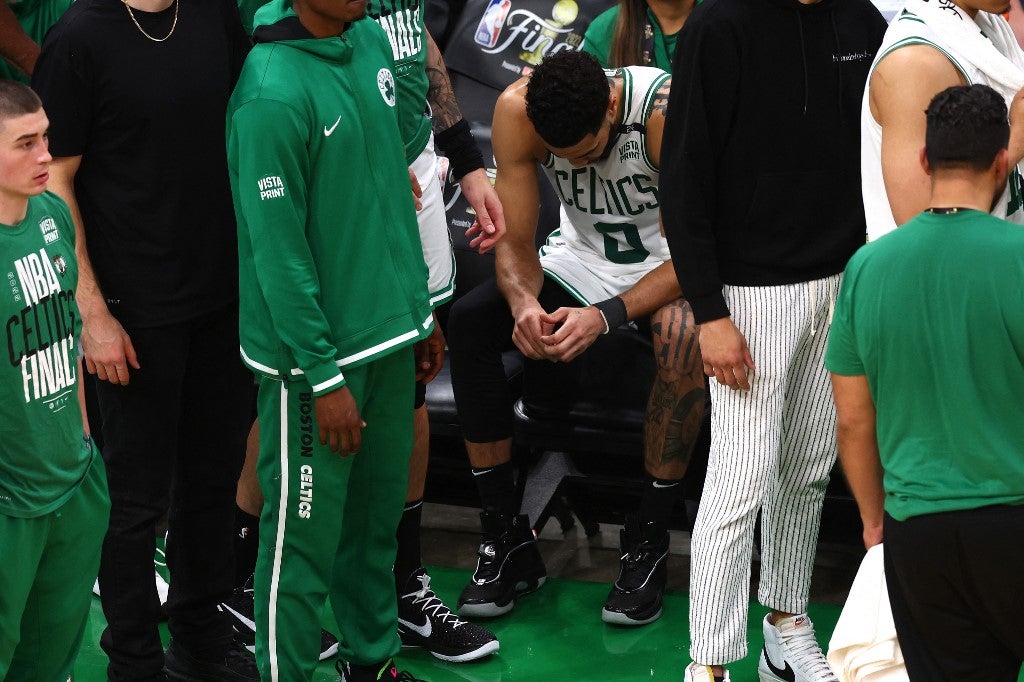 Jayson Tatum #0 of the Boston Celtics reacts on the bench against the Golden State Warriors during the fourth quarter in Game Six of the 2022 NBA Finals at TD Garden on June 16, 2022 in Boston, Massachusetts. . Adam Glanzman/Getty Images/AFP

Udoka and his Celtics players were forced to watch the Warriors celebrate in their own TD Garden arena after a 103-90 defeat completed a 4-2 series win.

The loss ended Boston’s hopes of a record 18th NBA Championship, and drew a line under a successful Celtics season that came up agonizingly short.

Udoka told his players he wants the sting of defeat to fuel a fresh tilt on the title next season.

“That was part of the message. Let it propel us forward, the experience,” Udoka said. “Growth and progress that we made this season.

“The biggest message was learn from this, grow from it, take this experience and see there is another level to get to. A team like Golden State who has been there, done that. It was evident in a lot of ways.”

Udoka said Boston’s run to the finals this season was “just the start.”

Draymond Green and Jayson Tatum share a moment after a hard-fought #NBAFinals pic.twitter.com/rxXTgX9xo1

“A foundation has been set,” he said. “We can kind of hit the ground running next year. Let’s get healthy and all be on the same page.

“We’ve seen what we can achieve. It hurts we fell short of that. But the future is bright and we’re just getting started, so let’s all come back better from this experience.”

Udoka said the Celtics’ loss of composure at key moments had also proved costly, and would add to the determination to improve next season.

“It’s tough. We’ve been through a lot this year as a team, as a group, individually, collectively,” Smart said.

“Every obstacle that was thrown in front of us, we prevailed and triumphed through it. Came up short tonight.”

Smart said that the Celtics would take Udoka’s challenge to improve to heart.

Jayson Tatum said the Celtics would need to “go up a level” to challenge next season.

“It’s hard getting to this point. It’s even harder getting over it, the hump, and win it,” Tatum said.

“It’s been a long journey, a long process. That’s what I took from it: it’s tough. You got to take it up another level to do what we want to do.”

NBA: ‘It’s not over’ as Celtics lean on experience ahead of elimination game