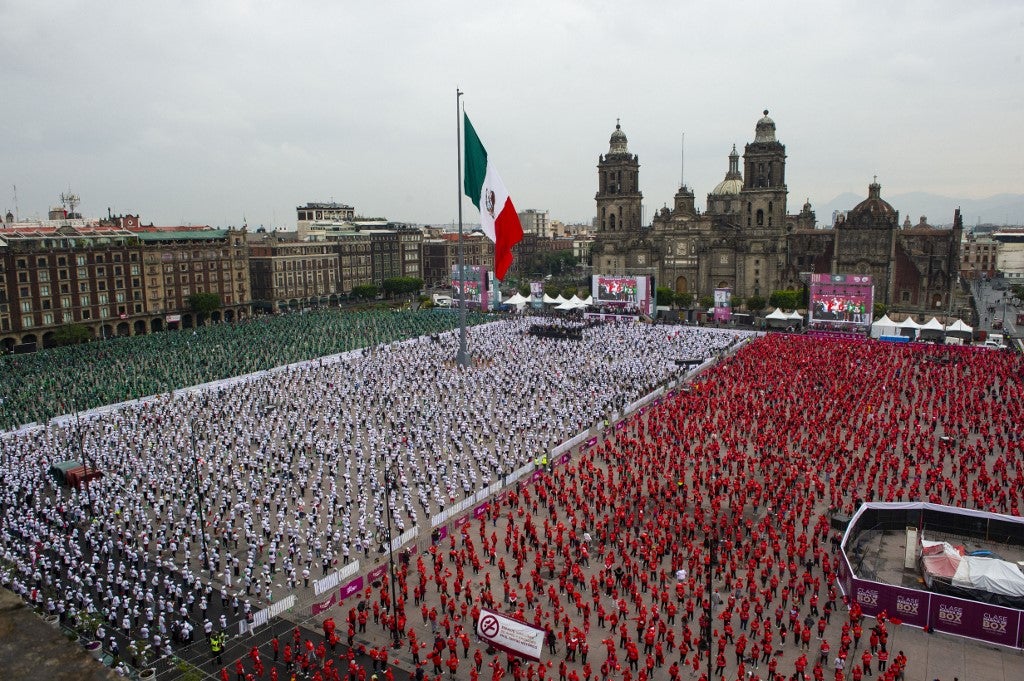 Aerial view of people taking part in a massive boxing class at the Zocalo square in Mexico City, on June 18, 2022. – Mexico City hopes to break the Guinness World Record of the boxing class with the most participants, currently held by Moscow with 3,250 people. (Photo by CLAUDIO CRUZ / AFP)

Mexico City has set a world record for hosting the largest boxing class ever, with 14,299 people taking part in a massive lesson in the capital’s central plaza, Mayor Claudia Sheinbaum announced Saturday.

That huge turnout easily surpassed the previous record, set in Moscow in 2017 when 3,000 people showed up for boxing class.

After Saturday’s attendance figure was certified by a Guinness World Records team, Sheinbaum posted a video thanking “the champions and those who made this great triumph possible.”

Hundreds of people had gathered early for the enormous class in Zocalo plaza, which began with a tai-chi warmup, followed by a review of basic boxing movements and then practice in various combinations of blows.

The turnout Saturday impressed many attendees.

Carmen Perez, 16, an urban dance devotee, said she was thrilled to take part.

“There is a very beautiful energy — very joyful, a lot of joy,” she said.

The event was organized by the Mexico City government, which had recruited such prominent figures as American actor Sylvester Stallone — Rocky Balboa on the big screen — and boxer Saul “Canelo” Alvarez to promote it.

Afterward, dozens of people swarmed the many professionals present to seek autographs.