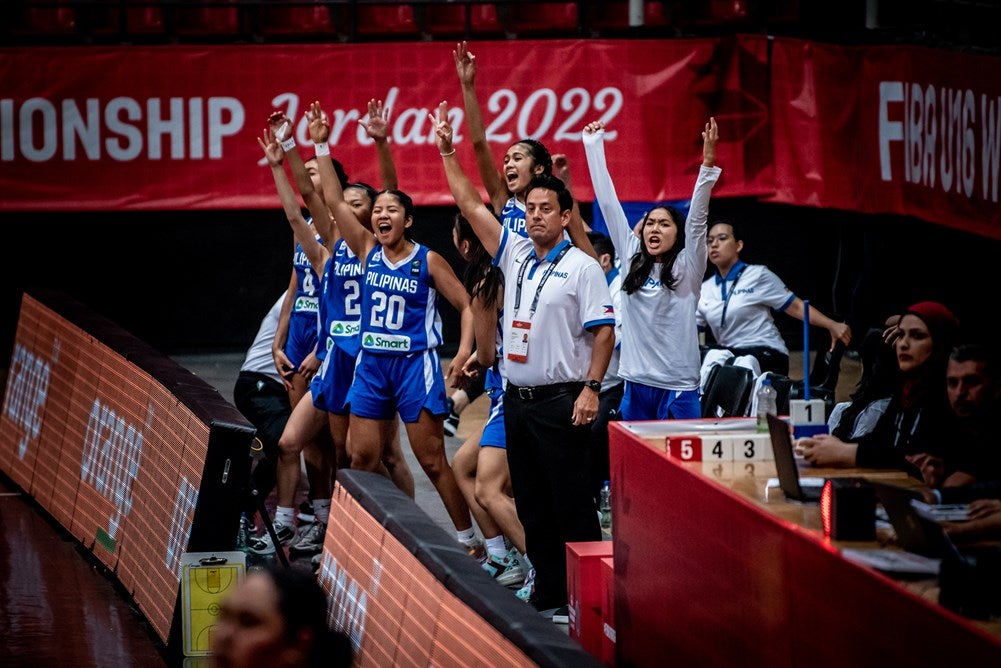 The Philippine team celebrates during a game against Samoa in the Fiba U16 Women’s Asian Championship. Fiba PHOTO

MANILA, Philippines—Gilas Pilipinas Women booked an outright semifinals slot in the Fiba U16 Women’s Asian Championship Division B after completing a Group A sweep with a 94-65 rout of Samoa on Sunday at Prince Hamza Hall in Amman, Jordan.

Coming off a 33-point explosion on Saturday night, Kristan Geyl Yumul sustained her hot shooting, leading the national youth team with 22 points on five 3-pointers to go with five assists, three rebounds, and two steals in 20 minutes and 13 seconds of playing time.

Yumul joined hands with Samantha Paulene Medina to ignite a second-half storm that stretched a 67-52 lead in the final minute of the third quarter to a 28-point spread, 83-55, thanks to a 16-3 run capped by Princess Villarin’s jump shot at the 7:03 mark of the payoff period.

The Gilas girls built the biggest advantage, 94-63, after Sierra Jade Patricio’s triple with 52.1 seconds to go, putting the exclamation point on their dominant group stage campaign.

The Philippines, which participated in the women’s u-16 for the first time since 2009, will play in the semifinals on Wednesday.

Gabby Ramos was limited to four points on 2-of-9 shooting but provided 10 rebounds, including five offensive boards, four steals, two assists, and a block.

Kira May Filemu had a monstrous double-double, 28 points, 27 rebounds, and seven assists for the Samoans. But it went for naught as she committed 14 of the team’s 30 turnovers.

Azaleeah Oloapu had 18 points and 12 boards as Samoa finished Group A with a 1-2 record.

Yumul, Ramos lift Gilas past Syria in Fiba Asia U16 Division B