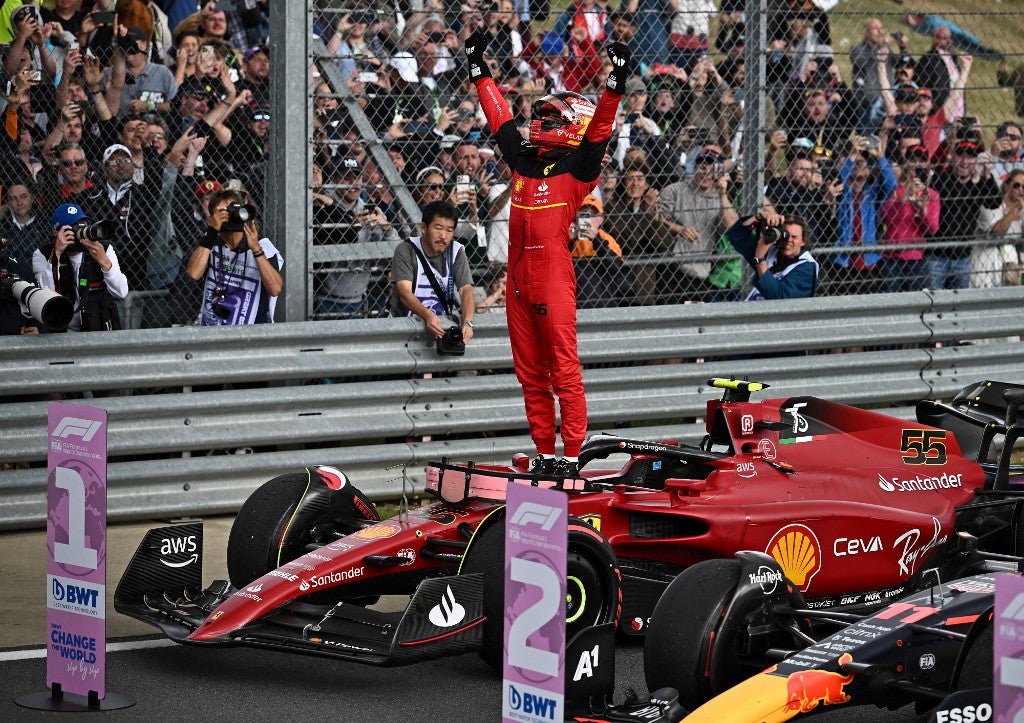 Carlos Sainz claimed his first Formula One victory in his 150th race on Sunday when he drove his Ferrari to a spectacular triumph in a furious and crash-hit British Grand Prix.

The 27-year-old Spaniard, starting from his maiden pole position, resisted a charging Sergio Perez of Red Bull, who recovered from 17th, to take the flag by 3.7 seconds in front of a record 142,000 crowd at the high-speed Silverstone circuit.

Drawing on his fresher tyres in the closing stages, Hamilton resisted and passed Charles Leclerc in the second Ferrari, who finished fourth ahead of two-time champion Fernando Alonso of Alpine and Lando Norris of McLaren.

World champion and series leader Max Verstappen finished seventh for Red Bull, recovering after picking up debris and suffering a puncture, ahead of a revitalised Mick Schumacher of Haas, four-time champion Sebastian Vettel of Aston Martin, who had started 18th and Kevin Magnussen in the second Haas.

“I don’t know what to say,” said a beaming Sainz. “It is amazing. My first win in Formula One on my 150th race and for Ferrari at Silverstone! It’s amazing.”

Perez was also delighted. “It was a great comeback,” he said.

“We never gave up and we kept pushing. We kept trying. It was epic in some of those final laps.”

Hamilton paid tribute to the crowd, saying Silverstone was unmatched around the world for the scale and depth of enthusiasm demonstrated at the British event, which on Sunday provided stunning entertainment.

“I gave it everything today,” said Hamilton. “I tried to chase, but the Red Bull and the Ferraris were too quick on the straights.”

After a long delay following a high-speed multi-car collision at the start of the race, which saw Zhou Guanyu make a remarkable escape after his car skidded upside down through a gravel trap, the contest re-started an hour later using the original grid order.

Three drivers were missing – Alfa Romeo’s Zhou, Williams’ Alex Albon and George Russell of Mercedes – as the lights went out and Sainz, in ferocious fighting mood, boldly resisted Verstappen to retain the lead from his maiden pole position.

Leclerc also made an aggressive start and banged wheels with Perez, who suffered front wing damage, and Verstappen before the order settled on lap five.

Hamilton, who had lost an early position to Norris, swept past him to the delight of his army of fans to regain fourth on lap six as Perez re-joined 17th at the back after a slow pit stop.

In a frantic spell of action, Sainz ran off-track and across the grass at Becketts on lap 10, gifting Verstappen the initiative again, but two laps later the Dutchman slowed and pitted with a puncture.

Sainz led again as a 3.1 seconds stop for Verstappen, who reported he had hit debris, dropped him to sixth.

Amid this drama, Hamilton closed on Leclerc before, on lap 21, Sainz pitted from the lead, Leclerc taking over ahead of Hamilton with the Spaniard re-joining third ahead of Norris.

Clearly inspired, Hamilton pushed again as Verstappen pitted again before Leclerc pitted on lap 25. He returned in third, behind Sainz, while Hamilton stayed out on his ‘mediums’ and revelled in leading a race for the first time this year.

Behind him, Ferrari told their drivers they were “free to fight” as Leclerc chased second-placed Sainz, who was 18 seconds adrift of Hamilton, but warned that a swap was needed. It duly came on lap 31 when Sainz let Leclerc by on Wellington Straight for second.

This left Hamilton 18.7 seconds ahead, before he pitted on lap 34 for ‘hards’, emerging third 3.4 seconds behind Sainz, but with tyres that were 13 laps fresher until a Safety Car intervention with 12 laps to go when Esteban Ocon’s Alpine came to a halt.

On the restart, Perez surged past Hamilton and Sainz overtook Leclerc to lead again, but it was tense stuff and as the Spaniard pulled clear, the trio behind him scrapped and swapped places with ferocious abandon.

Perez muscled his way to second, Leclerc and Hamilton fought and both Alonso and Norris closed to within a second, setting up a furious finale.