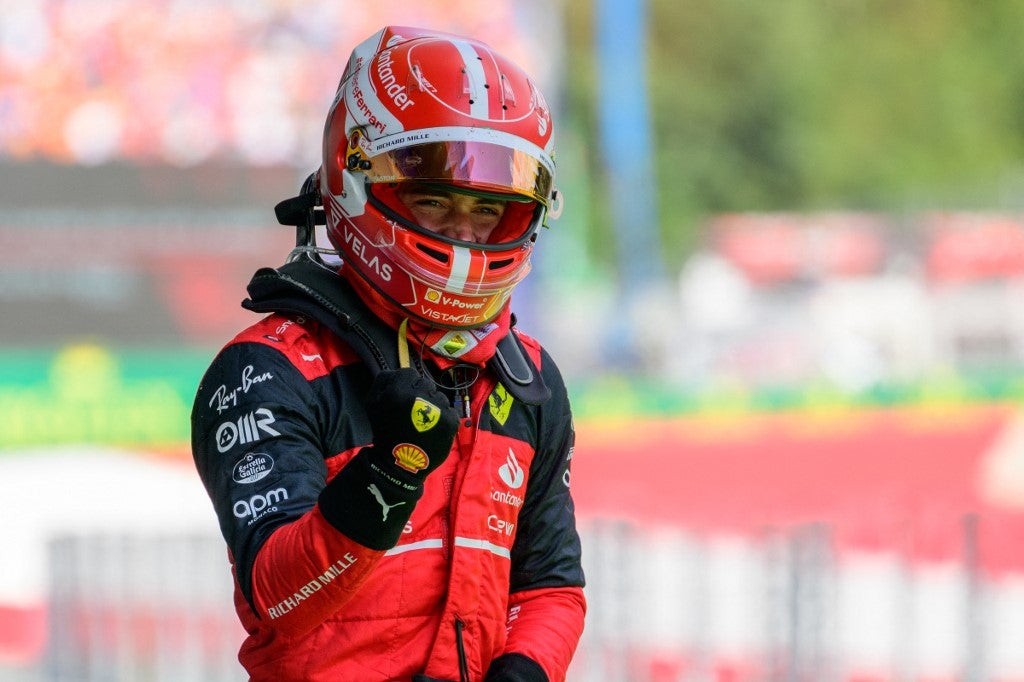 Charles Leclerc will seek to complete Ferrari’s first hat-trick since 2019 by fending off world champion Max Verstappen and a likely threat from reinvigorated Lewis Hamilton at this weekend’s French Grand Prix.

The 24-year-old Leclerc, who battled to victory in Austria last time out after teammate Carlos Sainz triumphed in Britain, is likely to enjoy strong support from a big holiday crowd sweltering in the merciless sunshine of south-eastern France.

But he will need to overcome several challenges if he is to further trim Red Bull star Verstappen’s 38-point advantage at the half-way mark in this 22-race season, not least from Sainz, who is keen to add to his maiden Silverstone success.

Ferrari team chief Mattia Binotto has made clear he will not issue team orders to support Leclerc –- not yet, at least -– and with potent attacks expected from Sergio Perez, in the second Red Bull, and George Russell, in the second Mercedes, a tight, combative and dramatic race is in prospect.

“We have closed the gap in terms of speed,” said Binotto, of Ferrari’s pursuit of Red Bull.

“I think they still have a slight advantage, but very little, or negligible.”

Given the forecast high temperatures of close to 40 degrees, Ferrari’s recent frailties could be exposed again as aerodynamics chief Diego Tondi suggested in a team preview.

“The high temperatures mean that ensuring the power unit and the tires perform at their best is a real challenge — and it’s up to those working on the aerodynamics to take the appropriate countermeasures,” he said. Ferrari’s hopes of an imposing one-two in Austria were wrecked by a late engine failure for Sainz while Leclerc’s title challenge has suffered after four likely wins escaped him due to car failures or strategy errors.

Well aware of the need for consistency, Binotto said he will avoid orders to favor either driver, but will prioritize the team’s overall points haul at each race.

“The fastest car on track is the one to be prioritized,” he said.

“By doing so, certainly at this time of the championship, it’s the best thing. Later maybe one driver has an opportunity for full priority, but not right now – I’m happy to see them fighting.”

Verstappen won last year’s race from pole position, passing Hamilton in the closing laps of a strategic race decided by tire wear, and the Dutchman will want to win to foil Ferrari and retain the initiative.

Between them Ferrari and Red Bull have won all 11 races this year, but they know that Hamilton, lining up for his 300th F1 start on a circuit where he won in 2019 and 2020, is returning to form and that his revised Mercedes performs well on smooth circuits with fast corners.

The seven-time world champion has had three consecutive third places and has rebuilt his confidence.

“I truly believe we can get a race win this year,” he said, looking to extend his unique record of winning a race in every season of his career since 2007.

Curiously, Hamilton will give up his seat for the Dutch Formula E champion Nyck de Vries in Friday’s opening free practice as part of a mandatory scheme in which every team has to use an inexperienced driver at least twice per season.

“We scored three podiums in the first seven races and we have four in the last four,” said team chief Toto Wolff, who confirmed Mercedes will run more updates in France.

“I’m pleased with the momentum — it reflects the mammoth effort of the team.”