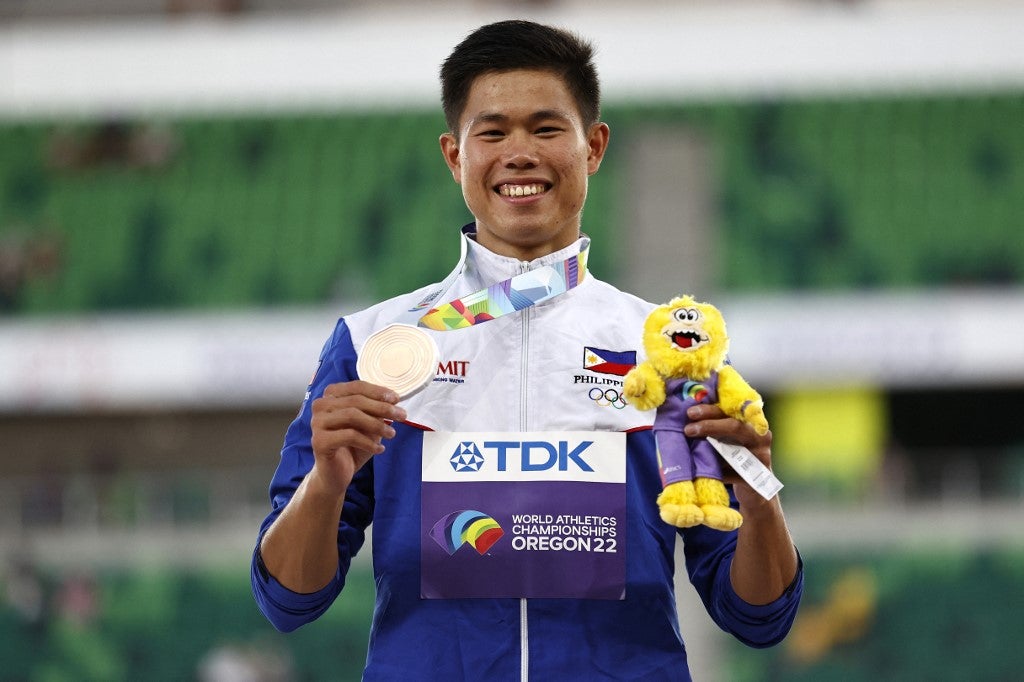 Bronze medalist EJ of Team Philippines poses during the medal ceremony for the Men’s Pole Vault on day ten of the World Athletics Championships Oregon22 at Hayward Field on July 24, 2022 in Eugene, Oregon. Steph Chambers/Getty Images/AFP

MANILA, Philippines—EJ Obiena was far from satisfied when he made the pole vault final at the World Athletics Championships.

Obiena reset the Asian record and his personal best with a 5.94-meter clearance on his second try to become the first Filipino to make the podium on the world championship stage.

“This was something I really wanted but I do not know if I was expecting it,” Obiena said. “I definitely did not expect that I would jump that high. And I would not think that it would actually take that high to win a medal.”

Obiena tried his luck at 6.00m but he couldn’t get off the ground on all of his three attempts. The 26-year-old Obiena has been on a roll this year having won six gold medals. Before the worlds, Obiena was coming off a golden performance in the Jump and Fly meet in Germany.

Duplantis was the only competitor to reach 6.00m and went on to break the world record anew at 6.21m.

Brazilian star Thiago Braz, the 2016 Olympic champion and training partner of Obiena, also fell short on his one-and-done attempt at 6.00m, leaving the competition with only three men remaining. With report from Reuters

Read Next
Vingegaard wins maiden Tour de France title
EDITORS' PICK
Karding damage to infrastructure at P23M
Newbie gamers are in for a treat with the power-packed feature of vivo Y16
Individuals affected by ‘Karding’ now over 157,000
Bongbong Marcos says PH ‘open for business’ with new Clark Airport terminal
House energy committee chair Arroyo bats for cheap electricity
Reignite your passion with the vivo Y35
MOST READ
Angelica Panganiban ‘duguan, sugatang mom’ one week into breastfeeding
LPA enters PAR, may develop into tropical depression
Badoy not with Office of the President, NTF-Elcac, under Marcos admin — solon
Charges readied vs gov’t guard with P290-M deposits
Don't miss out on the latest news and information.