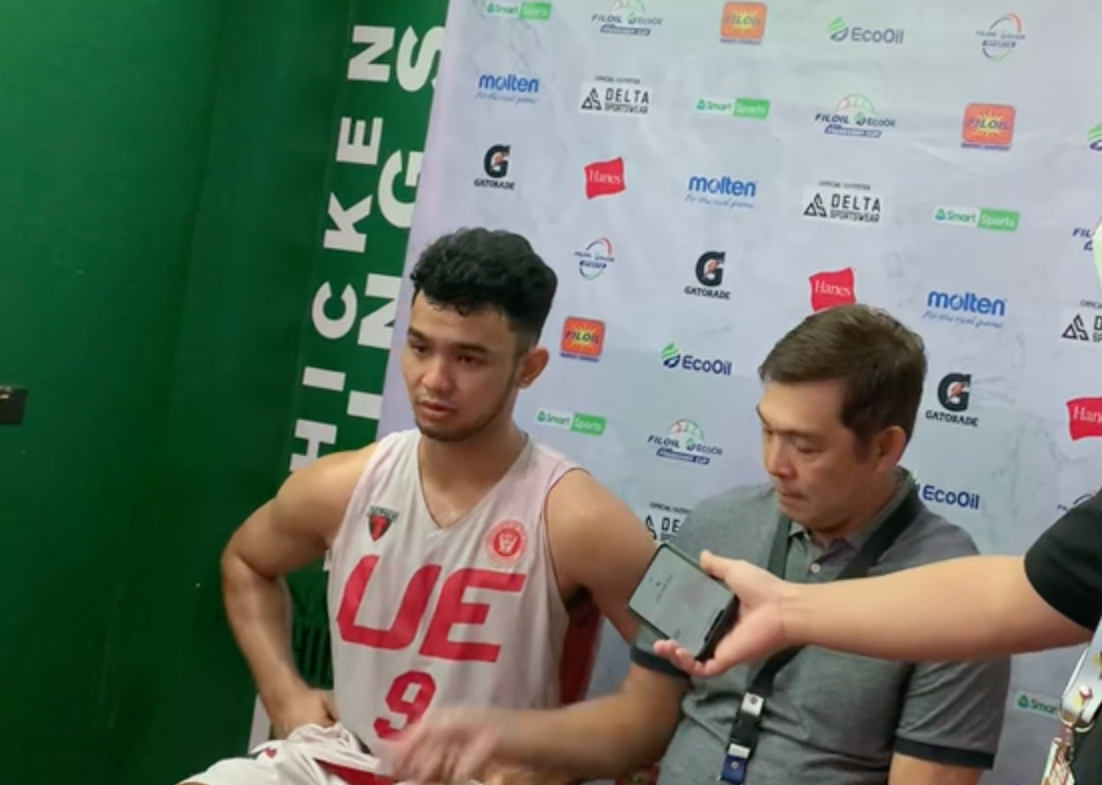 An emotional Harvey Pagsanjan during the post-game interview after UE’s win in the Filoil Preseason Cup.

MANILA, Philippines–Harvey Pagsanjan couldn’t help but get emotional after the University of the East’s win over the Arellano in the Filoil EcoOil Preseason Cup that ended the Warriors’ 17-game losing streak.

After the 58-50 victory on Wednesday, Pagsanjan broke down in tears during the post-game interview, reminiscing the team’s rocky road to their first win since 2019.

“Even if that [losing streak] what happened to us, there are still a lot of people who believe in us and that’s what we’re trying to do, get a winning culture,” Pagsanjan said.

“I’m really thankful. Every day in training, we process the patience that the coaching staff gives us. It’s one of the things that motivate us every day.”

UE head coach Jack Santiago was quick to console and credit the guard’s efforts in leading the team as a veteran.

An emotional Harvey Pagsanjan is consoled by UE head coach Jack Santiago after their win against the Arellano Chiefs in the Filoil Preseason cup, their first since UAAP Season 82 in 2020. | Rommel Fuertes/Inquirer Sports

“Every day and every practice, we give him the responsibility. I know it’s hard for him because remember, we [coaching staff] still consider him as a rookie,” Santiago said.

Pagsanjan had been set to play for UE much earlier. However, due to the COVID-19 pandemic, the guard’s rookie year started in UAAP Season 84.

The 6-foot guard showed glimpses of his Season 84 prowess in UE’s win with nine points. He averaged 13.4 points per game for the Warriors.

With the departure of fellow guard Clint Escamis, he is set to be a cornerstone for UE alongside Nikko Paranada, who scattered 17 points in Wednesday’s game.

Pagsanjan will still have two years to play for the UAAP.