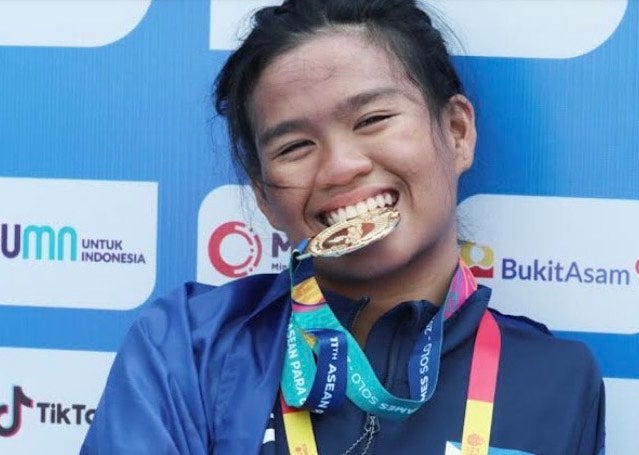 Rookie Angel Otom takes a bite at her gold medal after winning the women’s 50-meter butterfly S5 event on the way to emerging as the country’s first triple gold medalist in the 11th Asean Para Games at the Jatadiri Sports Complex pool in Semarang, Indonesia. –CONTRIBUTED

MANILA–Philippines–Angel Otom scooped two more gold medals in the pool and emerged as the first triple-gold performer for Team Philippines at the 11th Asean Para Games on Thursday.

The 19-year-old pride of Olongapo City ruled the women’s 50-meter butterfly S5 event in 48.070 seconds, shattering the 17-year-old standard by nearly eight seconds established by Singapore’s R.T. Goh (56.80) in the Manila Asean Para Games back in 2005.

Vietnamese swimmers Thi Sari Nguyen and Thi My Thanh were never in contention for the gold, finishing second (1:14.15) and third (1:32.46) to complete the podium.

Otom increased her personal gold collection to three in the women’s 50m freestyle S5, clocking 41.40 seconds in a performance that was never threatened from start to finish to the delight of her parents Marlou and Mila Otom, who watched their daughter’s triumph.

Otom first struck gold in the 50m backstroke S5 at the start of swimming competitions on Monday.

Ernie Gawilan picked up his second gold medal in the men’s 200m individual medley SM7 and broke the existing record as well in 2:49.530. The previous standard was established by Thailand’s Salungyoo Rawin (4:00.02) in the 2008 Bangkok Games.

The combined five gold medals in both swimming and athletics jacked up the Philippine medal standings to 19 golds, 16 silvers and 34 bronzes, just a gold away from tying its 2017 Kuala Lumpur overall output of 20 gold medals.