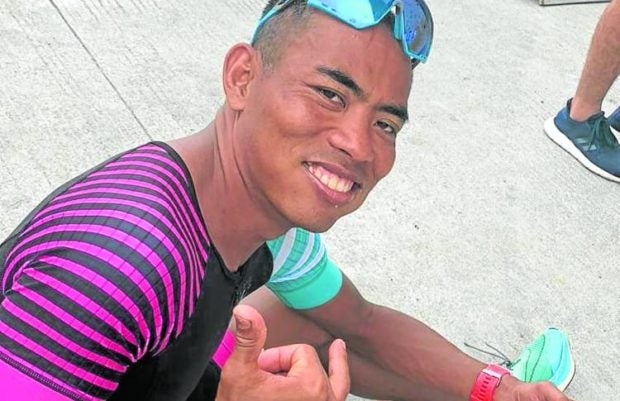 Wherever life will take him, August Benedicto will always have reason to be happy.
—MUSONG R. CASTILLO

A day removed from the biggest triumph of a triathlon career that could be cut short, August Benedicto traveled from Cebu to Pampanga on Monday to return borrowed equipment he used in the bike leg to dominate the Ironman 70.3 Philippines.

He said that he can definitely recoup the more than P100,000 he spent to get from Germany to here from the undisclosed prize money, but unlike most of the top finishers who were rewarded slots to the World Championship slated in Finland next year, he’s not going there.

“I might not take it, in all likelihood,” Benedicto told the Inquirer in Filipino hours after triumphing at The Mactan Newtown last Sunday with a time of four hours, 29 minutes and 16 seconds for the 1.9-kilometer swim, 90-km bike and 21-km run race. “I don’t have sponsors and expenses to go there (Finland) could easily triple the expenses to here.”

He talked about it still wearing that wide smile, but it was easy to sense that he’d go under different circumstances.

The former Anna Stroh, a German ex-triathlete who is now married to Benedicto, paid for the plane ticket of the former ice delivery boy to come home and compete in the Ironman.

But Benedicto is looking at things from another perspective—not just that from an Ironman’s.

“I am a house husband to our two kids back home [in Germany],” Benedicto said. “My wife has gone back to college and she’s the only one earning for the family—the allowance she gets from the German government.”

“I wouldn’t want my family to spend for my competition in Finland [for the World Championship],” Benedicto said. “My kids can use the money more.”

Benedicto said that he will not have second thoughts ending his career, especially after winning in Cebu. He can go out as a winner over a tough international field that included 67 entries from the United States and scores more from 45 other countries.

“Of course, if a sponsor comes up, I’d be more than willing to go, to train hard and represent them well,” Benedicto said. “Otherwise, I’ll continue to look after our kids and take care of them well.”

That sounds like a solid plan for the 38-year-old Benedicto.

But of course, things can change. Like when Anna gifted him with a plane ticket back to the Philippines for his birthday he spent away from family last Aug. 2 to be able to compete.

And in Cebu, he represented his family well. INQ