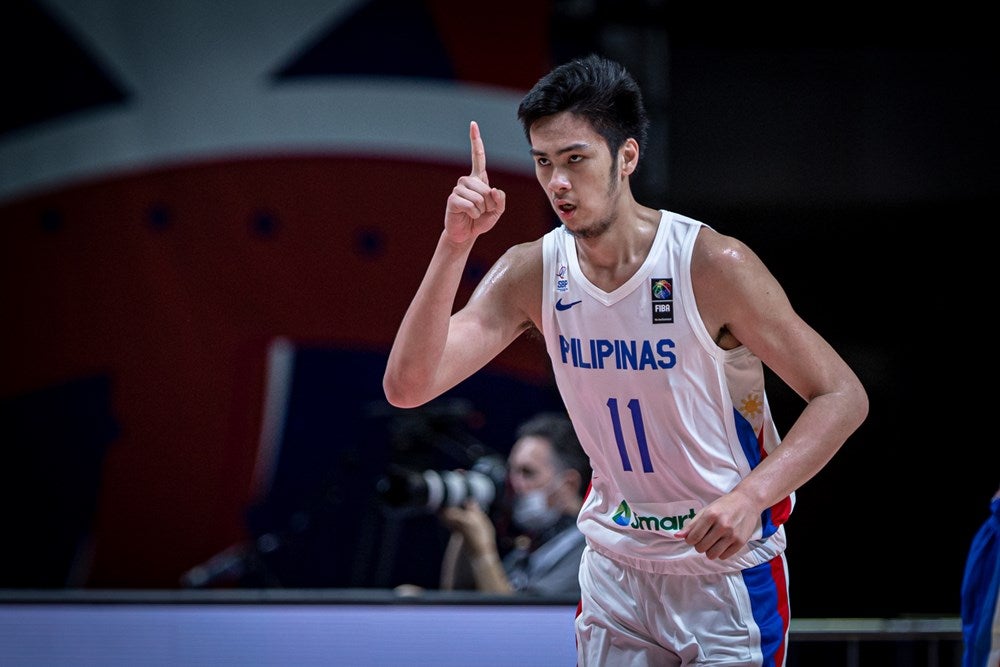 Unless “lightning strikes,” Kai Sotto is close to committing to the national pool.—FIBA.BASKETBALL

The decision to peg Jordan Clarkson as Gilas Pilipinas’ naturalized player for the 2023 Fiba (International Basketball Federation) World Cup has left the national basketball program scrounging for local big men—and one of them may be close to making a much-awaited commitment.

Samahang Basketball ng Pilipinas (SBP) executive director and spokesperson Sonny Barrios on Tuesday said the most recent talks with Kai Sotto’s camp has given him optimism that the 7-foot-3 center will officially join the national program.

“As we speak right now, I have a lot of optimism that he is more in than he is out of Gilas Pilipinas,” Barrios said.

Earlier, Barrios acknowledged that the national federation is already doubling its efforts to get Sotto to commit to the national team while checking constantly on the status of AJ Edu, the former Batang Gilas standout who is struggling with a knee injury.

“We’re looking at Jordan Clarkson as our naturalized [player for the World Cup],” Barrios told the Philippine Sportswriters’ Association forum Tuesday. “It’s like automatically … our big men would be locals, right? Because Clarkson is not a big man, and we are only allowed to field one naturalized player. So that’s when the question of who will be are going to be our local big men comes in.”

“Let’s start with the most veteran, June Mar Fajardo. And then we have AJ Edu who, unfortunately, is still coming back from injury. And then we get to Kai Sotto. From what I understand, he wants to play for Gilas. We are still talking to him.”

The Fiba has ruled with finality that Clarkson can only see action for the Philippines as a naturalized player and Barrios said the SBP will no longer appeal the decision.

“[A]t the level of talks that we’ve had [with Fiba] … they already said no,” Barrios said. “And if we insist, we risk being told ‘what part of no don’t you understand?’

“We are playing with the cards that are dealt to us. We’ll not sit on our hands and feel sorry for ourselves. We didn’t get the ideal outcome, but we’ll move forward.”

Multiple sources told the Inquirer the SBP is moving the Sotto plan forward on different fronts—talking to the Adelaide 36ers, Sotto’s management and the player’s family. SBP president Al Panlilio said Sotto would need to free himself for the three months before the World Cup if he wants to join Gilas Pilipinas.

“We are talking to the right people as far as Kai is concerned and unless lightning strikes or something, I am optimistic that we will have him for the national team,” Barrios said.

Clarkson was tapped by the national federation to banner Gilas Pilipinas in the second round of the Fiba World Cup Asian Qualifiers which cage leaders are using as an “evaluation period” for the World Cup that the Philippines is set to co-host with Japan and Indonesia.

“We engaged Mr. Clarkson for this [August] window because he won’t be available in window five and window six,” Barrios said. “We wanted him to get a feel of the team we have now or at least the pool that we are using nowadays.”

“We have several players we’re trying out, because the approach is we have the luxury of looking at different talents, talents that are available to us between now and when we go hard training beginning April 29 next year,” he added. INQ