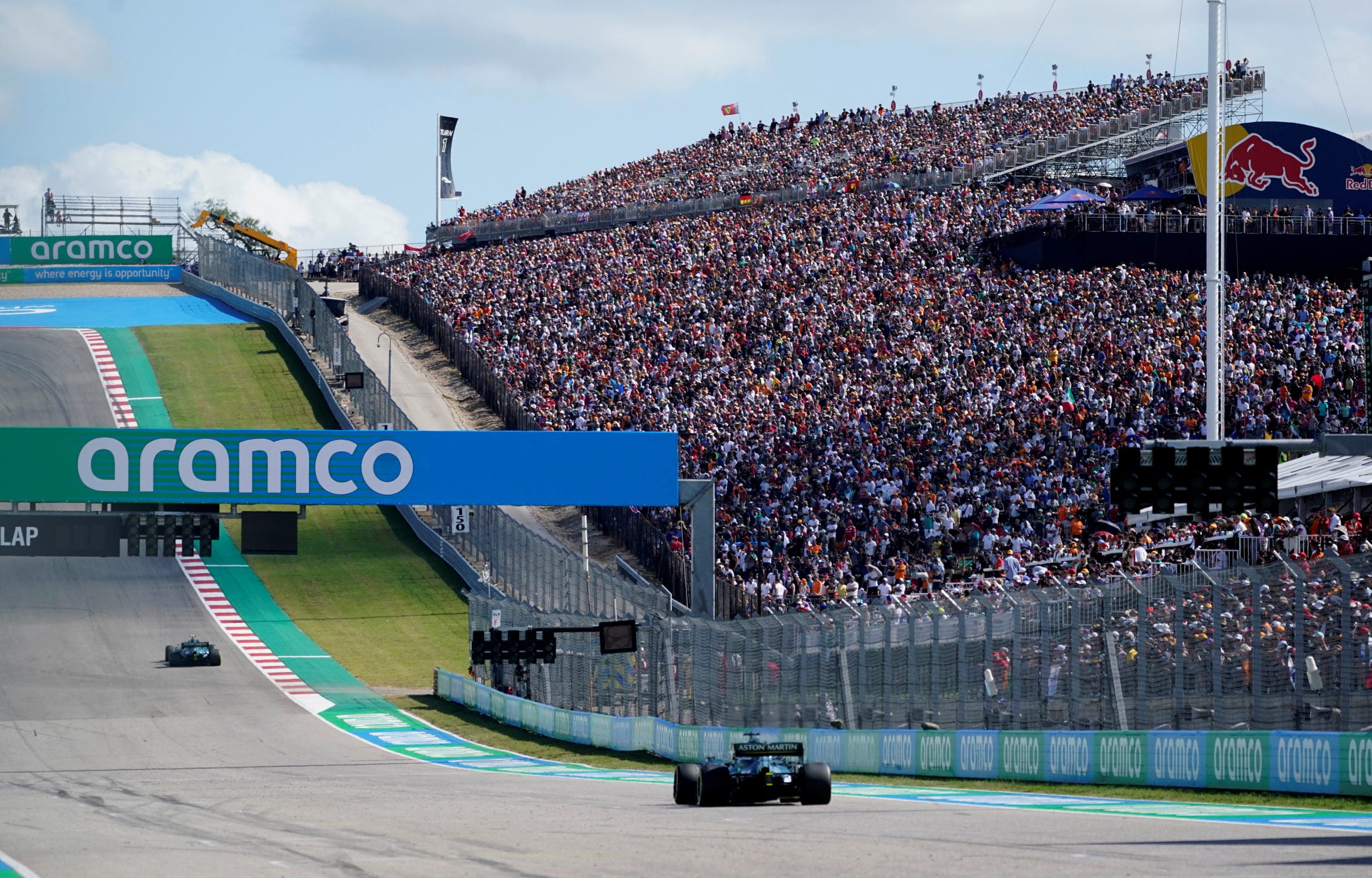 FILE PHOTO: Formula One F1 – United States Grand Prix – Circuit of the Americas, Austin, Texas, U.S. – October 24, 2021 General view of the fans in the grandstand during the race Pool via REUTERS/Darron Cummings/File Photo

U.S. Grand Prix promoter Bobby Epstein has twice seen the Formula One title settled at his Austin track but this year he hopes the battle goes on for longer.

It now looks highly unlikely the fight will go down to the wire, as happened last year in the battle to the last lap between the Dutch driver and Mercedes’ seven time world champion Lewis Hamilton.

“I have to say that when we get the championship concluded here, it’s less exciting than when it comes down to the last lap of the last race,” Epstein, whose Oct. 23 round is sold out, told Reuters.

“Everyone likes to see excitement so in many, many ways I hope the championship doesn’t end here. I think it’s better for the sport if it goes as long as it can into the season.”

This year COTA is celebrating its 10th anniversary after a debut in 2012.

Austin last year had F1’s largest live attendance with 400,000 fans over the weekend.

“We could easily eclipse (last year’s crowd) if we put (more) tickets on sale,” said Epstein. “Our capacity is less constrained by the on-campus facilities than by wanting to get people in and out of the venue with a good experience.

“Americans maybe more than elsewhere aren’t patient with lines and have high expectations with traffic and logistics.”

A newly-enlarged access road, and more grandstands, could see an increase in future. 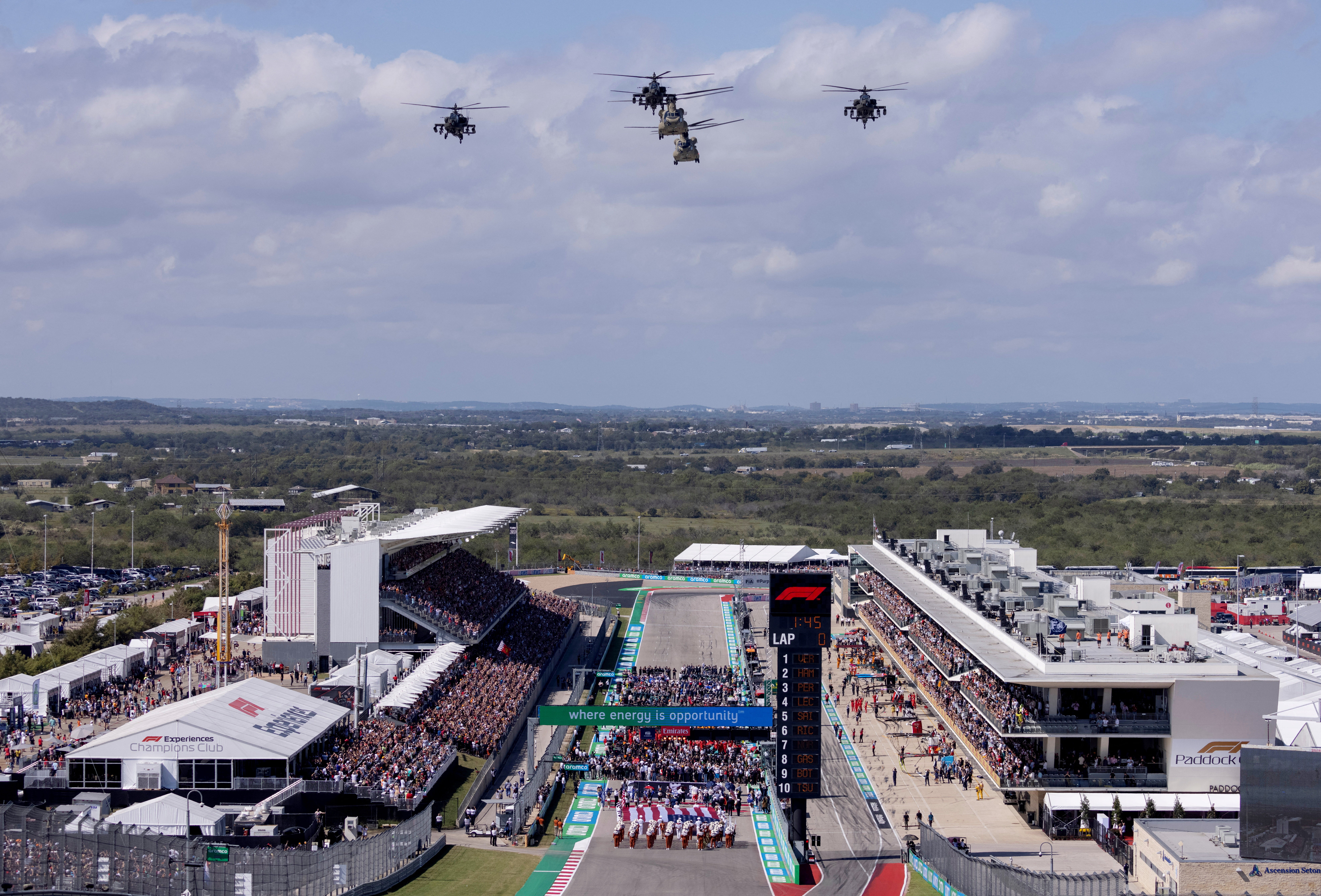 FILE PHOTO: Formula One F1 – United States Grand Prix – Circuit of the Americas, Austin, Texas, U.S. – October 24, 2021 General view as military helicopters do a fly by before the start of the race REUTERS/Mike Blake/File Photo

Austin will be the second U.S. round of the year, after Miami in May, and next season Las Vegas debuts as the sport enjoys a boom in popularity and new audiences.

Much of that has been driven by the Netflix ‘Drive to Survive’ docu-series but Austin, proud to be different, attracts a knowledgeable and passionate fanbase built up over years.

“Miami has the glitz and the glamour and the wonderful destination that Miami is and the international flavour there. Las Vegas is just bold America in the most entertaining way,” he added.

“What we see with our purpose built circuit is on-track competition that really satisfies the true racing fan in terms of just the ability to overtake and the hills and the curves and the fact that fans can see eight or 10 turns from one seat.”

There has been talk of more U.S. races beyond the current three but Epstein said any alternation with other cities offering temporary tracks would be difficult.

“It costs over $150 million just to put on a race the first time, even on a non-permanent circuit,” he said, citing the cost of communications cabling, pit and paddock infrastructure and track resurfacing.

“To move it around, it’s high risk, a huge expense and (it’s) hard to ask someone to do a one-off and then not come back the next year because you have to invest so much even just to do it once.

“You can absolutely do it if you’re working with permanent circuits … how you used to just rotate back and forth between Hockenheim and Nuerburgring (in Germany), that’s very doable.”

Formula One could expand to 24 races next year, with talk of some European rounds such as Belgium, France and maybe even Monaco being held in alternate seasons.

TAGS: Formula One, US Grand Prix